At face-value it's understandable why people and families turn to shelters to adopt puppies and kittens first and foremost but upon a little deeper digging it's impossible not to see what a tragedy it is how easily humans overlook the value in a senior pet. This rings especially true for senior cats, calm and patient in their old age they often desire little more than snuggles and cuddles and all the love you have to offer a pet who needs you.

Such was the case for one 15-year-old "scraggly" cat who found his way to the Voorhees Animal Orphanage, where staff quickly noticed his persistent longing for affection.

A suitable name for a classy, older cat is most certainly Barnaby and that is what the Voorhees Animal Orphanage named their aging cuddle companion. The entire staff found themselves smitten with the kitten, hearts melted around him.

"This super affectionate fellow shouldn't be spending his golden years in the shelter," the shelter said. 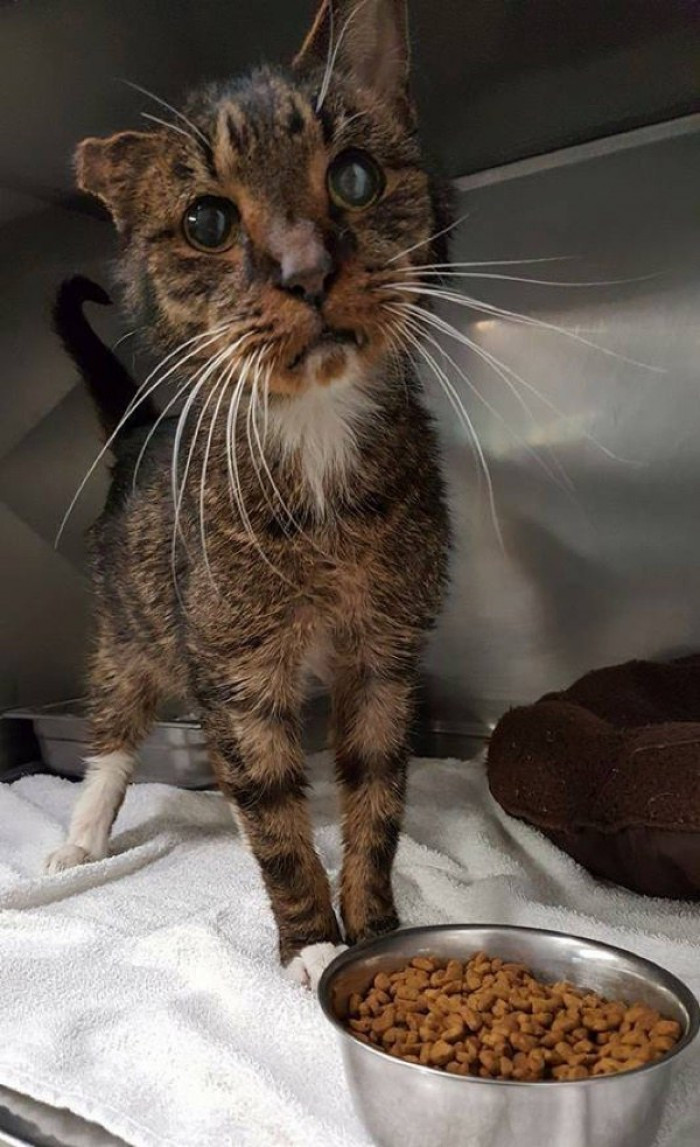 As we previously eluded to, adopting senior kitties can be an uphill battle. Not enough people realize the potential of relentless love sweet cats like Barnaby have to offer, but thankfully, fate had plans for Barnaby that didn't involve the last of his days in the Animal Orphanage.

Before any hope could stand to be lost, Dr. Ed Sheehan and his wife Clare Sheehan of Sheehan Veterinary Centre came across the Orphanage's post on Faceook, advertising Barnaby up for adoption. Clare said:

When we saw his picture, etc on Facebook we felt that he really needed lots of vet care just on his age and appearance.

So they contacted the shelter right away and said they wanted to adopt him. The staff at Voorhees couldn't have been happier! He went home with Ed and Clare. 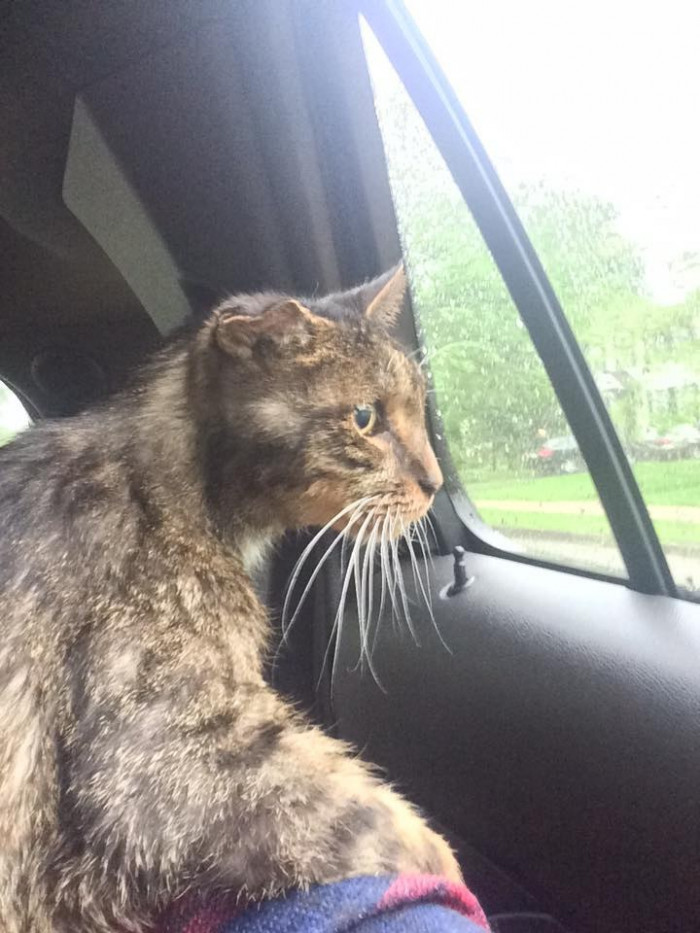 Ed brought Barnaby to his veterinary office for a full work up, blood tests included and immediately the entire staff fell head over heels in love with sweet Barnaby. His love was infectious.

And for Barnaby? He realized immediately he was right at home and offered no hesitation to strut around the office like he owned the place.

When mopping the floors he followed behind to make sure no spot was missed, and at the end of the night he sits on my lap to make sure I do the books correctly.

He clearly took the role of su-purr-visor seriously. 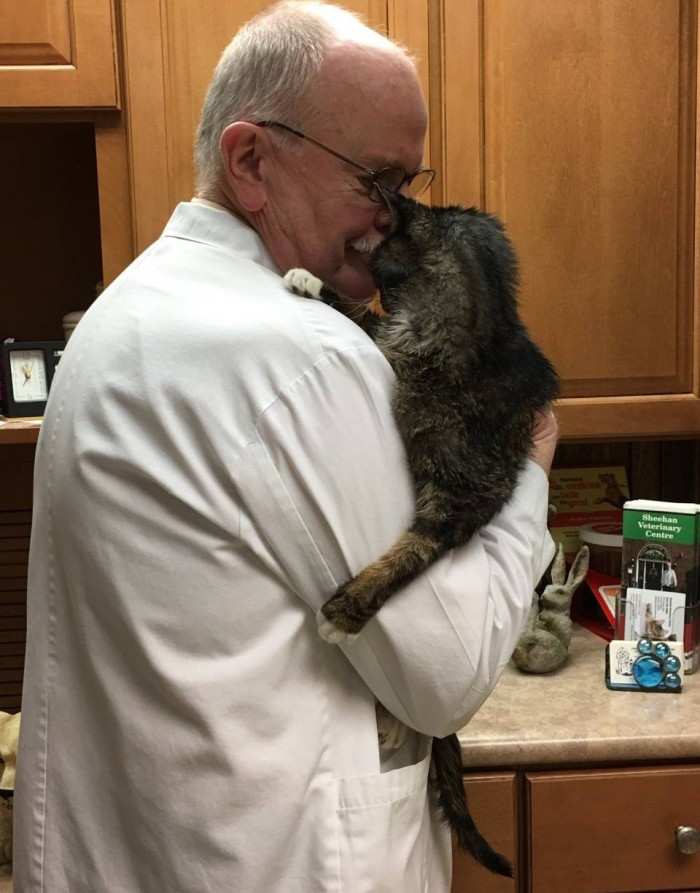 Barnaby did indeed need some medical care but he was in the right place for it.

We have him on antibiotics and he seems to be improving! He has put on weight (almost a whole pound), and his coat is even starting to look better. 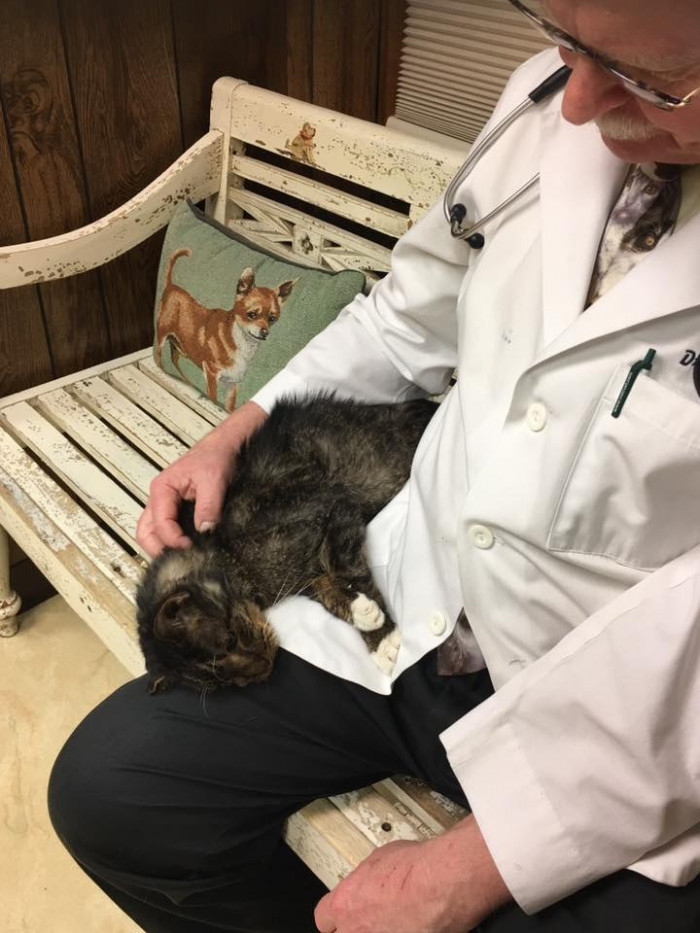 Spirited and sweet, Rachel went on to describe what life was like with Barnaby around the office:

He loves his special senior food, and enjoys being brushed regularly. He also takes his antibiotics like a champ and doesn't complain at all. 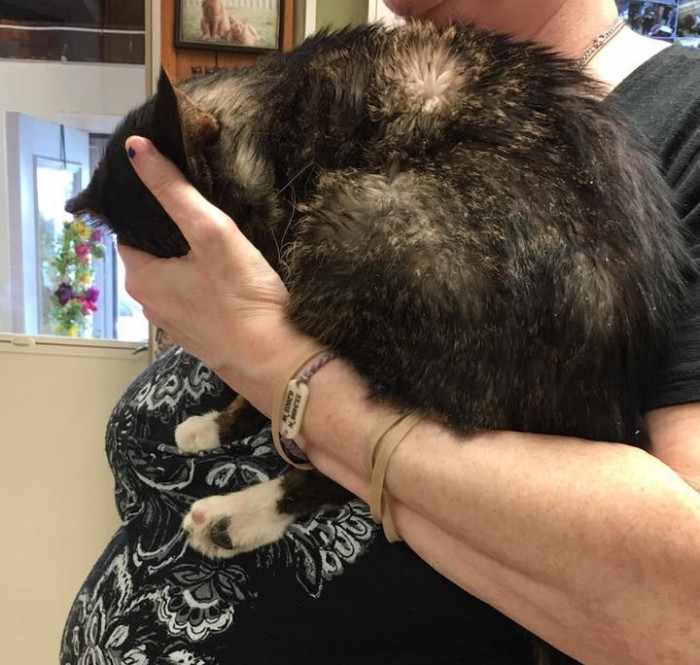 It was at a mere glance in a photo on a Facebook post that Dr Ed and his wife Clare knew Barnaby would need special veterinary care that the average family could probably not afford, which would make finding him a forever home astronomically more difficult than it already was to adopt a senior kitty.

But Ed and Clare could also see that Barnaby was deserving of that second chance at life and they didn't hesitate to offer it to him. Clare said:

Barnaby is more than a 'house cat' to us. He is well loved and very cared for by Dr. Sheehan, myself and our entire staff that he loves 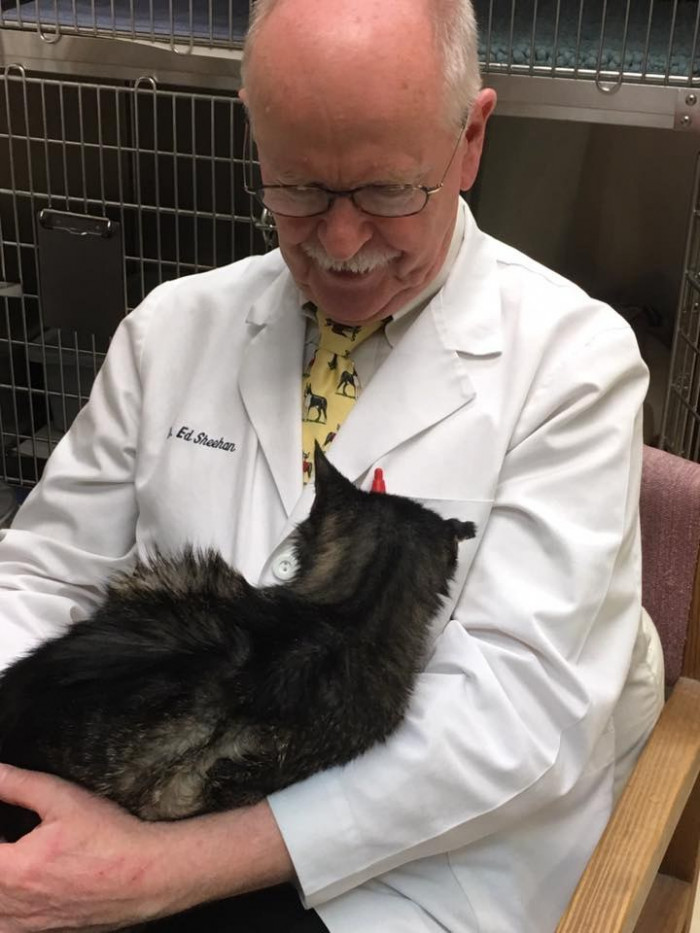 Barnaby is old and sometimes he doesn't have the appetite he needs to have to maintain a healthy weight, but he is so loved that his nurses will spoon feed him cat food gravy and extra vitamins in a cat food formula.

Also Doc noticed his dilated pupils. He feels it's his old age as he doesn't see much. He has adjusted well and is getting lots of love and care. He's a happy boy. 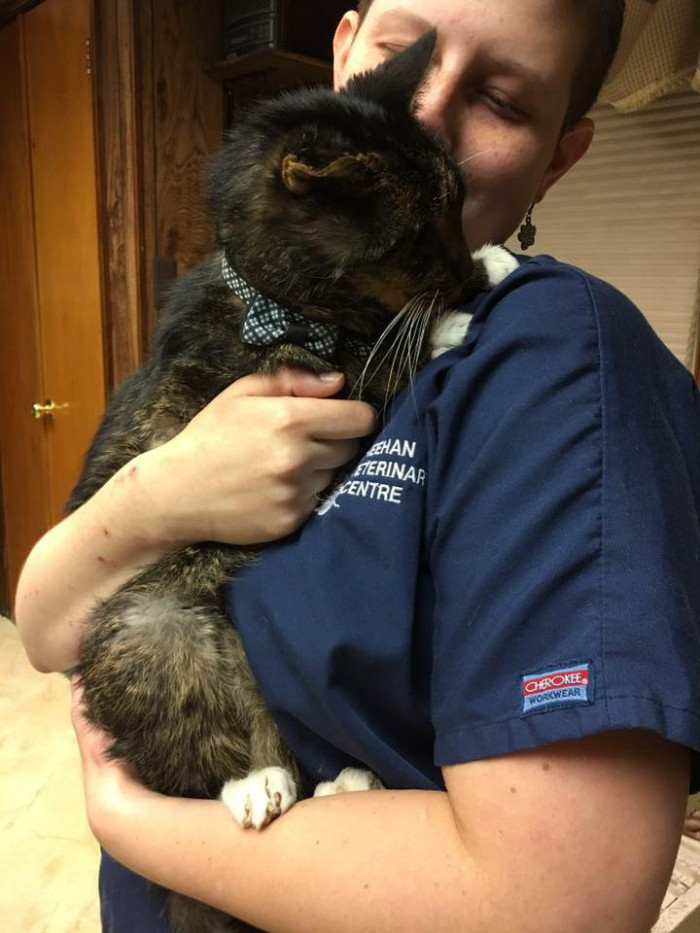 Clearly, Clare and the rest of the crew at Sheehan Veterinary love Barnaby very much:

Keeping him healthy and happy is our goal and to make the rest of his life a happy one. Who knows the trials and tribulations he went through but now his Veterinarian Dad and I and the rest of his Vet Tech and Assistants family will love and care for him. 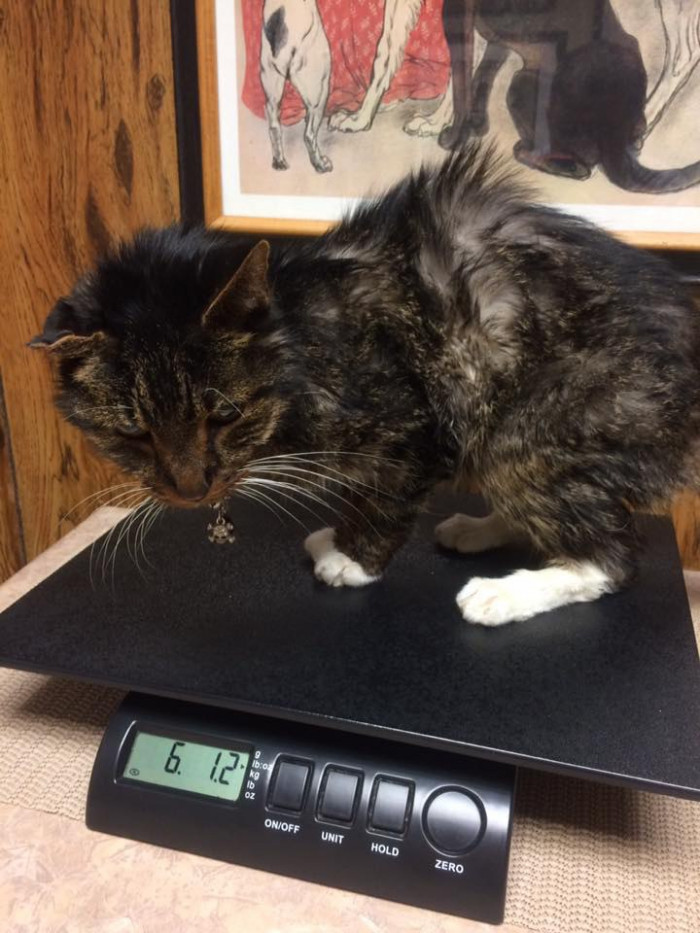 The Sheehan crew maintains a Facebook group now where they regularly share updates on Barnaby and other animals.

We here at Sheehan Veterinary Centre believe that every pet deserves a good home. As such, we frequently house many of our local stray cats looking for a "furrever" home. 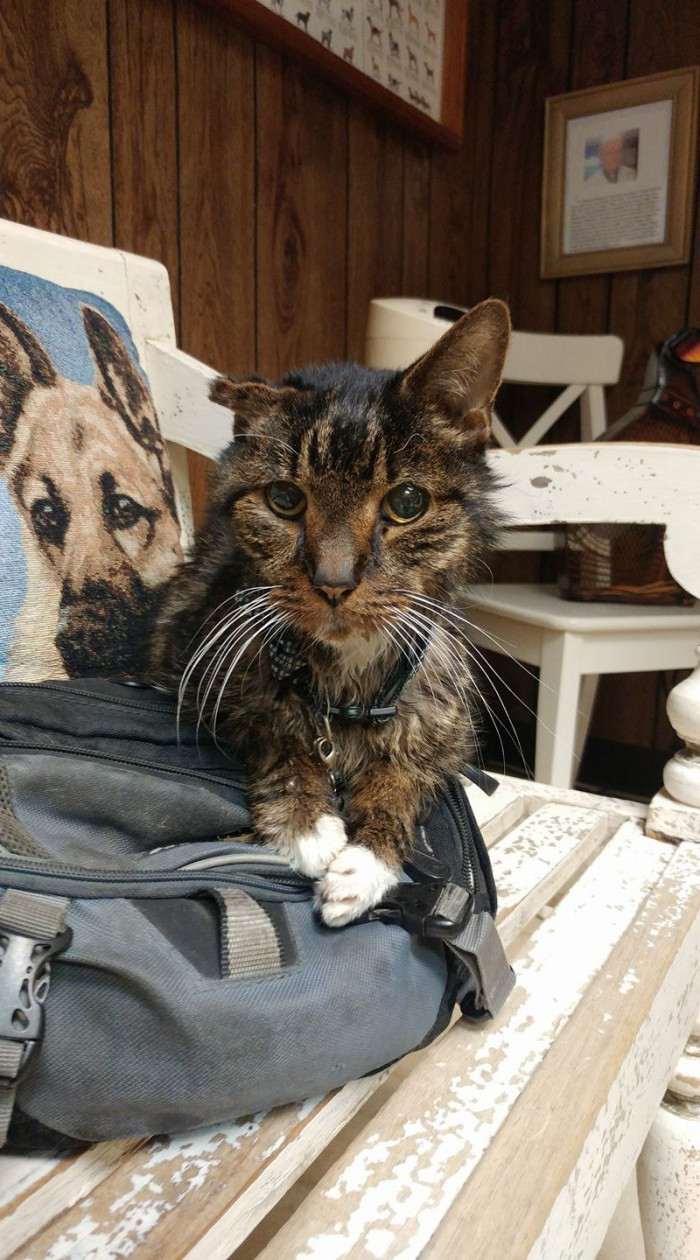