Gypsy isn't your average traveler - he's a four-legged furry feline who values his freedom and relies on the kindness of his neighbors in Pheonix, Arizona, who leave food and water out for him on his travels. Gypsy's coming and going, however, led to little worry when the feline disappeared over the weekend.

Gypsy got himself into a bit of trouble when he climbed an electricity pole and it turned out to be a lot harder to get back down than it was to climb up. The cat clung to the pole for three days, waiting for the right person to save him.

It was Monday morning when neighbors realized Gypsy's plight and reported the cat and his troubles. A local news outlet then arrived to cover the rescue effort, live-streaming it to Facebook. For an hour and a half, thousands of viewers watched Gypsy as he lay on top of the pole, licked himself, attempted to climb down, changed his mind and licked himself some more.

The Phoenix Fire Department received so many calls from worried passerby's that they released a low statement asking people to stop calling. One onlooker attempted to rescue the cat himself, coaxing Gypsy into a bucket, though the cat remained unconvinced and continued to lick himself some more while he waited for a more suitable rescuer.

Finally, a utility worker with a ladder scaled the live power pole, and Gypsy was safely on the ground.

Gypsy the cat got himself into quite the sticky situation. 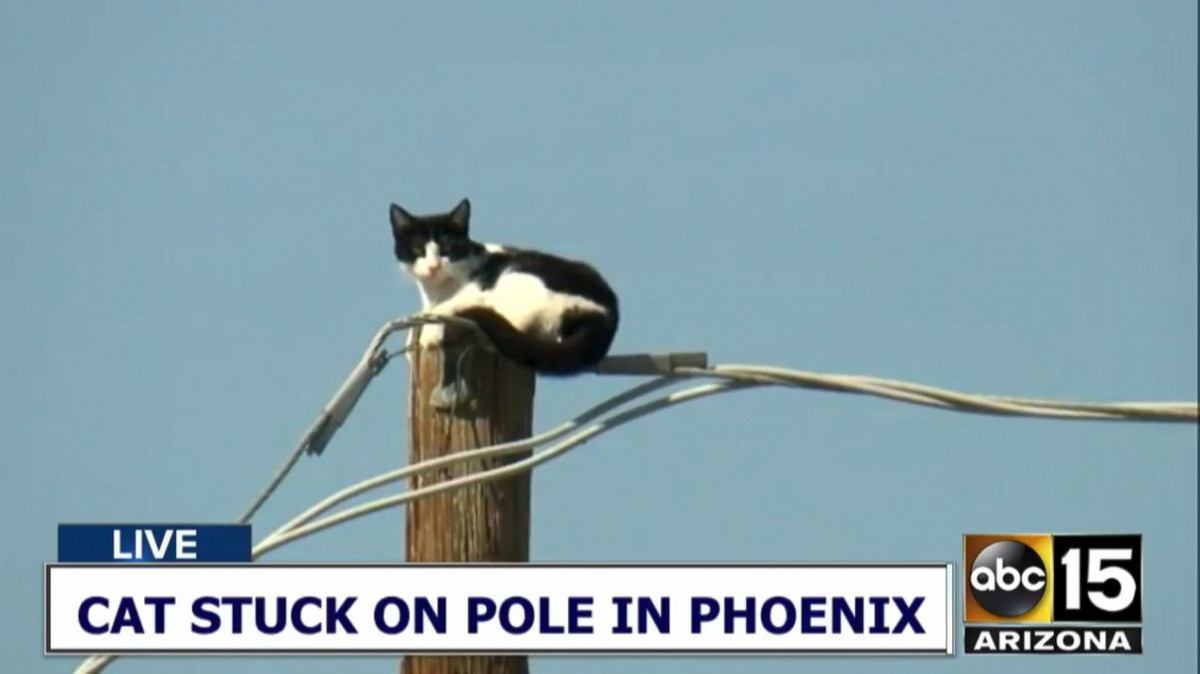 After getting himself stuck atop a power pole, it took three days for people to realise the cat was missing.

Unable to figure out how to climb back down, the cat clung there waiting for help.

Awww poor baby. How the hell did he get up there? ⚡️ “Cat rescued after being stuck on a pole for three days”https://t.co/PsbkYLzsa0 pic.twitter.com/wmbaMV7QQj

For an hour and a half, thousands of people watched Gypsy through a live stream, as he dealt with his plight.

The Phoenix Fire Department received so many calls that they released a statement on the Local News asking viewers to stop calling as their dispatcher was clogged.

Biggest story in AZ as of 10AM today: Cat stuck on pole. #abc15 #HappyMonday pic.twitter.com/WaYqWResHK

Eventually, a man with a ladder attempted a rescue, and took Gypsy securely under his arm before descending the ladder with care.

Though Gypsy had just experienced the trip of a lifetime, he was relieved to be back on the ground.

Cat rescued after being stuck on power pole for three days - https://t.co/wQpul7chbx pic.twitter.com/cVQtckuNnC

Gypsy's owners, Jenny Hardin and Ash Morgan, were extremely grateful that help had come in time before Gypsy decided to jump himself.