Cats are inquisitive creatures, but most cats are limited to just wandering around the apartment or, the lucky ones that live in houses, go to the backyard, or take a walk through the neighborhood…

But some incredibly lucky kitties get to go hiking, canoeing, and traveling with their owners.

Anneka, 21, works as a dog-walking company manager and a pasta maker, and Ryanne, 24, is a former Marine who now works at a pet shop and a dog daycare center. They are natural-born travelers and like to share their adventures with their cats, especially Moose, who is a bit of a daredevil.

They are now living together in Seattle, US, but they had a long-distance relationship for a year when Ryanne was stationed in Japan, and Anneka was going to school in DC. 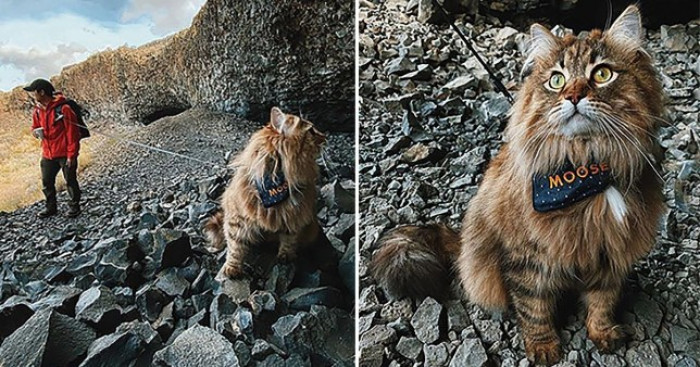 They say “We are Moose’s second owners; his first owner was a friend of mine who was no longer able to take care of him. As for Duckie, her adoption happened so quick! Moose at the time was recovering from an injury prior where he’d gone missing for 3 days, and was on bed rest for the next 6 weeks back in October. (The most stressful weekend of our lives). Moose would spend his days just idly staring out the window or laying on his side. My partner, Ryanne, looks on adoption sites daily for the fun of it, and brought a picture of a tiny little tortie kitten from PAWS’ online website to my attention.”

Duckie and I had a Pike Place adventure today! ✨ It was Duckie’s first time and I will say she did amazingly 💛 Meowmy and Daddy said they were shopping for Christmas gifts but they just got food for themselves 😹🥟 • • • • • #holidayseason #pikeplacemarket #adventurecats #adventurecat #seattlecats #seattlecat #siberian #siberiankitten #cute #cutecats #tortiecats #catsofinstagram #caturday #catstagram #travel #travelcats

“Seeing how we didn’t really have any plans that day, we decided to just take a look around the adoption center and met with Duckie for the first time! Her original name was Gingerbread Cookie, in lieu of her beautiful orange and black fur. We instantly fell in love and signed the adoption papers that same day we went to just “look”. We thought it would be a great idea to keep Moose busy on bed rest with a new sibling. It turned out to be the best idea we made for our little family.”

It looks like Moose was already predestined to be an adventure cat, and his previous owner was already taking him out on a lead, so he gave the gear to Ryanne and Anneka to resume his training. “At just ten weeks old, I put him in a small cat harness just for him to get used to,” says Anneka. “In the beginning, he slumped right over and didn’t move, but with him being a kitten still, he soon forgot about the harness when it came to play time.”

“We used our apartment complex halls to create a one way stretch for him to walk down and explore on his own. I then attached the leash and held it loosely, so it didn’t seem like there was any resistance against him walking. And the rest is history!”

He also joins his owners in a kayak and Anneka says he’s completely cool with observing the world from the water but slips down into the boat if he feels nervous or merely can’t be bothered.

Duckie is still getting used to adventure life, so Ryanne and Anneka have been helping her get comfortable with the great outdoors by carrying her in an “adventure bag” or on Ryanne’s back.

They say, though, “she’s definitely taken a liking to outdoors and enjoys watching her brother walk on the forest floors while she keeps dry on the bag.”

It may perhaps appear odd to many cat owners how Moose doesn’t run away on their hikes, but Ryanne and Anneka say that the cats never tried to leave their side.

Anneka says:” Our cats have never intentionally run away, aside from darting out the door to just eat some grass in our apartment complex. Moose did go missing for three days due to an injury he sustained while roaming the outdoors on his own. It’s known that cats, if injured, will scurry away to safety to rest until they feel they’re healed enough.”

“Moose was found by our neighbors walking down the street attempting to get back to our house. I immediately picked him up and pulled Ryanne from work to rush him to the hospital. We were both hysteric from searching every night in pitch-black darkness desperately trying to find him. He had a dislocated and fractured hip along with a laceration on his tail. Since then, Moose has made a full recovery and shows that not even an injury will stop him from the adventures that await him.”

The lengthiest trek Moose has done so far has been four hours, and he’s hiked everything from snowy mountains to deserts.

Anneka says, “Duckie, being new to adventuring, took some time before she used the outdoors as her litter box. Exploring the snow-covered grounds, Duckie took 20 minutes until finding the right spot to turn the snow from white to yellow!”