If you have ever had a cat then you know one truth: they're always hungry, whether they're hungry or not. Their perception of, "I've had enough food" is so very, very unrealistic. For domestic cats being kept and cared for by humans, it is extremely important for the humans to play an active roll in their cat's dietary health. Outdoor cats tend to need less kibble and soft cans of food because they're usually wreaking havoc on the local ecosystem, killing small rodents and birds for a substantial source of nutrition and usually helping keep pests away.

Yet we've seen time and time again that won't stop an expert beggar of a cat from begging their ways to delicious, easy treats any gullible human is willing to offer. Such is he case for a campus cat in California named Cheeto. Orange and chunky, Cheeto lives in the physics building at UC Davis College of Letters and Science. Recently, physics students who love Cheeto deerly noticed he was really packing on the weight and decided to seize their moment and help resolve Cheeto's weight conundrums by addressing their fellow students using amusing and educational posters.

Cheeto is quite beloved by the students in the Physics building, but he has a very strict feeding schedule and recently, his ability to beg has led to a problem of enormous magnitude... the enormous part being his belly. 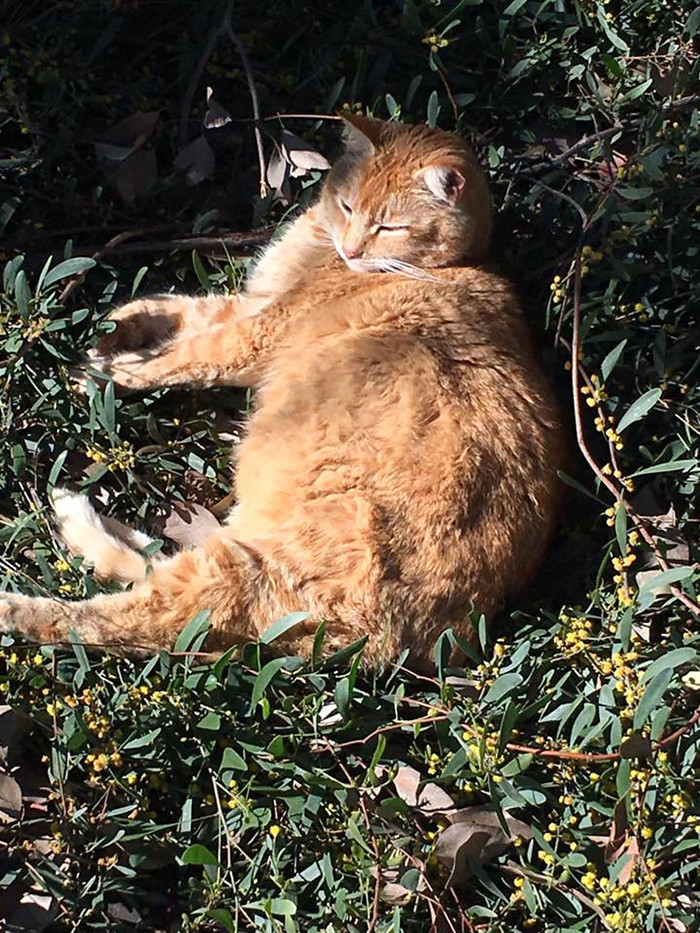 Clearly, Cheeto was being given snacks and treats left and right.

Students placed humorous and educational signs up to try and ward off the unhealthy habit Cheeto was delighting in:

Cheeto, the ginger cat who hangs out around the Physics building, is looking more and more like a cheese puff. Please don’t feed him. He’s overweight and squirrels eat the extra food 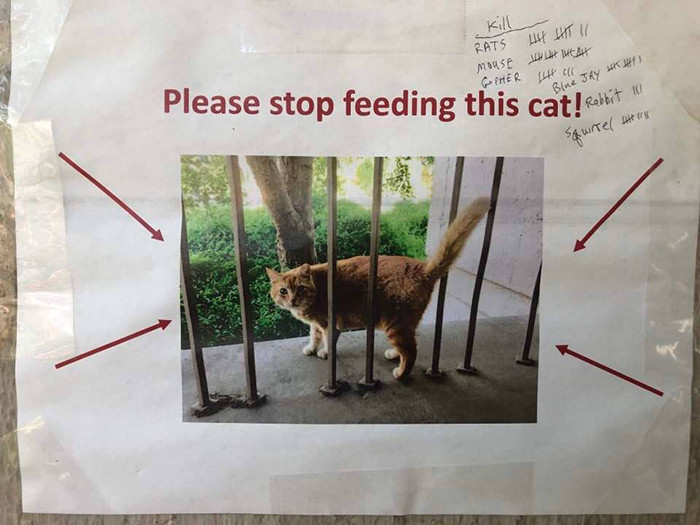 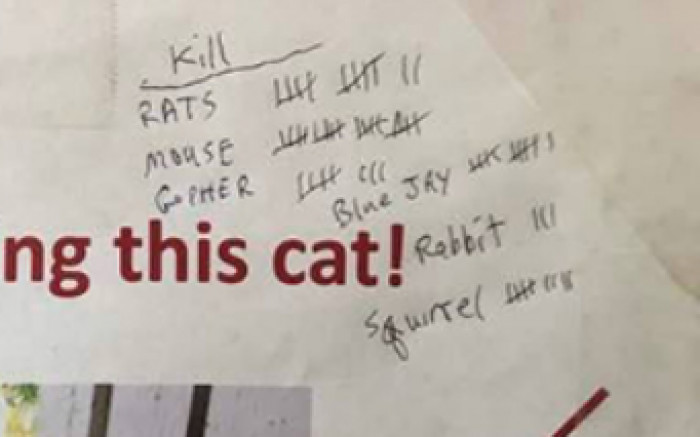 The students included a feline health chart, to help emphasize that Cheeto was not where he ought to be as far as his weight and health was concerned. And underneath, they added a sign:

His name is Cheeto and he has a DESIGNATED feeder from the physics department every morning! We quite like this cat as he provides valuable emotional support when Physics shatters our souls.

He has become far too overweight and for his health, please do not feed him – no matter how much he begs! And he will beg. Because he knows we are suckers!

Also, the squirrels like to eat the extra food, and they are getting heart disease (see Figure 1). 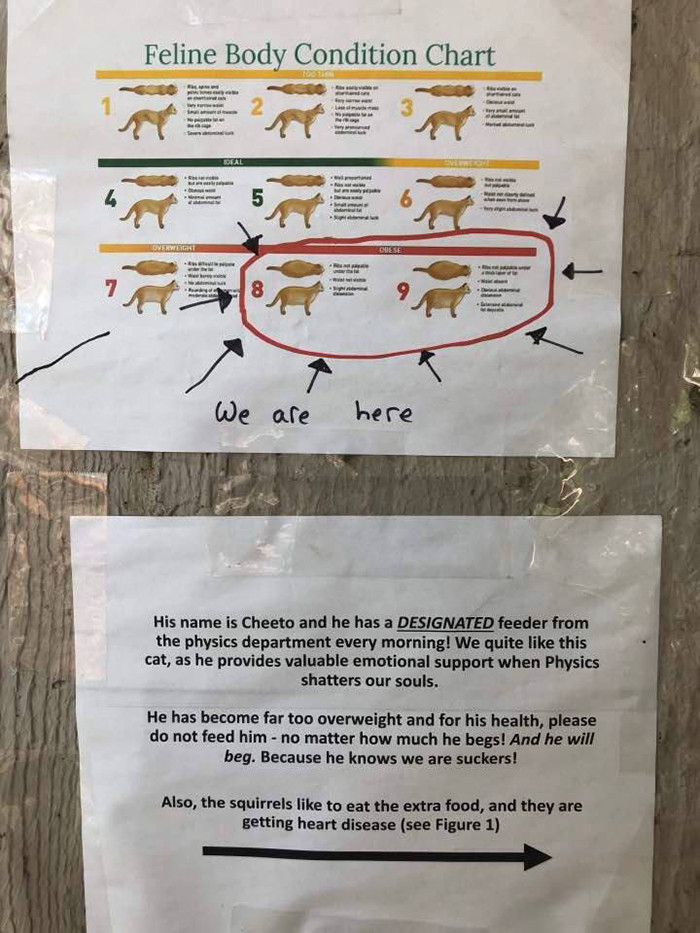 Not only did they include an infro-graphic on feline health and a note about why Cheeto's health had become problematic, they also included a graph they made correlating the heart health of the squirrels on campus with the leftover snacks Cheeto was receiving! 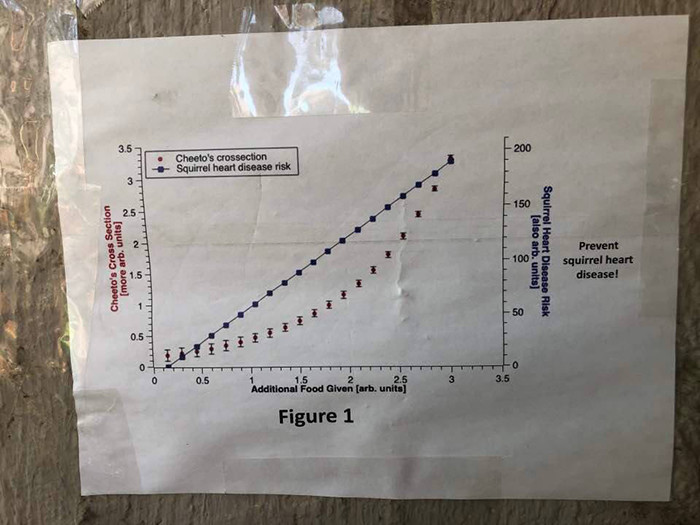 UC Davis shared the plea for Cheeto's health on their Facebook page.

Some offered weight-loss advice, while others saw a golden opportunity to crack paws-itively hilarious jokes.

And naturally, as things with cats tend to go, Cheeto went viral. 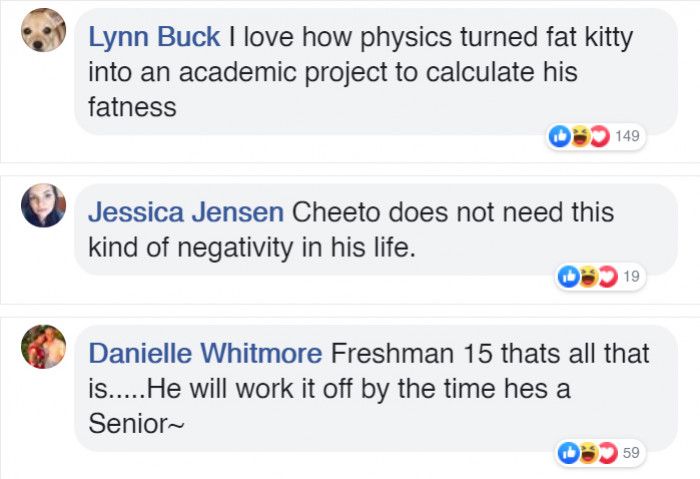 Never underestimate a cat's perception! Kathy gets it. 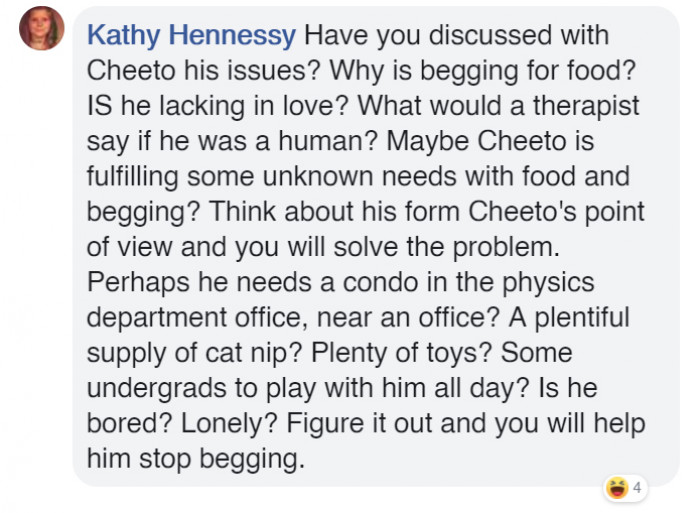