How many times have you heard someone declaring they don't want cats? I've heard at least a couple, but the story always ends the same way -- those who said they would never get a cat got themselves a feline... and now they're the best of best friends.

Some dads prefer dogs over cats. Others prefer having no pet at all. Many dads claim they are not cat people, but put a cute kitten in front of them and they will come around real fast. Maybe cats have their own way of making people fall in love with them. It could be the adorable, cute eyes? Or the tiny paws? Or the charming purr?

I'm not quite sure... but here's one thing I do know: these 19 dads were cat haters, but ended up totally head-over-hills with their cat best friend!

1. This dad who makes sure his cat sees everything he bought

my dad who “didn’t want a cat” showing Lucas every item of the weekly shop because “he wants to see what we’ve got” pic.twitter.com/Uka5eccZZm

2. This dad who said he doesn't want a cat in the house

3. This dad who can't be separated with his cat best friend

my dad: I don't want a cat in the house
also my dad: pic.twitter.com/tw8NQOdpgr

4. This dad who is overprotecting his cat

2) making them a sandpit and a paddling pool

(he walks them on harnesses because we live near a big road and he’s scared they’ll get run over) pic.twitter.com/TlpJTZOD8b

5. This dad who grabs every photo opportunity with his cat

dad: do not bring another cat into this house

also dad: “take a pic of us” pic.twitter.com/kkqmfeMg6H

6. This dad having the best sleep while cuddling his cat 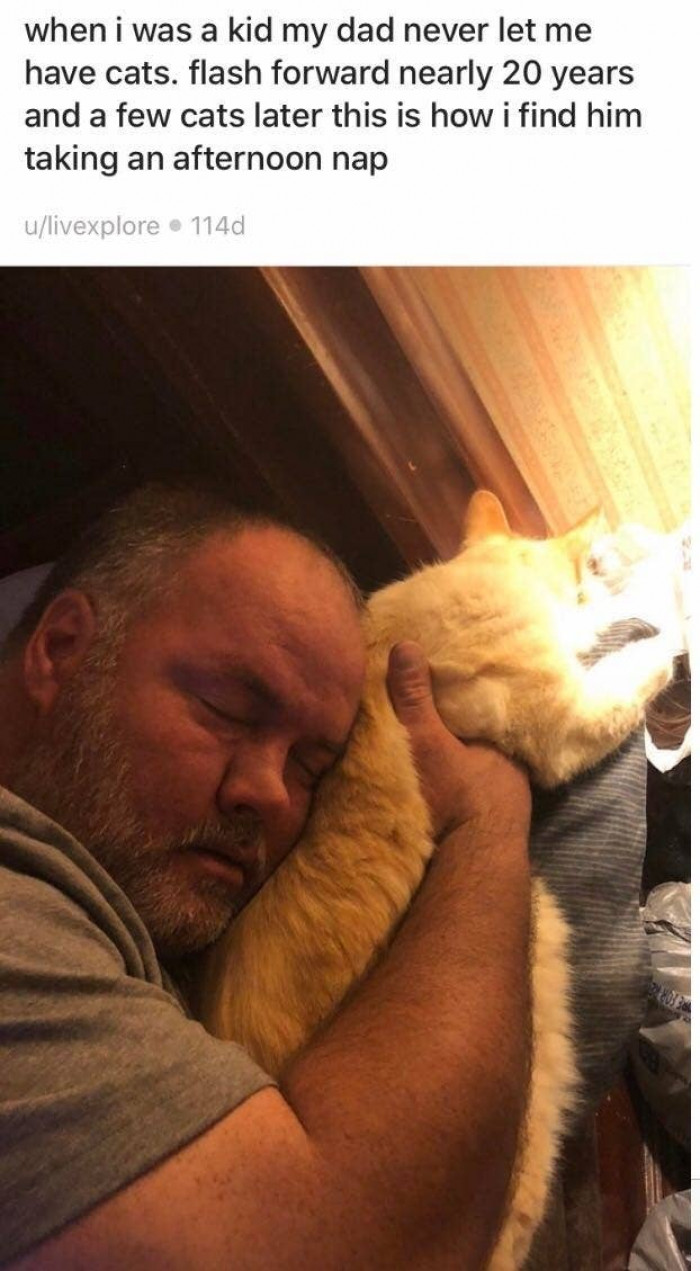 7. This dad who probably is still in that same position

Dad : NO CATS ARE ALLOWED IN MY HOUSE!

8. This dad who loves tucking in his cat

my dad: don’t u dare bring a cat into this house
also my dad: pic.twitter.com/swNqkacfRh

9. This dad who loves watching the game with his best friend 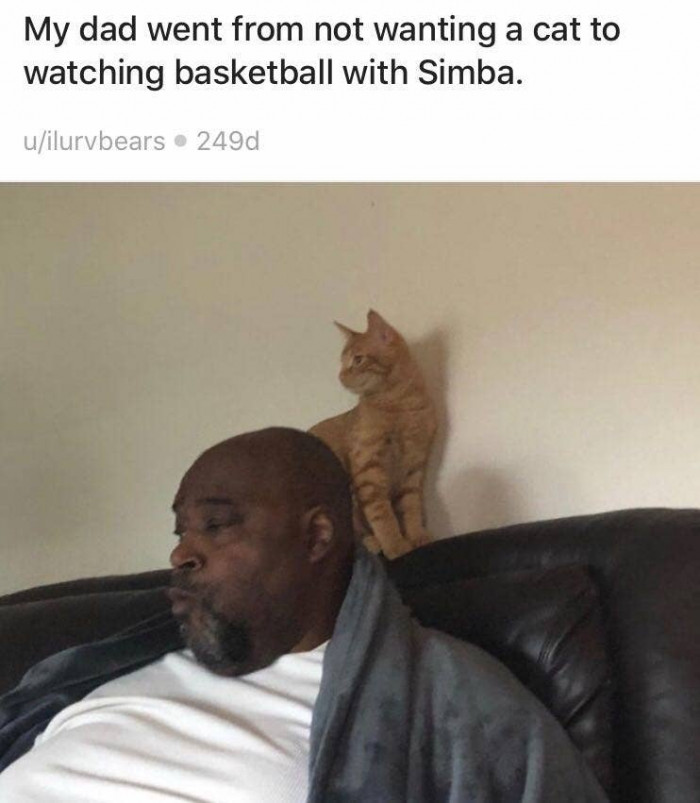 10. This dad who is definitely glad his kid didn't take the cat back

*gets cat from the pound*

dad: “take her back, we don’t need another cat. she’ll make a mess around the house.”

11. This dad who loves sharing his snack

12. This dad giving his cat a little smooch

My dad: If you people ever get a cat, either I will live in this house or this cat will.

My dad, 5 years later after having a cat: pic.twitter.com/m2kBPRXM1P

13. This dad who's hanging out with his cat on the floor

14. This dad feeding and filming his pet

Dad: “we don’t need a cat. I hate cats”
Dad after we get a cat: pic.twitter.com/WBMGcPhKDB

16. This dad loves napping as much as his cat does

my dad: NO we can not get a cat i hate cats.
also my dad with the cat: pic.twitter.com/VpWpObflLz

17. This dad who sings and teaches his cat to dance

My dad : NO CATS IN THE HOUSE!

18. This dad who's committed to giving his cat the best view

my dad, 2 months ago: we are never getting a cat. no cat of yours will live in this house

my dad, now: i spent two weeks building this custom shelf so gizmo can sit by his favorite window because the one you bought from amazon isn’t good enough pic.twitter.com/LnUhf0eh0E

19. And lastly, this dad who couldn't *and wouldn't* look away