The world watches on in a mix of horror and sort of understanding as Australia launches it's firm but deadly plan to eliminate a feral cat problem that has reached historically devastating proportions for the indigenous species of the continent. In 2015, Australia's national government decided they had to address the problem head-on and established a plan to kill 2 million feral cats by 2020.

With a plan to use planes to dropped specially designed poisoned sausages over an area of Australia said to be home to somewhere between 2 and 6 million feral cats, so many people have asked, "why?" Well, cats are not indigenous to Australia. They were brought over by European settlers long ago but since then it is estimated that they have been directly responsible for the extinction of around 20 indigenous Australian species.

In an interview with Sydney Morning Herald, Gregory Andrews the national commissioner of threatened species said:

We have got to make choices to save animals that we love, and who define us as a nation like the bilby, the warru (Black-footed rock-wallaby) and the night parrot.

Additionally, he insinuated that feral cats are the 'single biggest threat' to Australia's indigenous species. 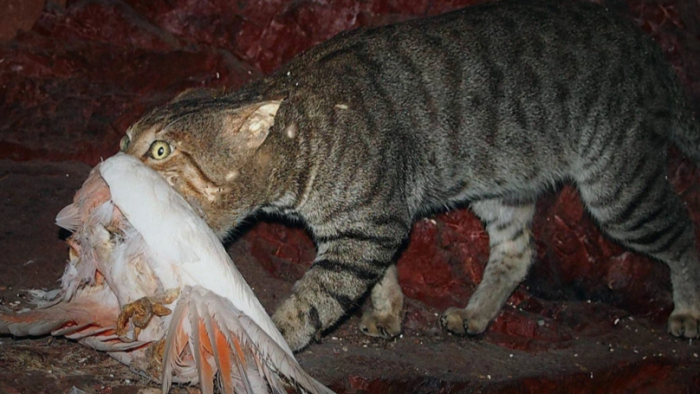 Dr. Dave Algar, the principal research scientist in the Department of Biodiversity Conservation and Attractions for the state of Western Australia, is sometimes referred to as "Dr. Death." He is the scientist responsible for creating the recipe of sausage that is being used to kill off the feral cat population, a job he's taken very seriously. According to the New York Times, "he began developing the recipe for the poisoned sausages by examining cat food in supermarkets and observing which flavors most thrilled his own two cats."

They’ve got to taste good. They are the cat’s last meal. 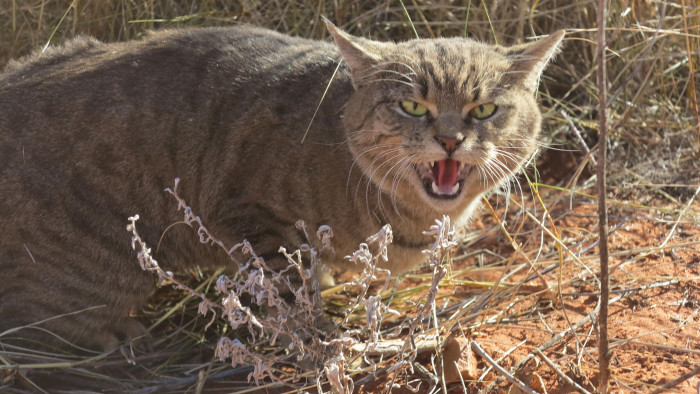 "Dr. Death's" recipe is composed of kangaroo meat, chicken fat and a mix of herbs and spices, along with a poison called 1080, "derived from gastrolobium plants and highly lethal to animals, like cats, whose evolutionary paths did not require them to develop a tolerance to it." Dr Agler suggests they would also be poisonous to other non-indigenous species like foxes. The plan is for the poisoned sausages to be dropped from planes at intervals of 50 kilometres.

Reportedly, it will only take 15 minutes after ingestion for the sausages to kill a cat. A recent study found that feral cats kill around 377 million birds and 649 million reptiles across Australia each year, and according to The Royal Melbourne Institute of Technology, around 211,560 cats were killed in the first 12 months after the plan was announced. As to be expected from a world reasonably enthralled by our furry, feline friends, them measures have been met with resistance from the moment they were announced, despite the continued threat to endangered species.

When the plan was first announced, half a dozen petitions collectively gained than 160,000 signatures. Other countries dealing with invasive cat issues have taken less extreme measures, like the island in New Zealand that banned cats but hasn't been dropping poisoned sausages from the sky.

Additionally, some people believe the Australian government is being disingenuous and using the feral cat situation as a smokescreen or distraction from larger issues they refuse to deal with. Tim Doherty, a conservation ecologist from Deakin University in Australia told CNN, "that feral cats take a "big toll" on Australia's native species, but believes the cull is based on shaky science."

Eluding to the implication that the government is distracting from larger environmental issues like mining, logging, and urban expansion, Doherty says:

There's a possibility there that cats are being used as a distraction to some extent. We also need to have a more holistic approach and address all threats to biodiversity. But Gregory Andrews bites back at critics, saying to CNN:

We are not culling cats for the sake of it, we are not doing so because we hate cats.

We have got to make choices to save animals that we love, and who define us as a nation.

Today, an estimated 80% of Australia's mammals and 45% of its birds are found in the wild nowhere else on earth.