While Australia is killing off millions of feral cats and New Zealand has an island completely banning cats from even being pets, The UK is going on a very, very different direction when it comes to a wild cat population: they're trying to increase numbers drastically! Although Australia and New Zealand are having domestic cat breed problems disrupting their Eco-systems and threatening thousands of their nations' species, The UK is focusing on actual wildcats, a breed of "untameable" beast much more comparable to big cats like leopards!

Naturally, this peaks our curiosity! For the last 150 years, wildcats have been a very rare sight throughout England and Whales, popping up only occasionally in Scotland, all courtesy of extensive culling by gamekeepers.

Wildcats have not been recorded in the south of England since the 16th century... 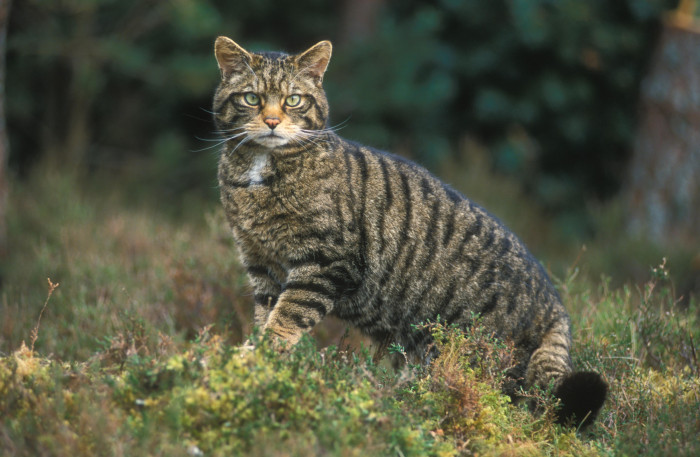 Wildcats are no joke, either. They have a "renowned ferocity." So much so that one 15th-century hunting author was specific to note about them: "If any beast has the devil’s strength in him, it is the wildcat." 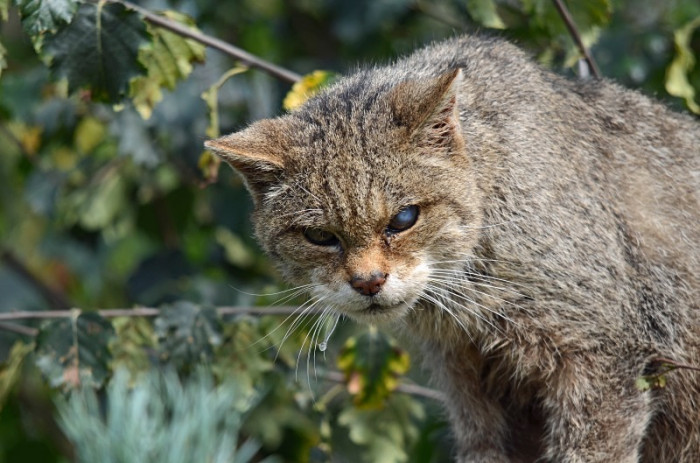 Experts say the occasional farmer may lose a chicken or two with the reintroduction, but that wildcats would be much less invasive than foxes and focus more on pests that need to be dealt with than they would be bothering innocent chickens on local farms. 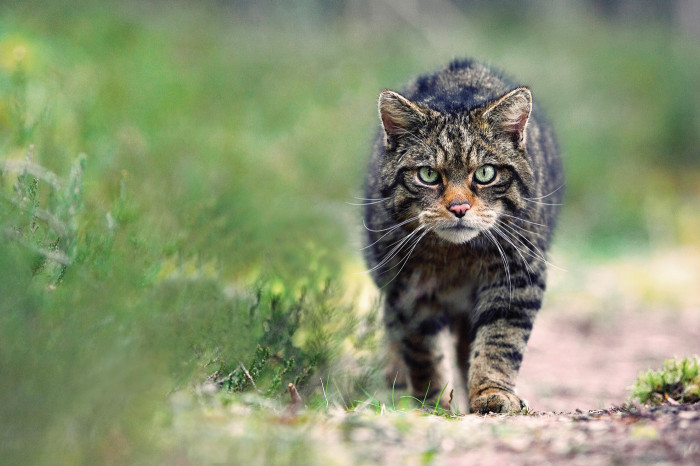 A feasibility study by the Vincent Wildlife Trust has suggested that the best suited habitats to reintroduce the wildcats in the UK would be: Cornwall, Devon, and mid-Wales. So those are the areas conservationists are targeting. 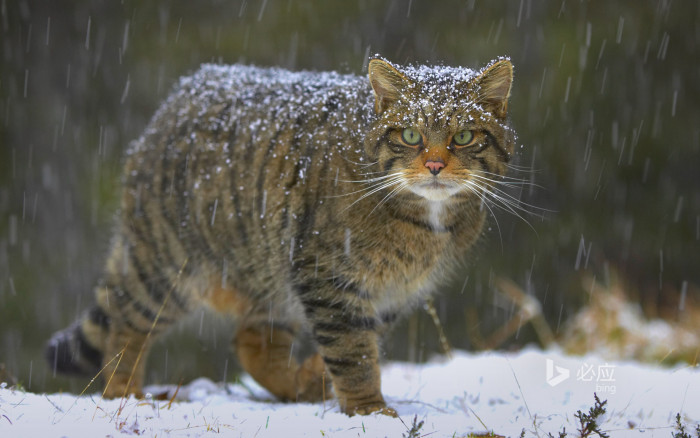 While there is a common misconception that felines prefer to live among dense forest, it's more accurate to note that they prefer to live across well-hedged farmland instead.

Due to the extensive damage of mass culling regarding wildcats, the the International Union for Conservation of Nature reports a mere 30-member population remaining in Scotland. Ecologist Derek Gow, who has successfully reintroduced beavers and water voles in the UK, told the Guardian:

There’s nothing left of the Scottish population. 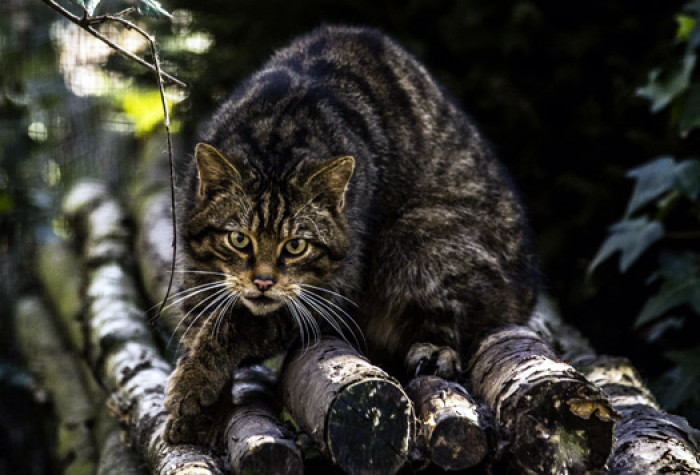 So, Derek Gow set up a breeding facility in Devon, one of the target areas.

In Scotland, the mass-culling led Wildcats to breed with feral domestic cats, causing a "hybridization," and while Gow says it's, "been a good effort," he doesn't think it's enough.

...This is the last-chance saloon and we need to do things completely differently and have a big viable captive breeding population. We need to start doing this kind of restoration right now and on a much grander scale than we’ve ever contemplated before. 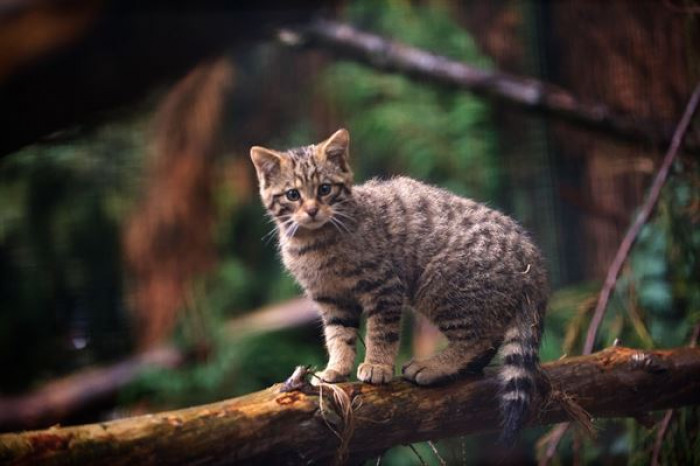 The process will be surprisingly simple, though. First, wildcats will be bred in captivity as part of an effort to sustain a long-term release operation. In fact, they are already being bred by the Royal Zoological Society of Scotland! Gow says:

We need to bring animals from Swiss and German zoos, build up a stock and have captive cats that are capable of producing 150 kittens a year. 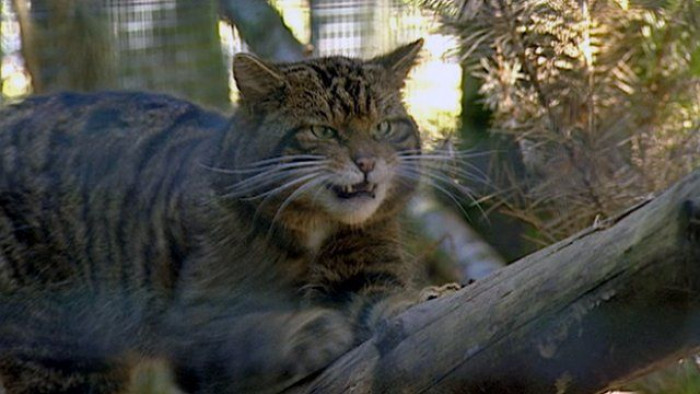 Ms Hartmann's success has been well-documented. In Germany, she had initially supplied 100 captive-bread wildcats to support their reintroduction program. The end result put around 700 of the wild frisky felines back into the wild! Additionally, the project led by Hartmann has seen the booming cat population successfully expand across into the Czech Republic. 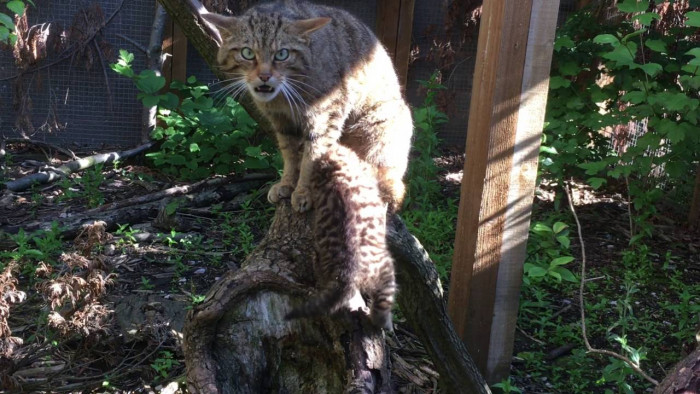 According to Hartmann, wildcats are easily stressed animals so she has a lot of advice for prospective breeders hoping to resolve their conflict. She suggests talking softly to the cats and offering more dens in enclosures for the cats to hide, and thus feel safe.

Most captive wildcats only birth one or two kittens at a time but Hartmann's methods have been much more successful... her cats are producing an average of four kittens per litter! It definitely sounds like she is the right person to take advice from. 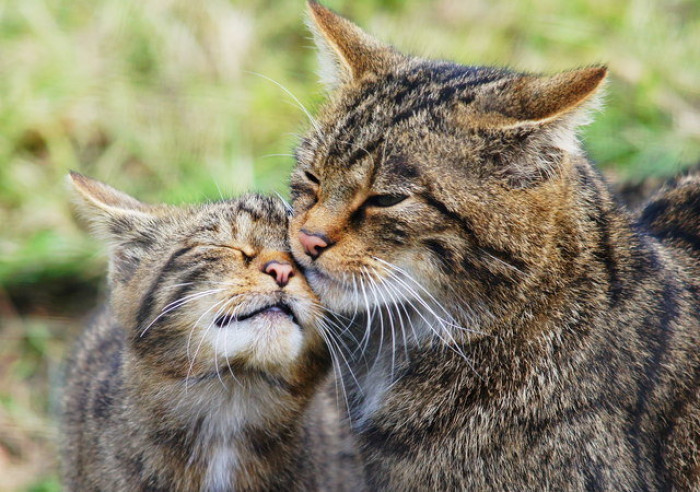 Hartmann's next step is to help train the kittens to hunt. She does this utilizing an automated feeder that releases dead mice on elastic cords. The kittens learn to time their pounce on the bouncing prey which helps the cats hone their "killer instincts," as well as practice the "death-inducing bite" they inflict on their preys' necks.

With those skills primed and ready, the cats are set up for long-term success. However, that doesn't mean there aren't obstacles to overcome when it concerns reintroducing wildcats into the wild. 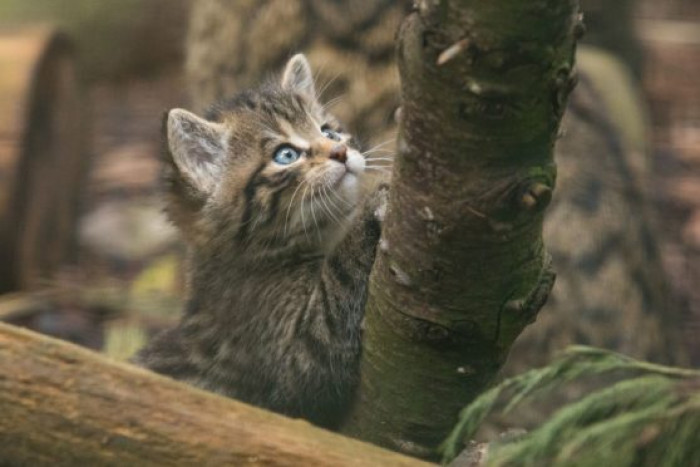 The primary obstacle that definitely requires prevention is making sure the reintroduced wildcats don't breed with the feral cat population. The hybridization needs to stop. To prevent this, conservationists actually need to remove large numbers of the feral cat population from the target areas before they can reintroduce the captive-bred wildcats. 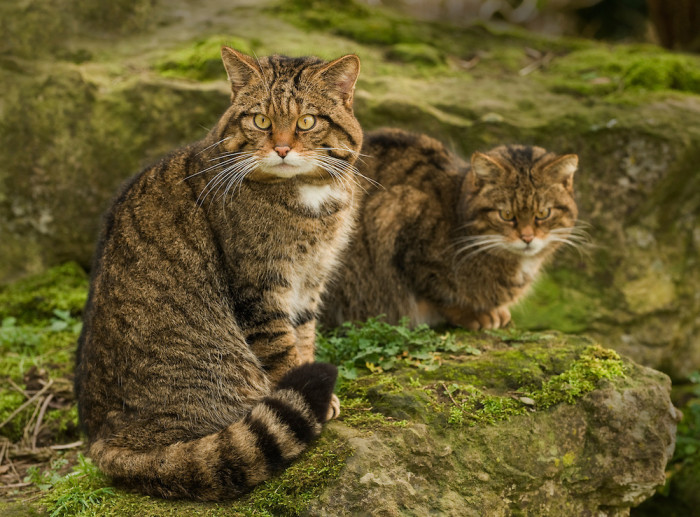 However, Hartmann isn't all that concerned about the feral-cat-hybridization issue. She actually says it's over-stated! Rather, Hartmann insists, "male wildcats mostly kill any domestic cats they encounter, rather than mating with them, unless they are unable to find a female wildcat to partner with during mating season." 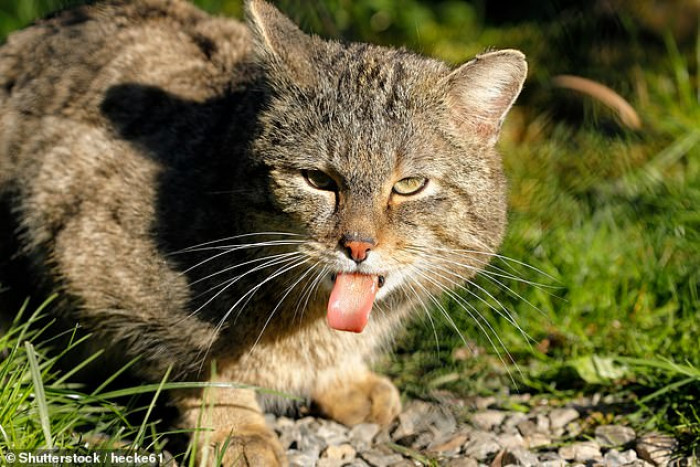 Wildcats are larger than domestic cats, but that's not all that sets the breeds apart. European wildcats are actually native to the continent and descended from the "relatively tamer" subspecies of African wildcat. Hartmann says:

Wildcats look like the kitty at home but they are like leopards. I’ve been working with leopards for many years and the only difference is size, and that leopards can get tame. If you hand-raise lions or tigers, they remain tame for the rest of their lives. Wildcats cannot be tamed under any circumstances. This is very special. 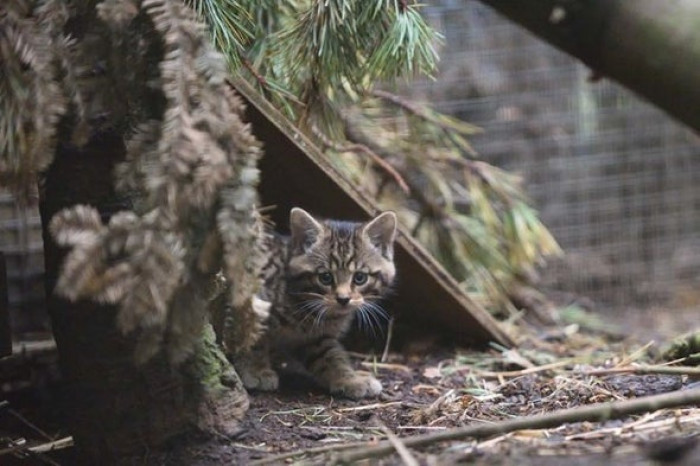 The UK Department for Environment, Food and Rural Affairs (Defra) has created a set of guidelines for "best practices" regarding the release of captive-bred wildcats but a license will not be required to release them, specifically because the animals can still be found in Scotland, despite the small numbers. A Defra spokesperson says:

The movement and release of any species in England, including wildcat, should follow the International Union for Conservation of Nature guidelines. These guidelines ensure there are clear environmental and socioeconomic benefits to gain from releasing the animals, and that their welfare is maintained.

Hartmann also is quick to reassure those who are concerned about the threat to farm animals, saying the only threat is perhaps a minor one to free-range chickens, but that the threat is actually less than that of one presented by foxes and more importantly the wildcats preference for hunting pests like rabbits and rodents could be beneficial for farmers! 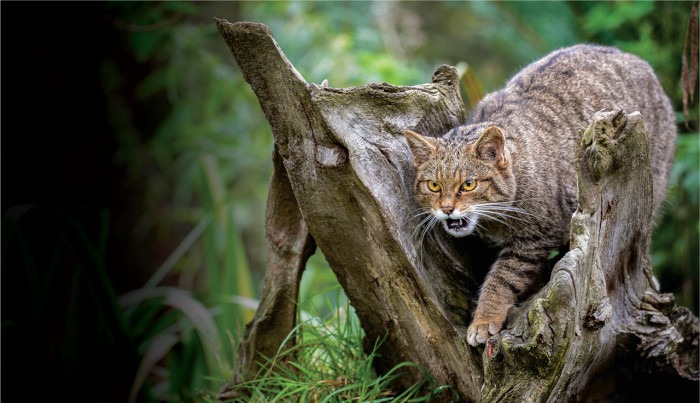 Hartmann also reflects that the hurdles to reintroducing wildcats have very little to do with the animals themselves, in fact, its mostly politics with a small side of conservation. She says:

The most promising programme is in England and Wales. The wildcat was there historically, there is habitat left and the most challenging thing is the feral cats. If you manage to control that, it can be a big success... But a reintroduction is a lifetime’s work. It’s 20 to 30 years. It’s not just releasing animals. 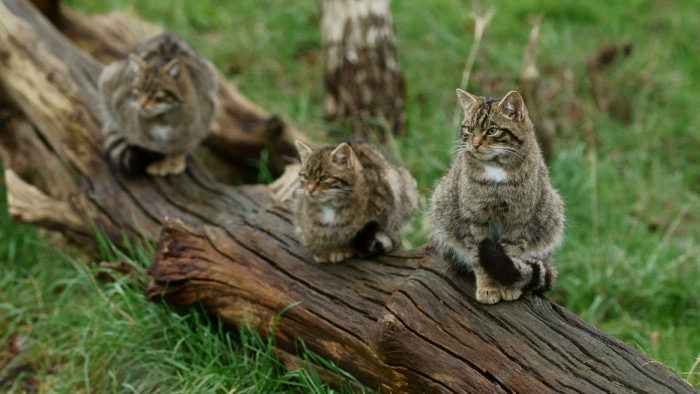 It does also seem that a lot of vocal opposition comes from the citizens who doubt the necessity or success of the project, so only time will tell. 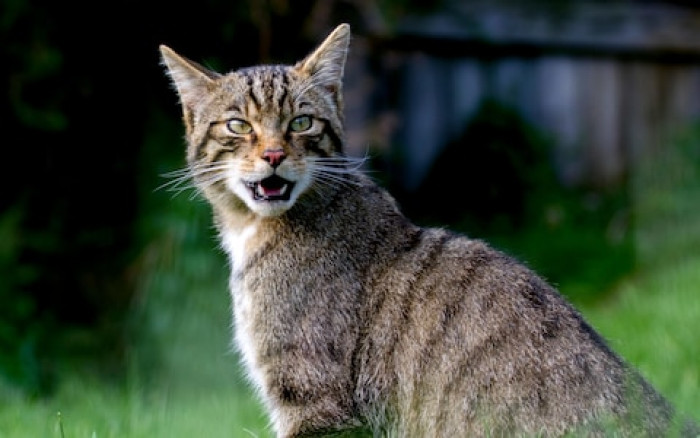