The main stereotype about cats is that they are standoffish, sometimes distant, and value their independence more than anything. Like most stereotypes, it's not exactly right – some cats won't leave their humans alone for a minute.

\Of course, it's not just due to their nature, but also the conditions they were living in, and that is often the case with rescue cats. After being adopted, they often turn out to be pretty clingy, seeking love and attention they were missing until then.

This is precisely the case with Ziggy. Whatever attention she was getting from her owners, Rebecca May and her husband Alex apparently wasn't enough, so Alex came up with an interesting idea – create a fake lap for her to lie down on when they can't be with her.

Londoners Rebecca and Alex May adopted a cat Ziggy 3 years ago. She was seven years old at the time. 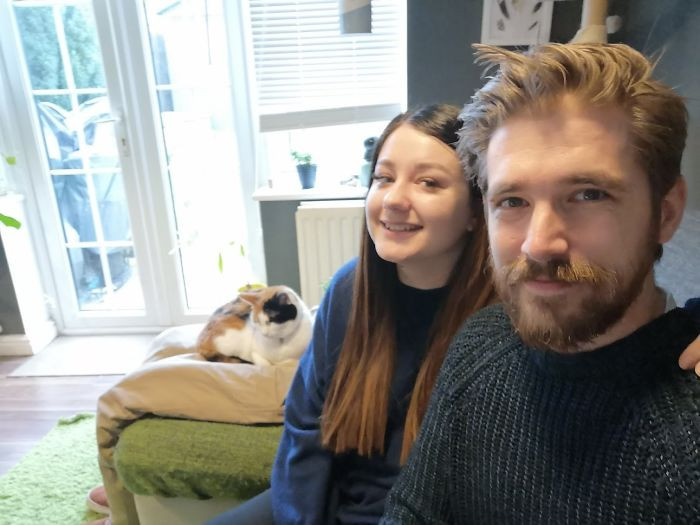 When they brought Ziggy back home from a local shelter, she seemed really shy, and she needed a lot of time to get used to her new family and the new surroundings. But as soon as she loosened up a bit, they couldn’t get away from her anymore because she transformed into a true lap cat.

Although Ziggy is very loving and cuddly, she’s also shy and it took her a long time to settle into their home 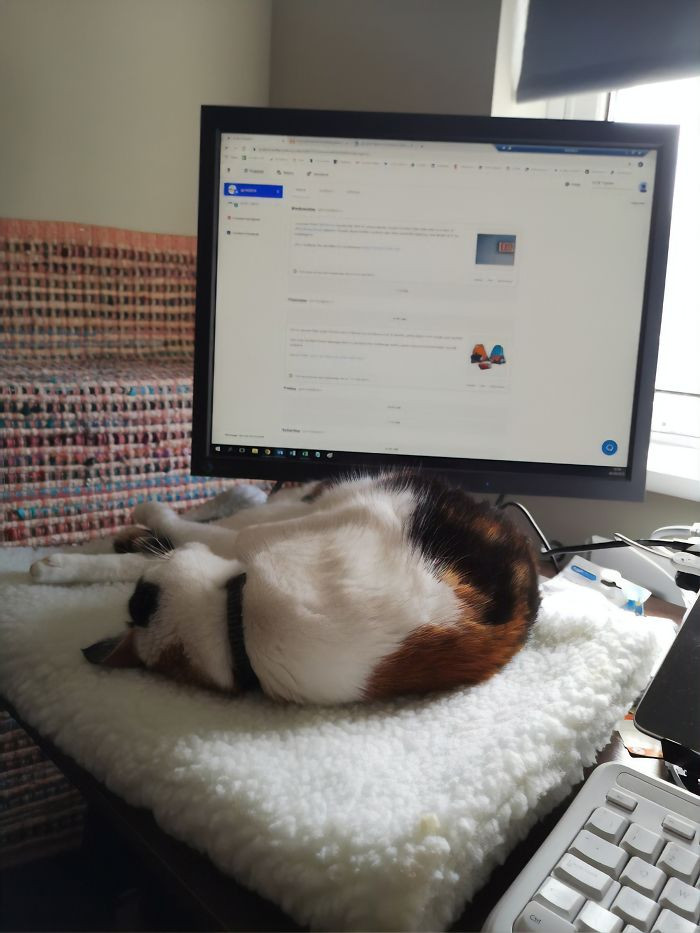 After living with Rebecca and Alex for three years, she now has full faith in them, and she became really demanding! “She’s almost on you before you’ve even sat down – she’ll see that you’re near the sofa and her eyes go black, her ears go flat like you’re a target. Once you’re down, she’s there.”

To the couple’s surprise, she transformed into a real lap cat once she finally became relaxed. 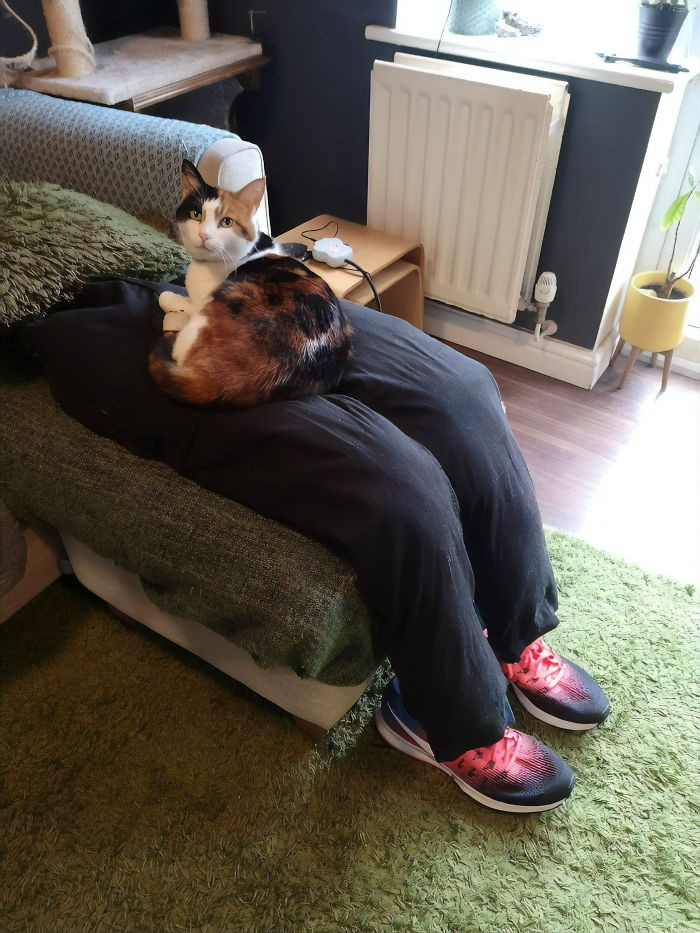 “Even if you’re not sitting, she’ll find some way to be on you, whether it’s your back or your shoulder! When we’re both sat at our desks, she will sit behind you and yell until she has your attention. She becomes very vocal, but her meow is like a kitten’s. It’s so hard to ignore her, and she’ll yell and huff at the door if you shut her out, she gets very stressed.”

“It took her a long time to warm to us and I think that’s part of why she’s so intense,” Rebecca told us 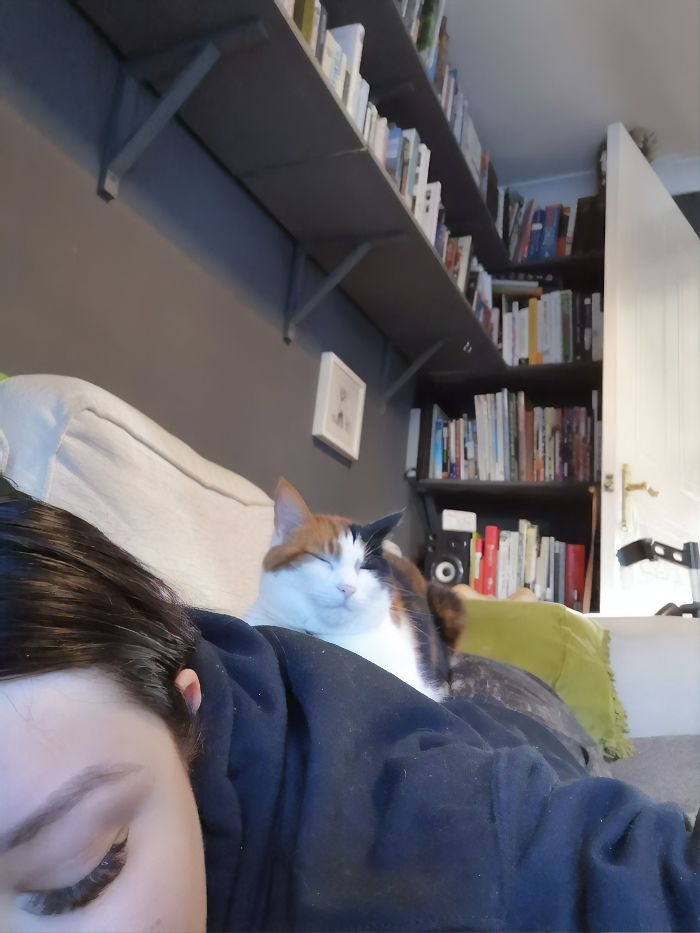 To satisfy her needs to always sit on someone’s lap, Alex built a phony lap for her. “I think my husband Alex built the lap mostly as a joke to make me laugh!” Rebecca said.

She’s eager to be on your lap and will remain there for hours, just purring and purring…. 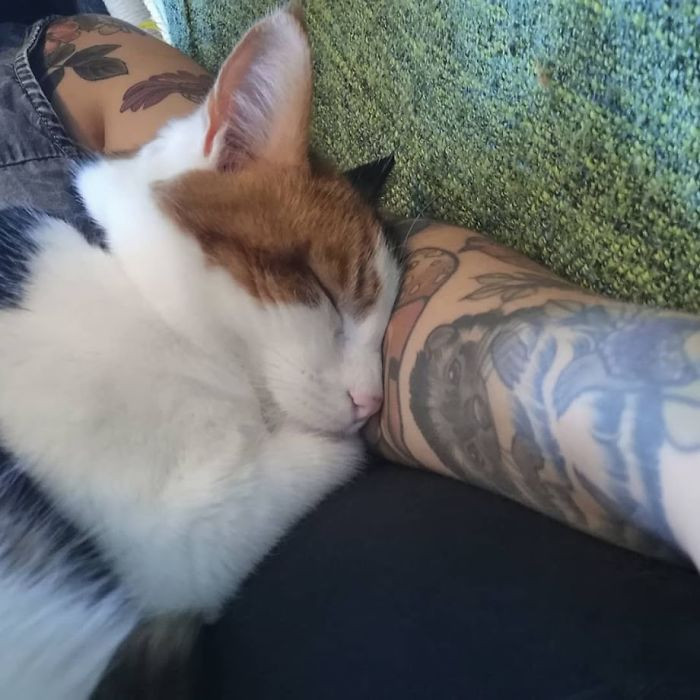 “We both work from home and had a day of phone calls and she gets quite vocal if we’re on the phone, but we can’t shut her out, so it was an ideal day for him to try it – but I don’t think he expected it to work. He took an old pair of trousers and stuffed them with a duvet cover, a towel, and a heating mat and she was on it straight away. The shoes weren’t strictly necessary…”

“Even if you’re not sitting, she’ll find some way to be on you, whether it’s your back or your shoulder!” 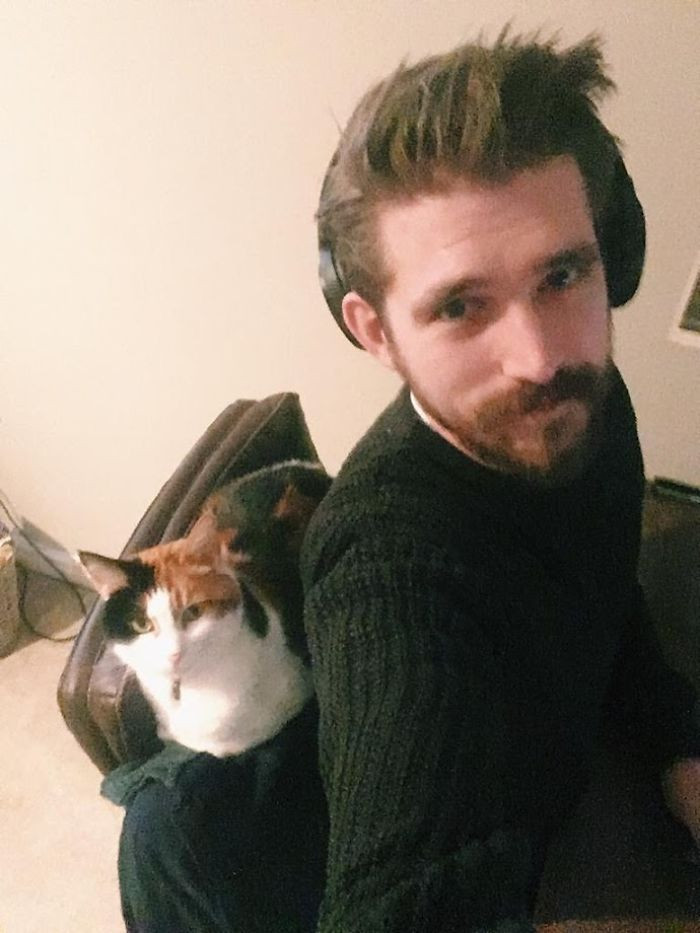 Although Ziggy was not a big fan of the heating pad in the past, she definitely loved it when it was a part of her phony lap. “I don’t think she’s fooled by it, but I think it must feel familiar to her. She stayed there for hours. That’s the longest she’s been away from us!”

“When we’re both sat at our desks, she will sit behind you and yell until she has your attention” 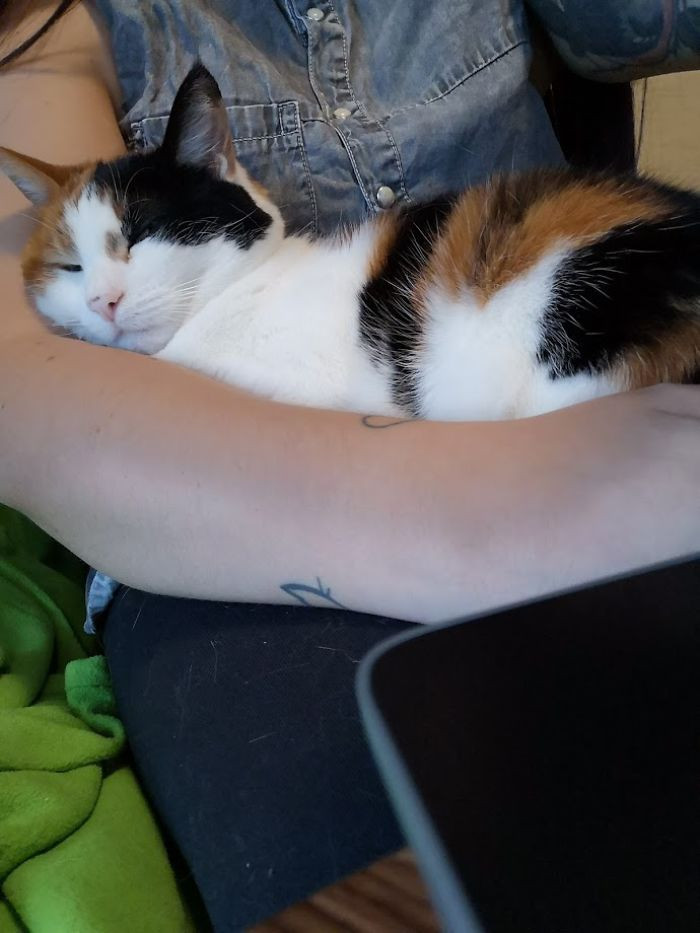 “We’ve only tried it a few times as we’re usually happy to entertain her, but there’s the odd occasion where we can’t and these come in handy. But they’re a bit too creepy to keep up all the time, so it’s currently on an as-and-when basis!” 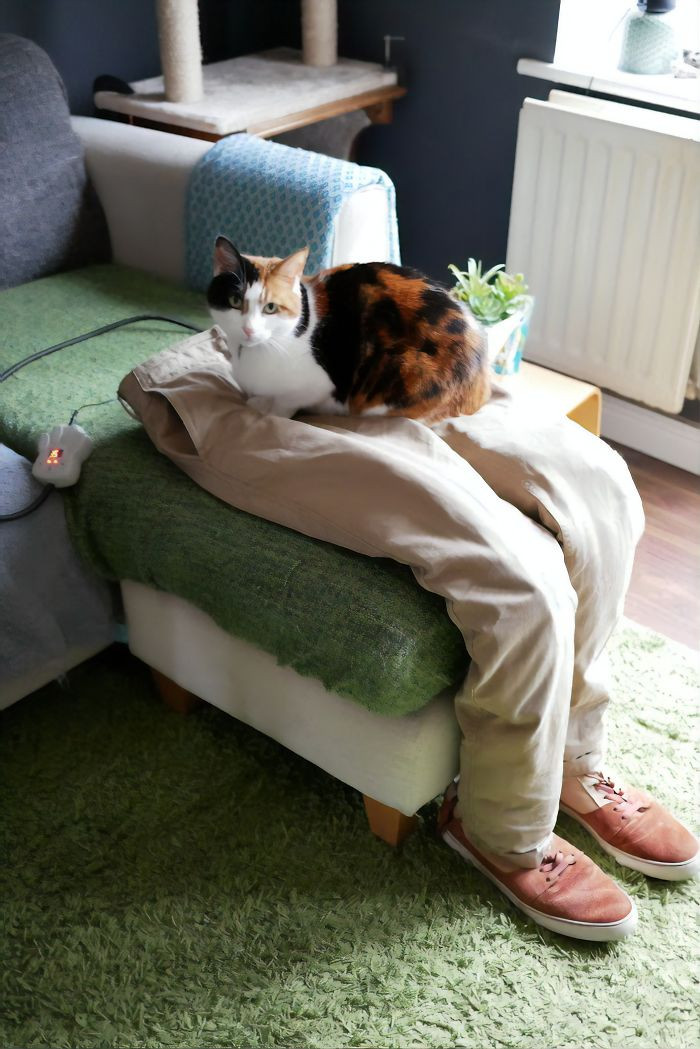 An old pair of trousers stuffed with a duvet cover, a towel, and a heating mat was all it took to satisfy their cat’s need. 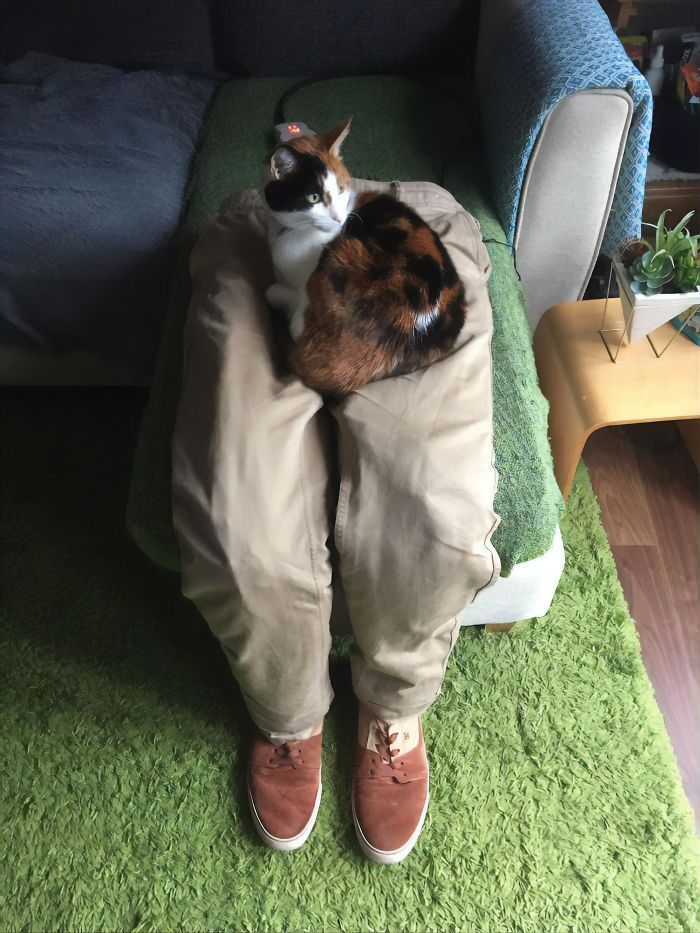 Although it was mainly built as a joke to make Rebecca laugh, Ziggy loved it so much, so Alex assembles it from time to time for her to doze on when they’re not home. 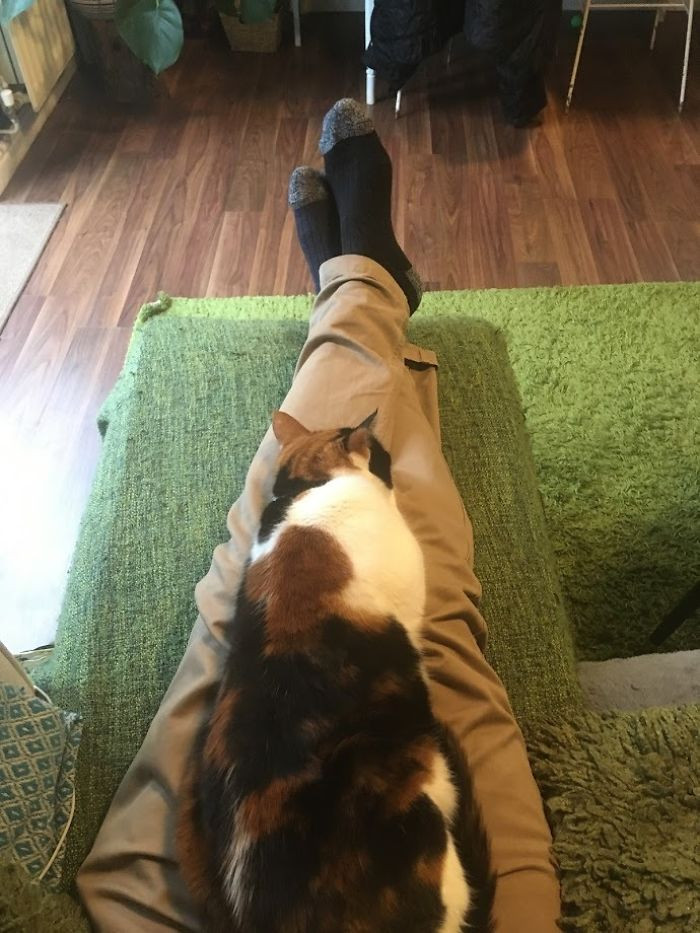