After Tragic Loss Of His Son, Man Opens Cat Sanctuary For 300 Cats

Long Island, New York, USA: home to over 7.5 million humans and as of 2018, 40 feral cat colonies with hundreds upon hundreds of stray and feral cats. Last year a review published in “Frontiers in Ecology and the Environment” estimated that cats account for up to four billion bird deaths and 6.3-22.3 billion mammal deaths a year in the United States, and have contributed to the extinction of 63 vertebrates.

But the solution to feral cats, stray cats, and cats in need is not simple and there is a lot of room for love and care. One grieving dad found himself unexpectedly rising to the call in his home of Long Island. Chris Arsenault always loved cats, but after the tragic and unexpected death of his 24-year old son due to a motorcycle accident, he found comfort and healing in caring for cats and it quickly transformed into something absolutely incredible.

After the tragic loss of his son, Eric, Chris quite literally stumbled on upon a colony of 30 sick cats and kittens. The small colony were living outdoors near his neighborhood. 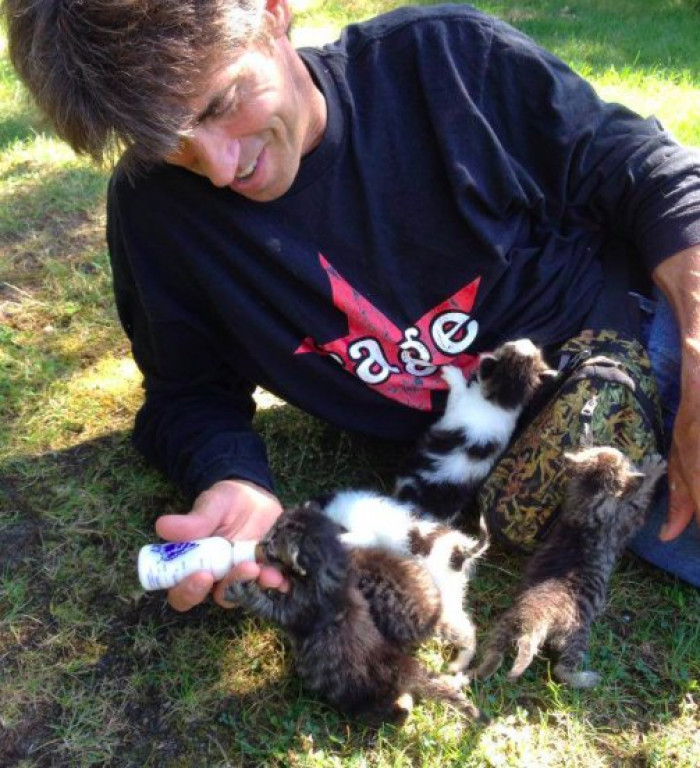 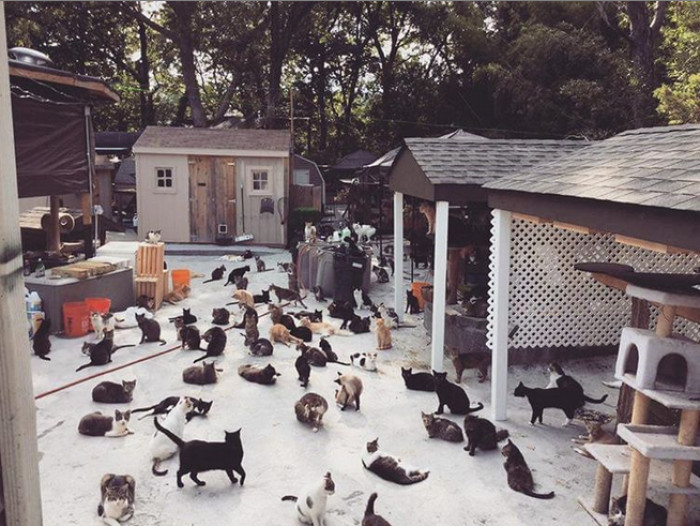 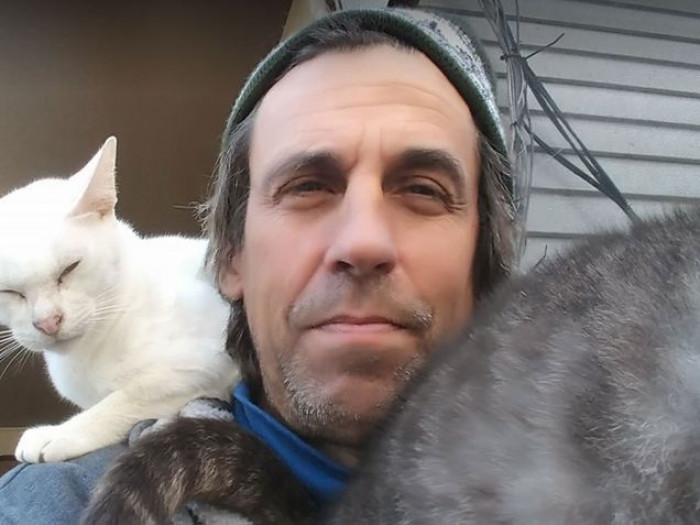 The now massive sanctuary includes a main shelter, a big, open yard with specialty-built fences that are designed tokeep the cats from climbing out. In addition, there are tons of cat lounges with heaters, air conditioners, and fountains!

In an interview with The Dodo, Chris said the cat count is up to 300, but it's not overcrowded:

It’s so big that even if a cat isn’t that fond of others’ company, he can claim whichever area he likes as his own. 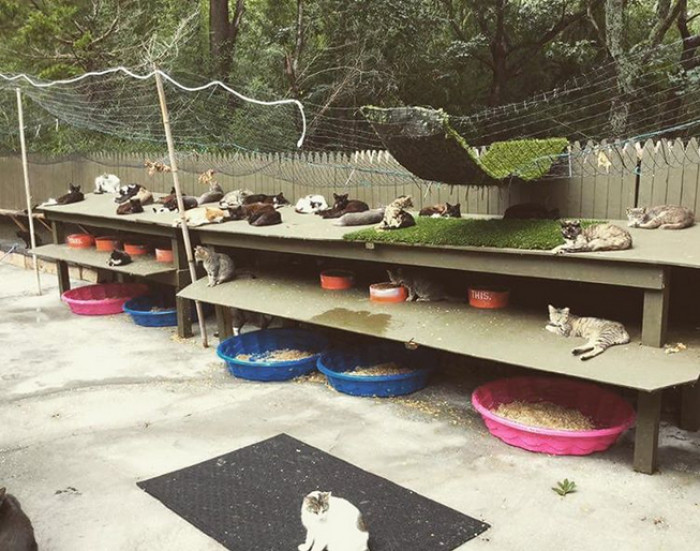 The most important thing to me is that they’re comfortable and that everything is kept clean. 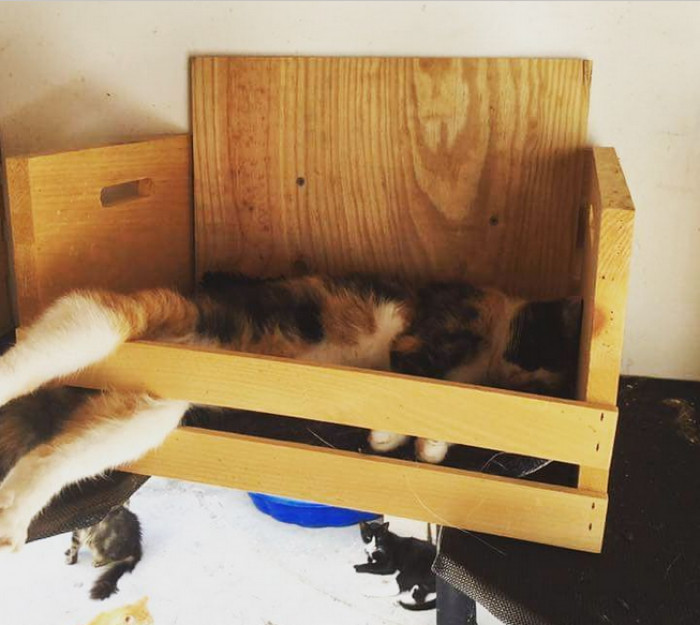 In the first few years of the sanctuary's life, Arsenault says he was caring for nearly 70 cats at a time. And the cats are coming from a wide-variety of backgrounds. Some of them were able to be adopted out, but others of them were "semi-feral," which meant they weren't what one would consider "pet material." At the same time, being semi-feral meant the cats couldn't survive on their own the way a true feral colony could because they depended on humans for food. 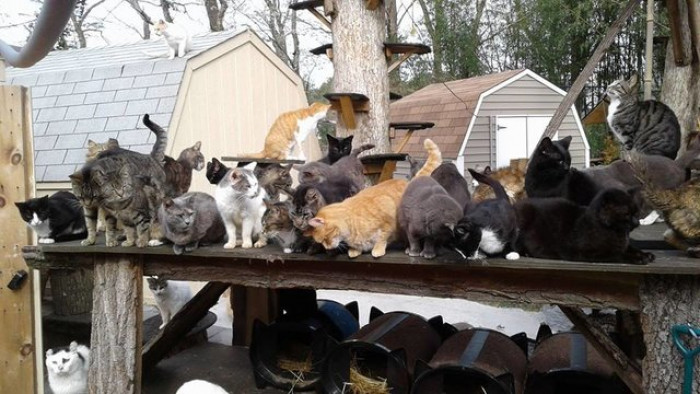 Most were saved from the streets or brought in from hoarding situations. A very small percentage of our cats are owner surrenders, but it does happen. 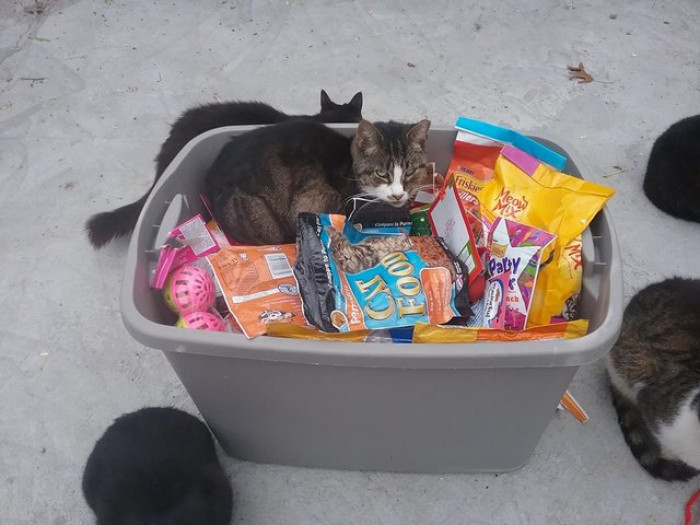 Other kitties were rescued from even more traumatic backgrounds including being used as bait in dog fighting rings. Despite the trauma, The Happy Cat Sanctuary gives freedom to these cats. They can safely "roam, scratch, lounge, and climb."

All cats are neutered, have access to vet care, and are regularly brushed and given lots of love and attention. 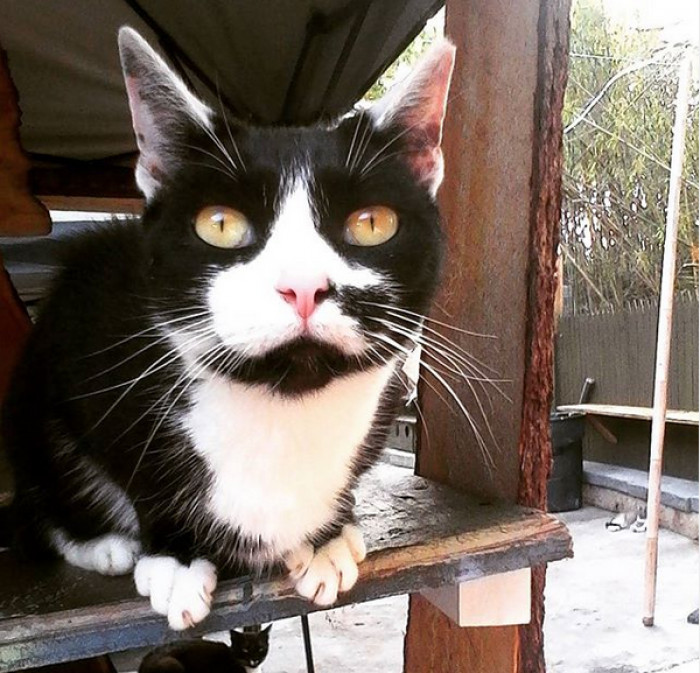 Astonishingly, two years ago an anonymous patron donated $200,000 to the sanctuary! Arsenault was able to go from caring for 70 cats to make huge renovations, expanding his facility to make room for more cats. Renovations that made room for the now booming 300 count. In addition to the awesome facilities mentioned earlier, the outside areas feature tree structures and hammocks for the cats. 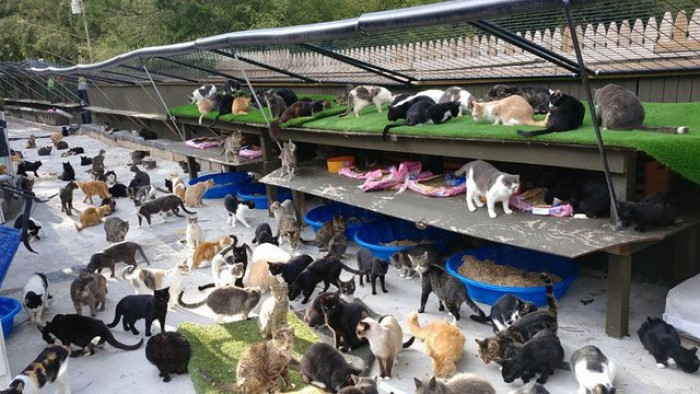 Today, Arsenault has several employees that help care for the cats and a routine, or schedule in place to keep things running smoothly.

Around 7 or 8am every day, Arsenault arrives to the facility. He begins cleaning out litter boxes and water dishes before proceeding to breakfast. Observing, you can clearly see the cats are accustomed to their daily routine. Arsenault says:

They get so excited when I come in in the mornings. We have a great system and everybody waits very patiently. 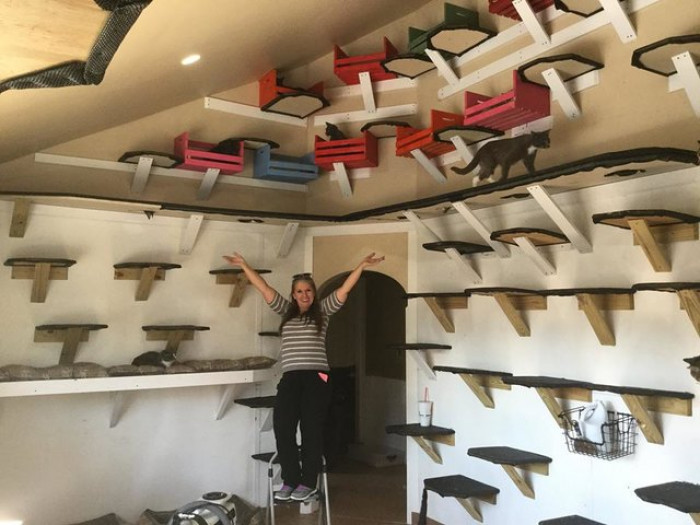 The sanctuary isn't just for pampering and spoiling, either. There is also a medical ward to give any sick or injured cats the extra space and attention they need to recover. 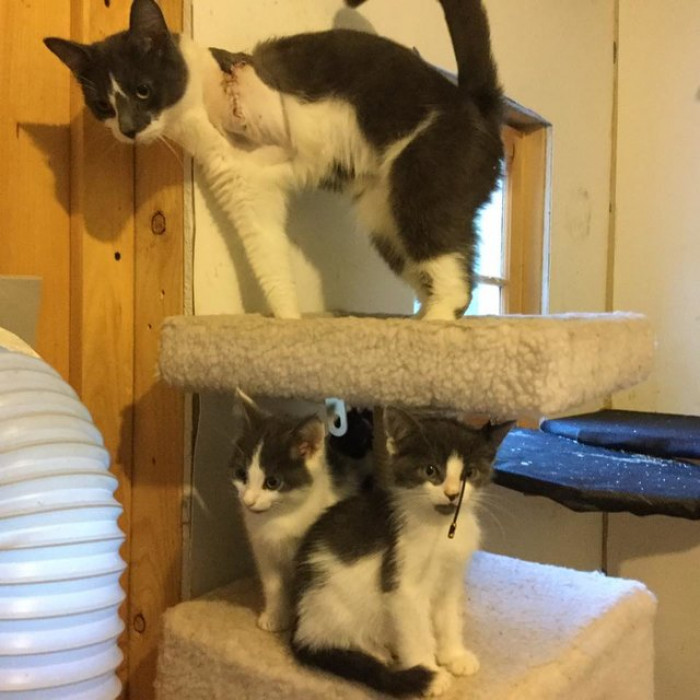 Now, several years into the cat rescue and rehabilitation "business," Arsenault says he has taken in cats with all sorts of medical issues. Some as difficult as cats that have been poisoned or shot at by humans, while others may have been hit by a car or are suffering from feline immunodeficiency virus (FIV.) 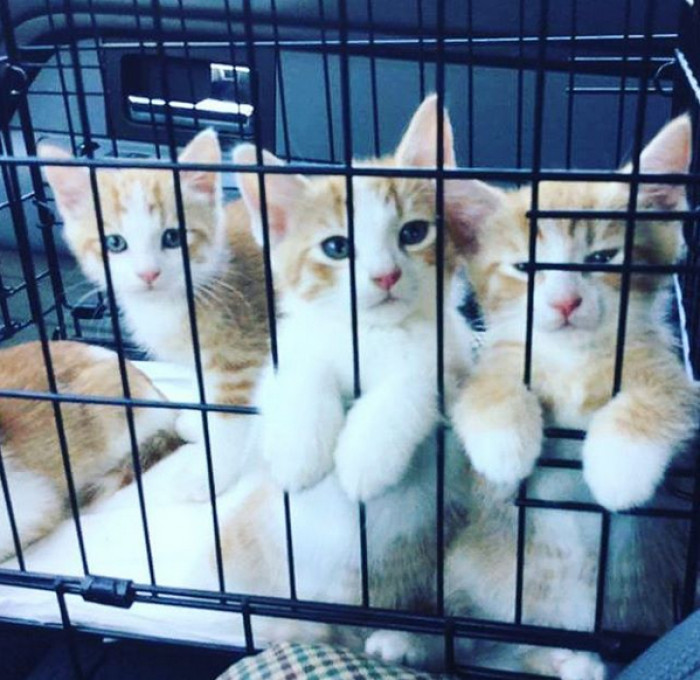 However, Arsenault does not turn cats away. While some cats may have a family out there awaiting the day they come together, plenty will have a forever home at his sanctuary:

When we take a cat in, I know there’s a chance that they may be here for the rest of their days... But that’s OK. 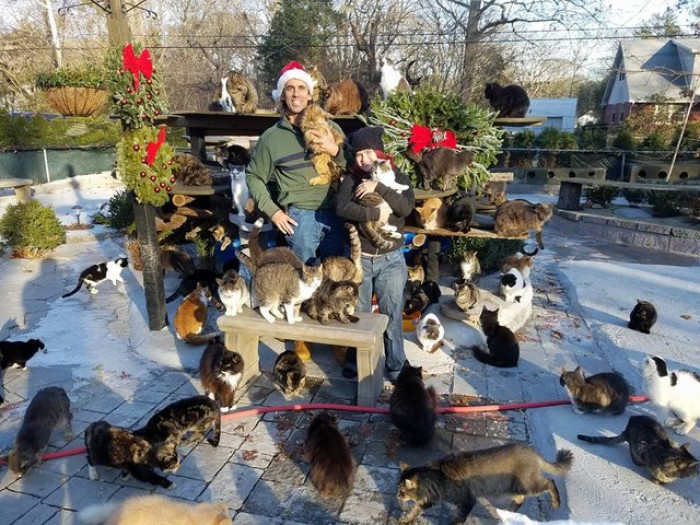 That's not all Arsenault and Happpy Cat Sanctuary are doing, either. He also manages a “trap-neuter-return” program. The program has already significantly decreased feral cat populations throughout New York's Suffolk County, which we previously mentioned is over-burdened. He said:

When we do get calls about kittens, I take them in until they’re adopted out. We work with All About Cats in Freeport to handle all of our adoptions. 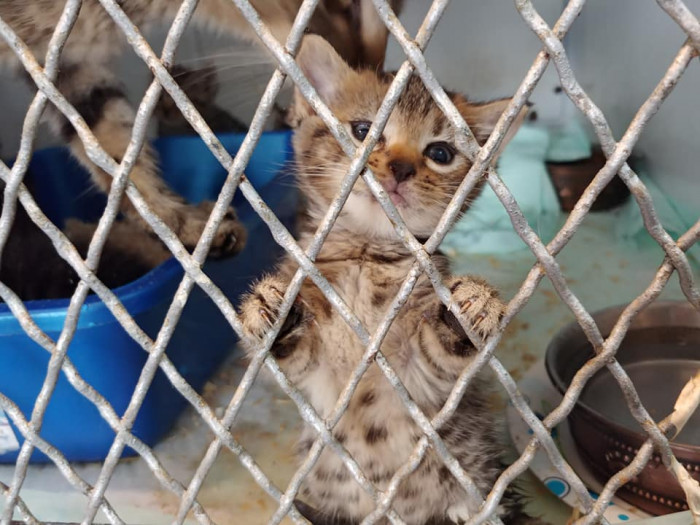 Years deep into the sanctuary, Chris Arsenault has given a "safe haven" to thousands of cats who needed a free-range sanctuary life, and he has placed hundreds upon hundreds of homeless kittens and cats into forever homes with the purr-fect families. 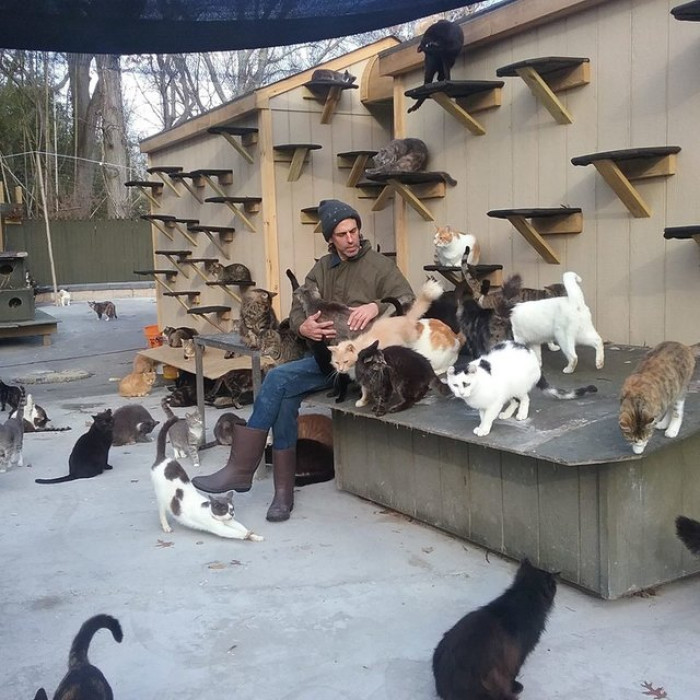 When you love animals, it’s so worth it. It’s really rewarding being able to just see the cats happy and healthy climbing around on tree structures or basking in the sun. That’s how nature intended. Giving them a good life and a safe place to live — can’t ask for anything better. 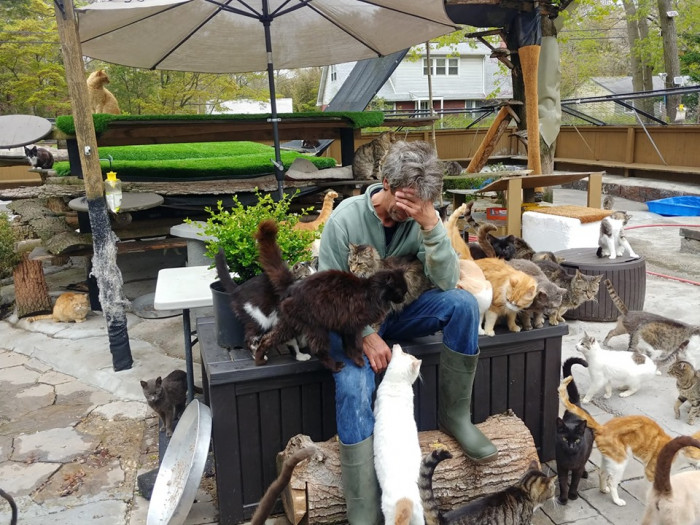 Also, check out this awesome video of the Happy Cat Sanctuary in action!

You can also help with fundraising attempts here.