Nicole, a woman from Germany, had always wanted a cat. Who doesn't? Only weirdos don't want cats. Nicole had spent months pondering the decision and weighing the pro's and con's, trying to figure if it was time to take that step when she visited a farm with her sister. It would seem fate intervened with her indecisiveness because before her eyes were a precious pair of four-month old kittens. The kittens were in terrible shape and in urgent need of medical care.

In an interview with Love Meow, Nicole said:

They were in a desolate condition with mites and infections in their ears. It hurt me to see them suffer, so I took both home.

With the love and attention Nicole and her sister provided, the two sweet tuxedo kittens were nursed back to health! The kittens were given purr-fectly adorable names: Elli and Rosie.

Nicole bonded especially with the kitten she named Elli. 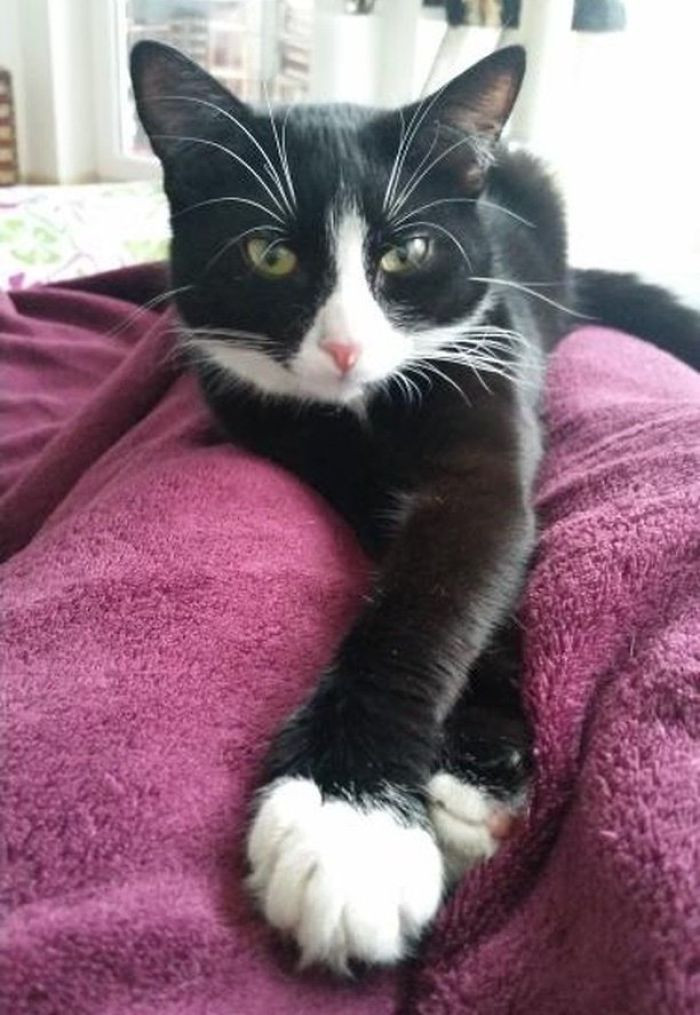 Nicole described Elli as being affectionate, loving to cuddle and snuggle, but that wasn't all:

She was very playful and sometimes acted more like a dog than a cat! 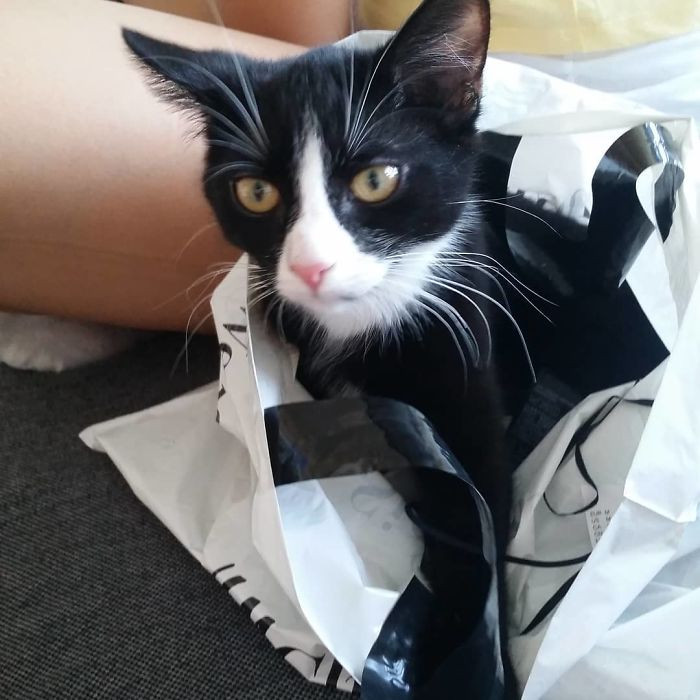 However, after only nine months, Nicole noticed something... peculiar. A small spot of Elli's fur had turned white. At first, Nicole was confused:

It wasn't there at the beginning. I thought it was lint and tried to remove it, but it turned out to be her fur. 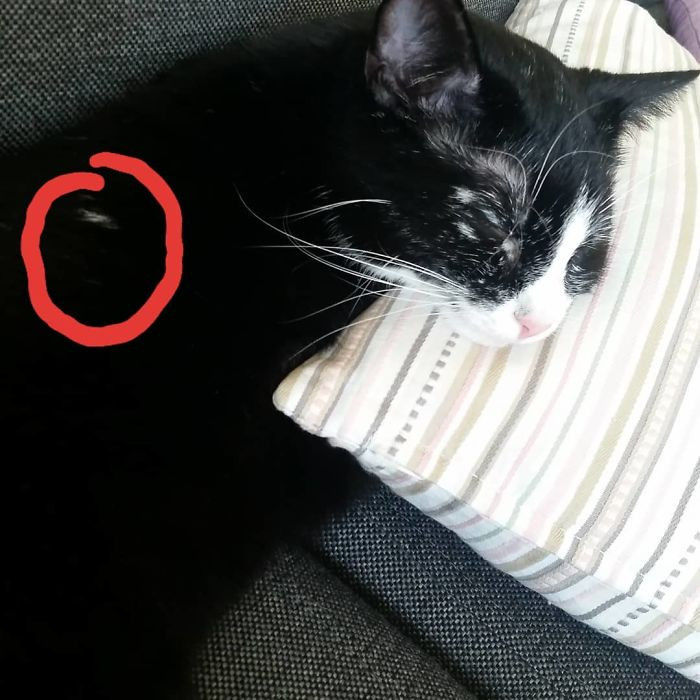 While her initial concern was easily dismissed, the next few months it became impossible to ignore the growing number of white-fur patches, overtaking Elli's classic tuxedo coat.

At this point, Nicole grew concerned and took Elli to see the veterinarian. 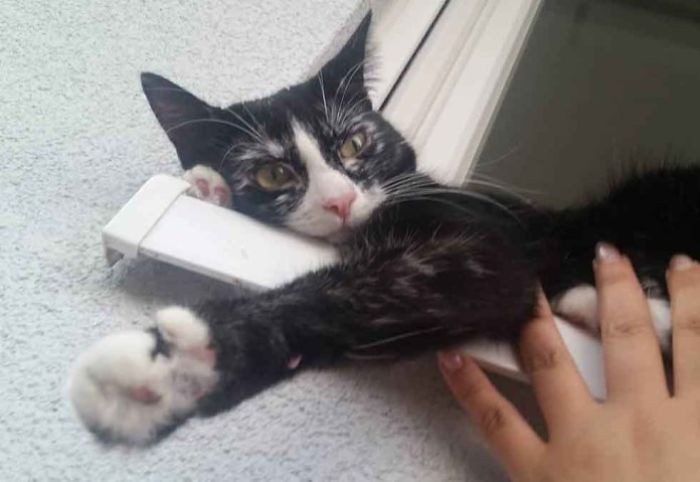 Thankfully, the vet relieved Nicole's worry by explaining that Elli had a rare condition called vitiligo.

Vitiligo is a long-term skin condition characterized by patches of the skin losing their pigment. The patches of skin affected become white and usually have sharp margins. It can also affect the insides of mouths and hairs. 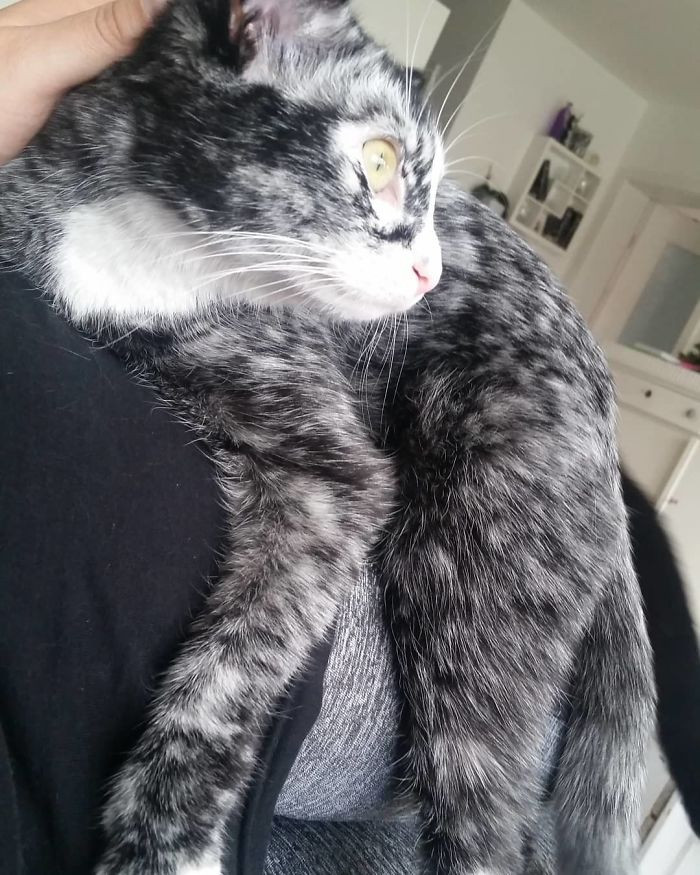 Vitiligo is rare, it only affects about 1% of the world's entire population in humans but it is even more uncommon in animals, and it can only affect a few animals like cats, dogs, and horses.

Thankfully, the condition doesn't have any negative side effects, including for Elli. It doesn't bother her or damper her quality of life. If anything, it makes her uniquely more adorable than most cats! 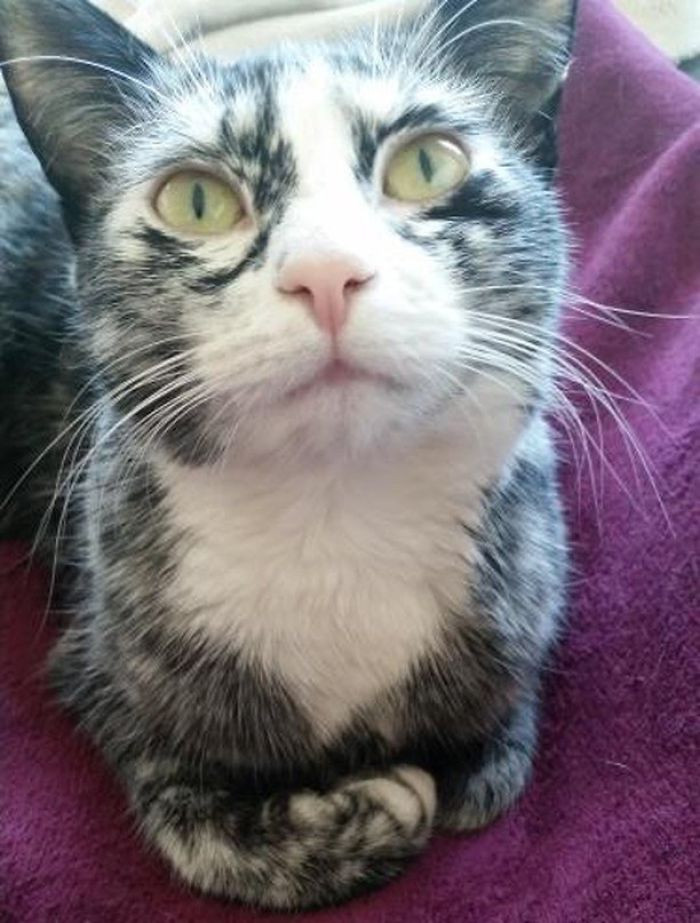 In only a year since the first white patch appeared, most of Elli's fur has transformed from the tuxedo cat she once was to a speckled snowflake of a special kitty. 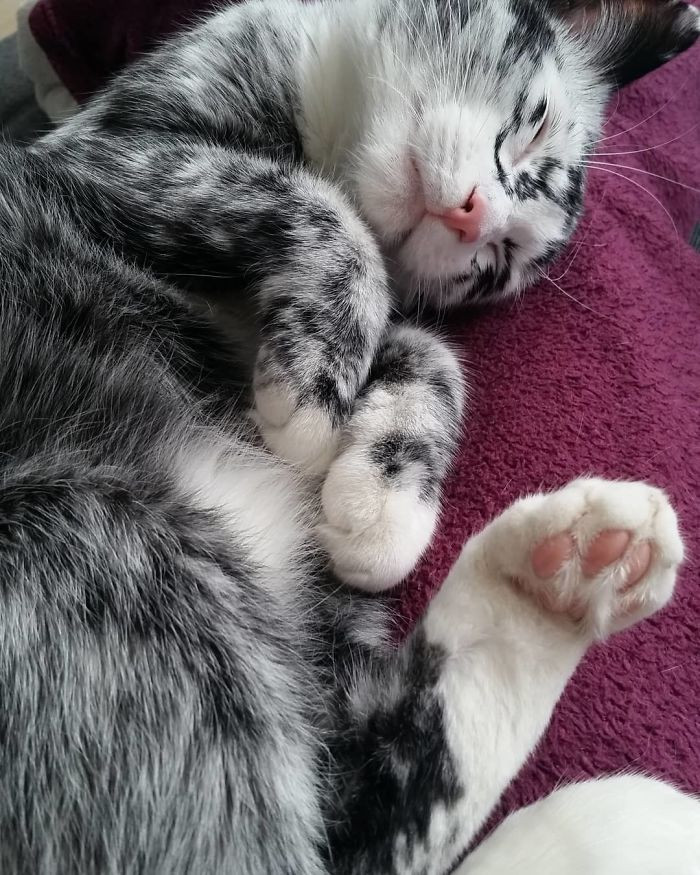 As mentioned, Elli's quality of life has not been hindered at all. She enjoys all the things most cats enjoy, but when she perches up high on doors, Nicole things she, "looks like a snow owl!"

We're inclined to agree, especially with those big, beautiful eyes! 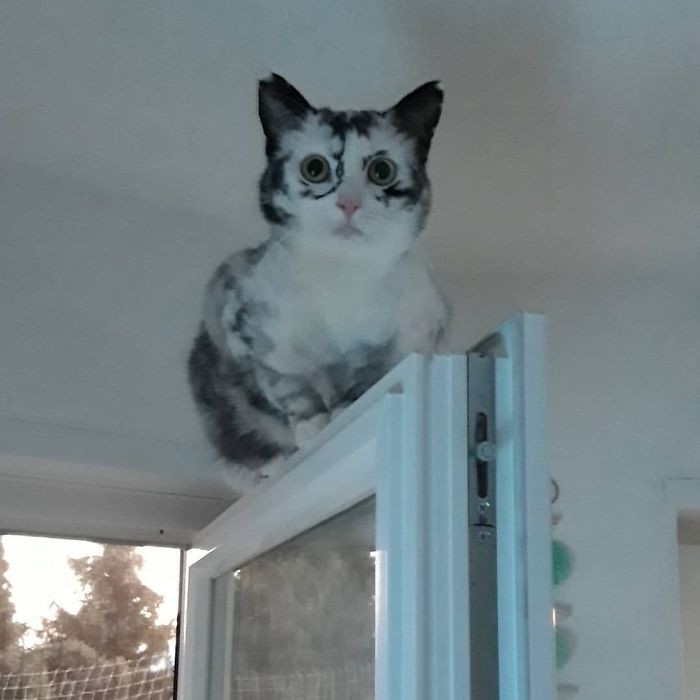 Nicole says, "she is so cute and her fur continues to change every day."

Elli is a curious companion, following Nicole everywhere she can, spreading joy only a cat like Elli could spread! 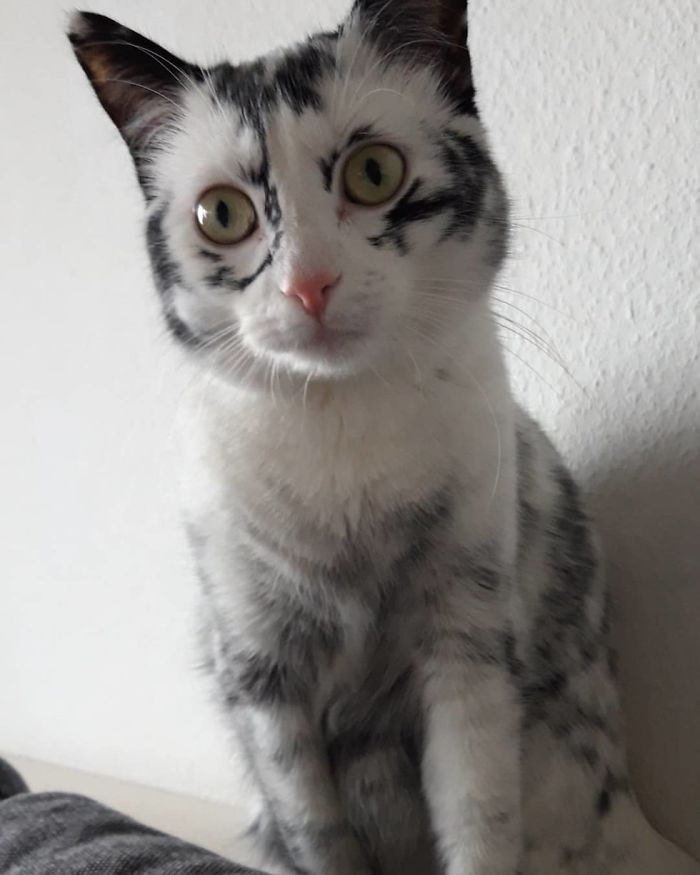 Elli also loves her sister Rosie, who has maintained her adorable tuxedo fur pattern and displays no signs that she, too, has vitiligo. 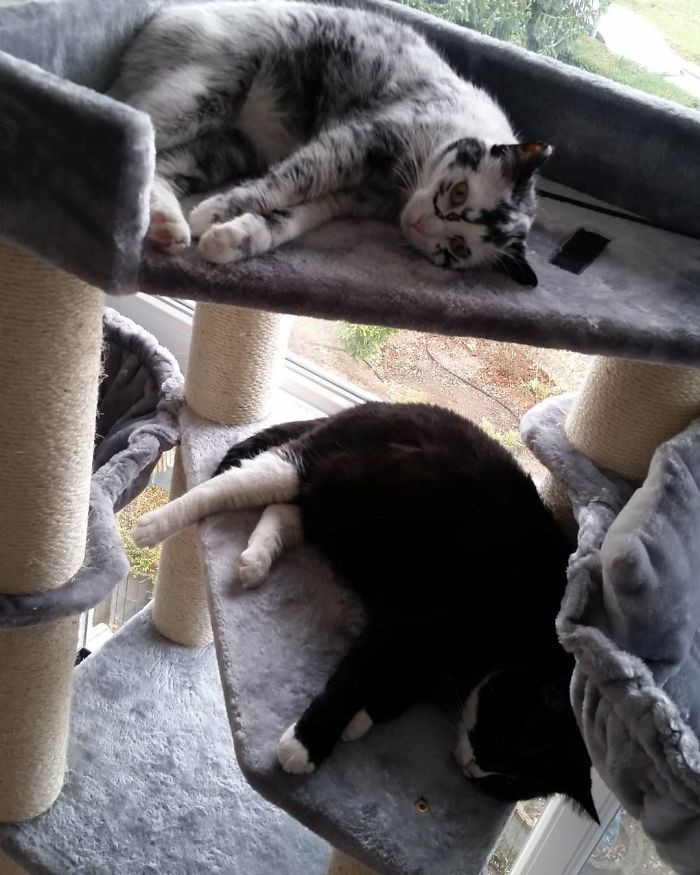 From tuxedo to snowflake, Elli is a special kitty! And we're definitely not complaining that Nicole decided to share her unique kitty with the world! 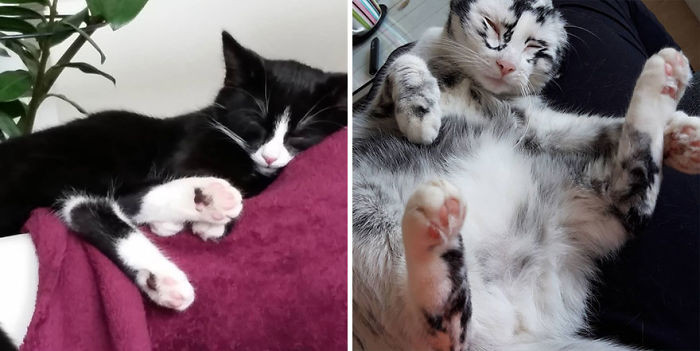 Elli sure is beautiful. 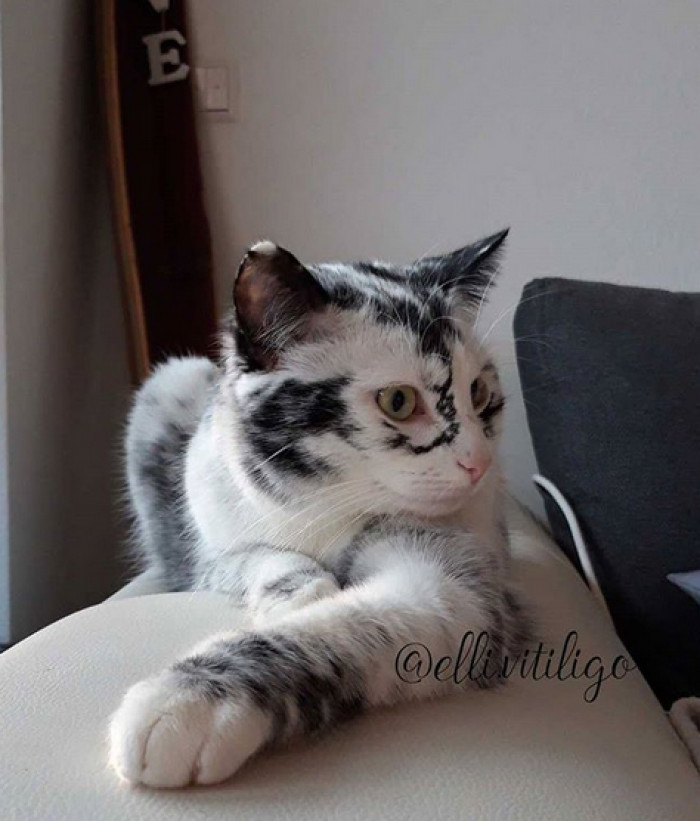