In September of 2012, the Internet birthed a new meme sensation when a photograph of Tardar Sauce was posted to Reddit and we were all permanently transformed. As an American cat celebrity, she was henceforth known as Grumpy Cat. Grumpy Cat has become every grumpy meme imaginable over the years and while we could never stop loving the sweetie it may be time to move on to the next grumpy star of the cat world: Loki the Grumpy Sphynx.

Sphynx cats already are widely known for their seemingly unusual appearance, to name a few things that are fascinating about the breed, but every now and then a specific Sphynx rises above the rest and that's just what Loki is aiming to do. Loki’s owners, Brent Erickson and Sara Kjelsvig insist that despite his supremely grumpy appearance, he is as sweet and loving as any cat could be. It's no surprise since this is the reputation Sphynx have for their purr-sonalities:

It’s a good thing that the Sphinx loves attention because he draws it wherever he goes. He is demanding of human attention and will do anything for a laugh. “Look at me!” is his catchphrase. That makes him easy to handle by veterinarians or anyone else, and it’s not unusual for a Sphynx to be a therapy cat since he is so fond of meeting people.

One of Loki's owners, Sara, loves to dress him up in fuzzy sweaters... especially in the winter! Since Sphynx cats do not have the typical fur coats cats are known for, it is important to help them regulate their body temperature. It is not uncommon to see a Sphynx cat dressed in clothing but to see Loki's grump appearance in an adorable and cheerful sweater is surely a sight for sore eyes. 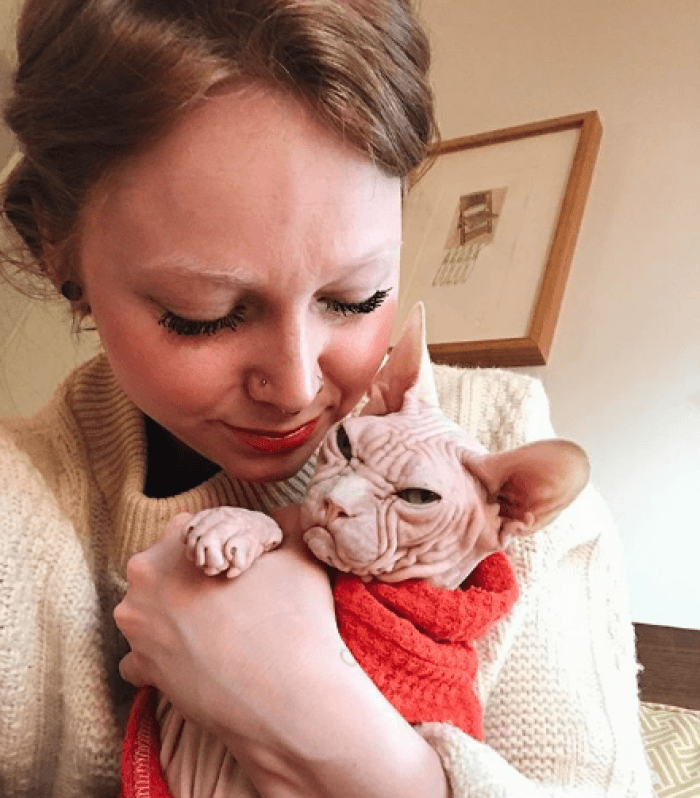 Loki and his family live in New York City so he definitely needs to have a wardrobe to go with all four seasons. 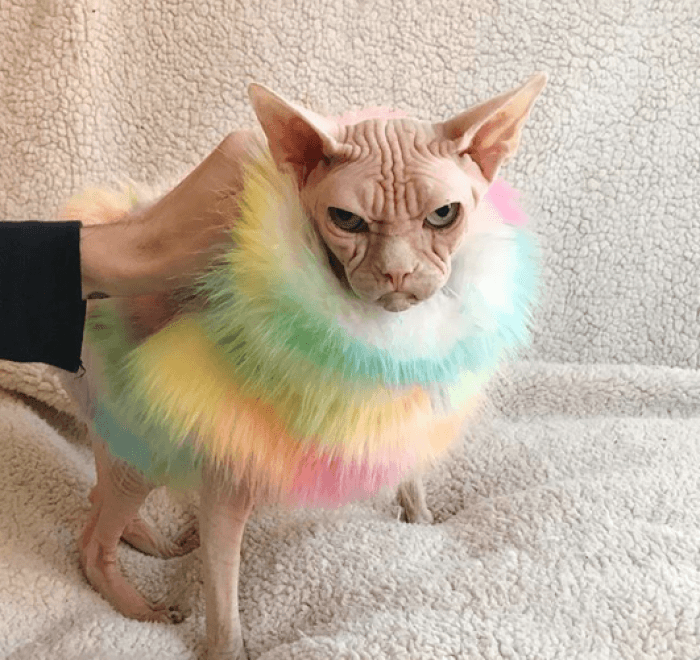 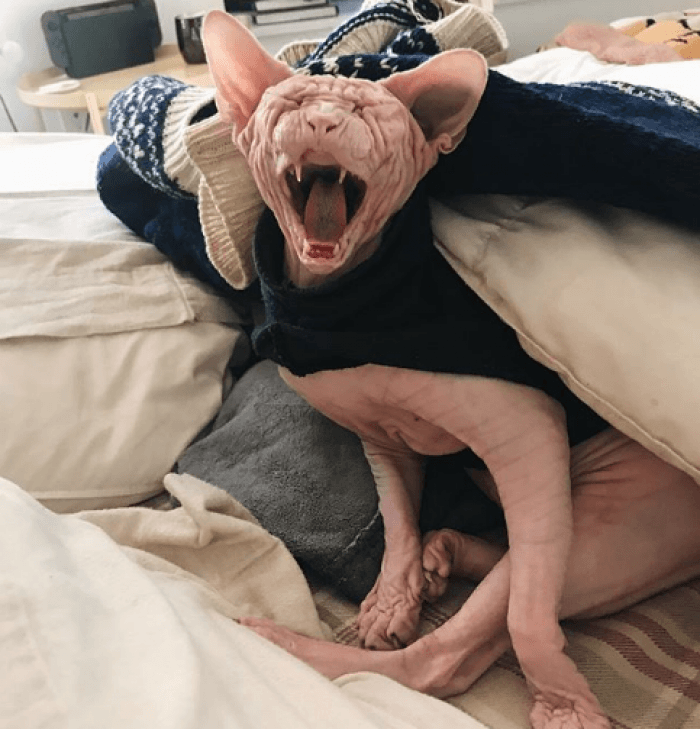 4. To sneeze, or not to sneeze. That is the question.

Loki's "I'm about to sneeze" face definitely looks a lot more like, "I'm so done with you people." 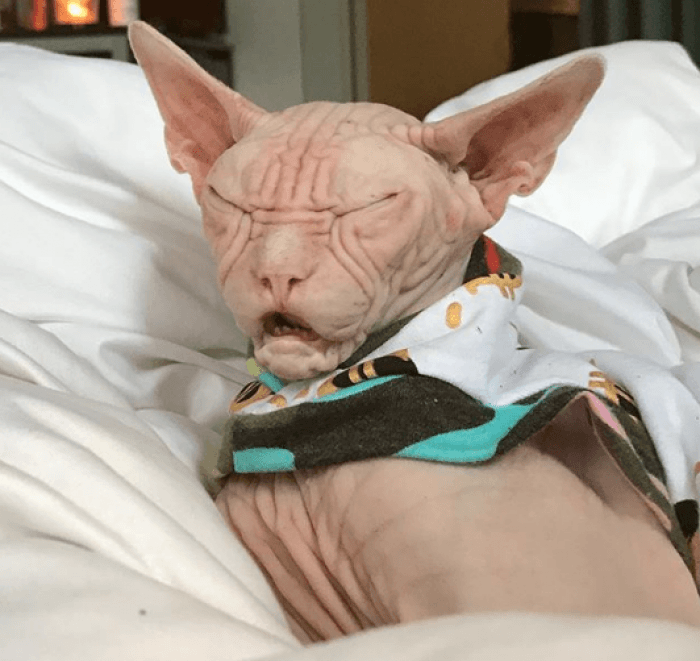 5. The Grinch who stole our hearts. 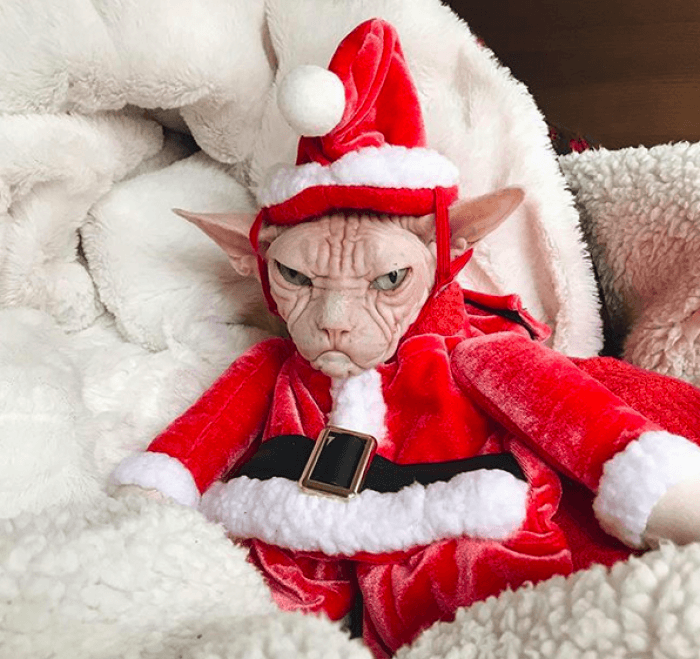 Loki just wants to sleep but these humans aren't having it. 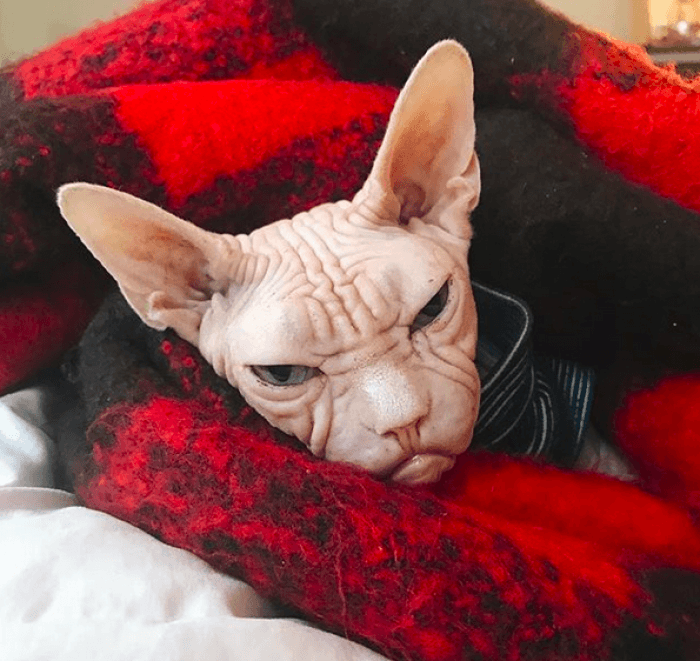 Loki's staring down the camera in his mustard-yellow sweater and it is precisely this facial expression that is giving all other grumpy cats a run for their grumpy money. 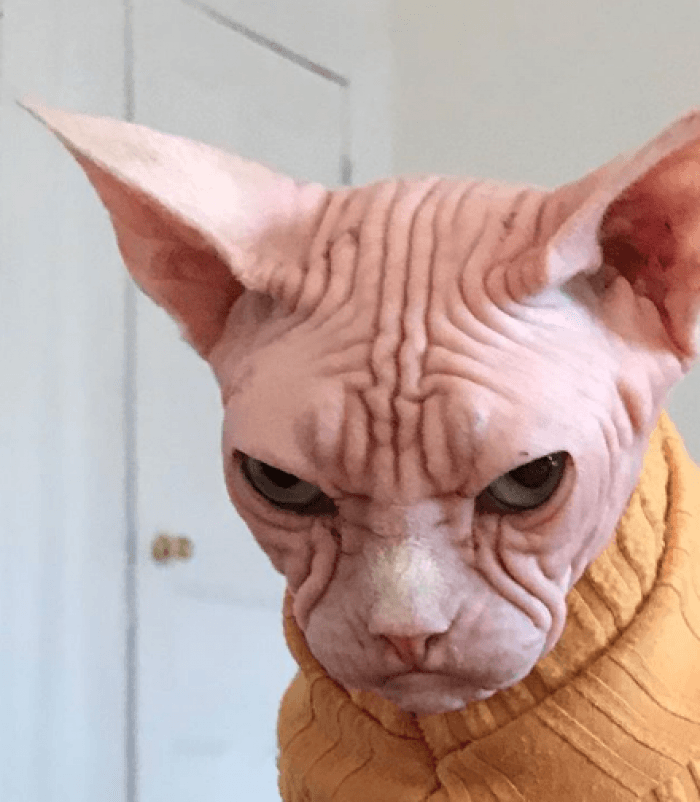 Loki is getting snuggled by his other owner, Brent. We aren't sure if he's unhappy looking or really unhappy but we are sure that he is very loved. 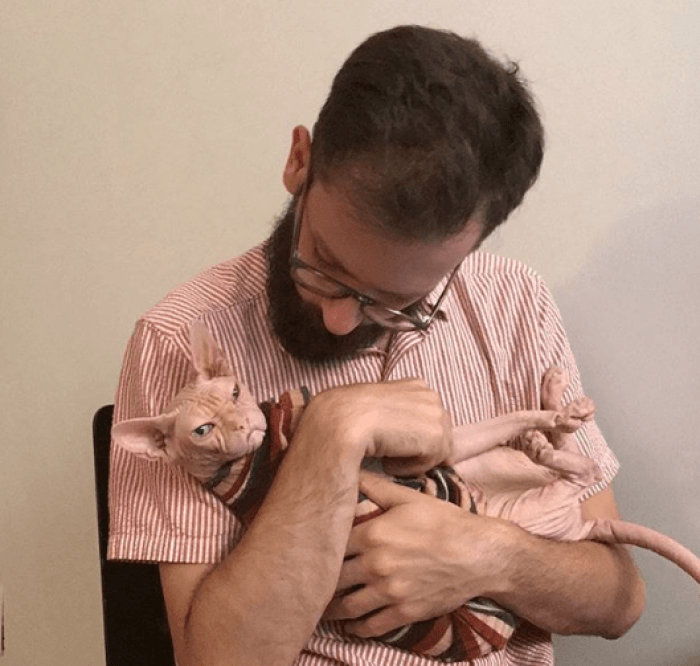 Loki is modeling his Halloween costume and we can't stop laughing. 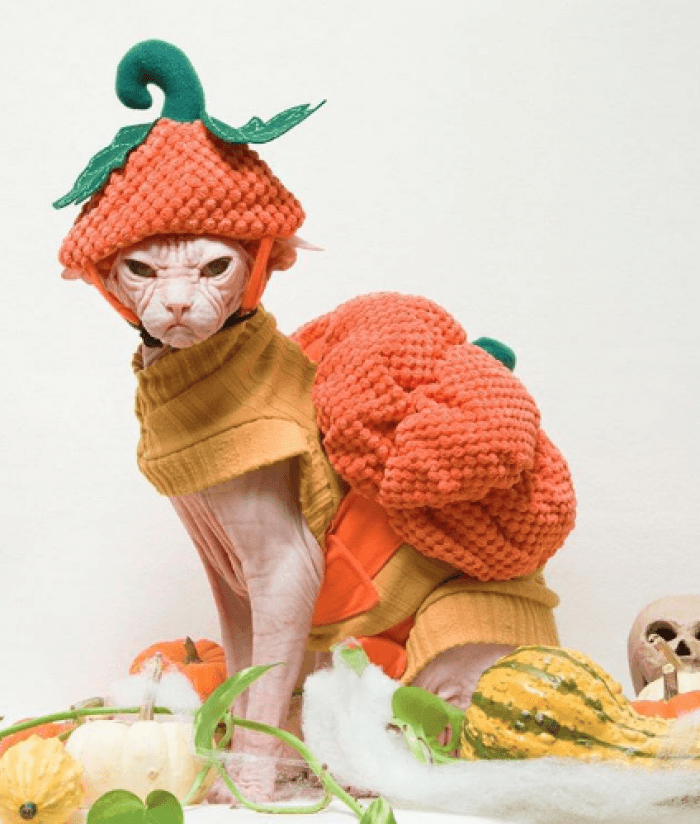 11. "Soon the rebellion will be crushed and young Skywalker will be one of us." 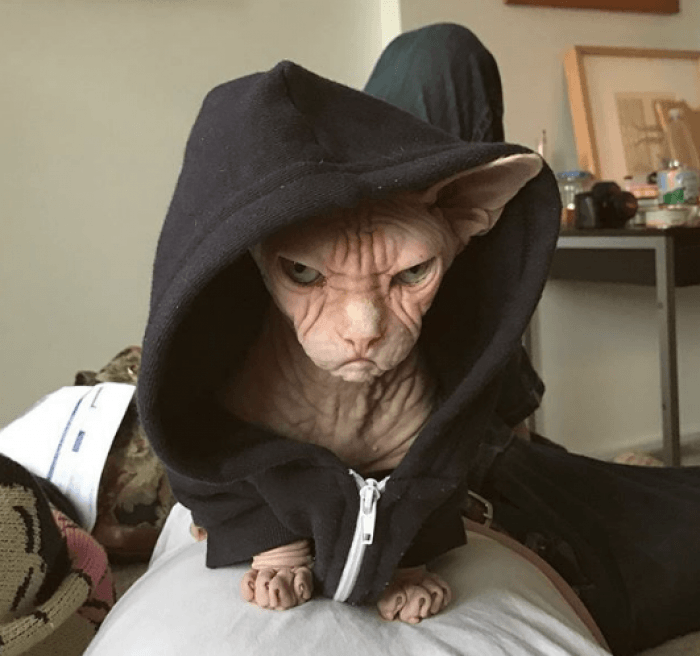 12. All hail the new Grumpy Cat

I, for one, welcome our new grumpy spokesman. 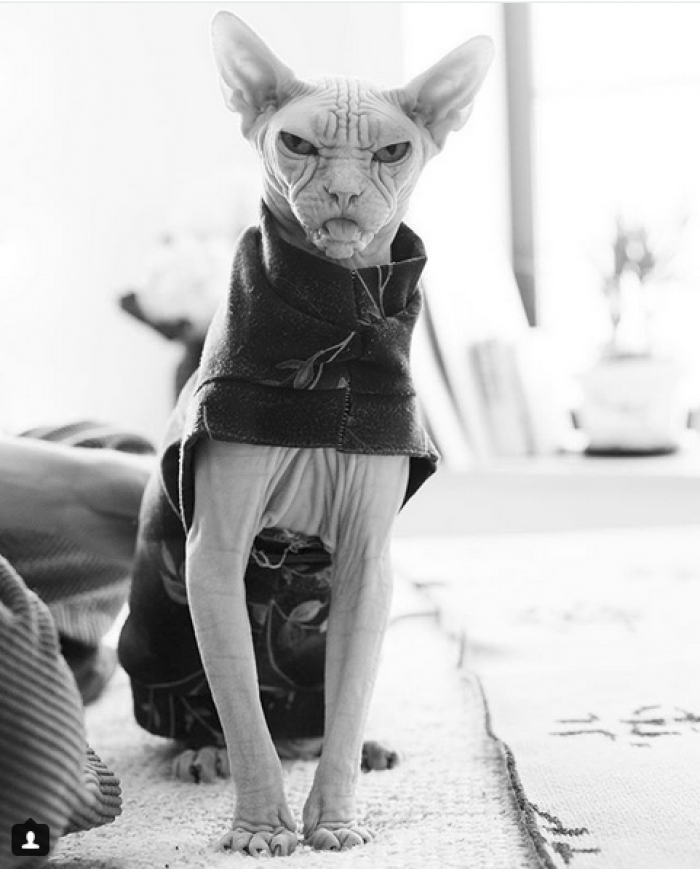