Cat Reunited With His Family After Being Lost For 536 Days

When Mindy Criner and her husband Luke first decided to adopt Cat from the Peninsula Regional Animal Shelter in Virginia, they knew it would take a little bit of work to bring out his confidence. Cat was very shy. But Mindy knew in her heart that all he needed was some love and time.

“You could see in his eyes he just needed love,” she said.

After some time, Cat settled into his home with Mindy and Luke and became a beloved member of their family. They never regretted their decision to adopt the fur-baby.

Unfortunately, Cat may have gained a little too much confidence. He liked to wander around his yard, but one day he went a little bit further and when Mindy went looking for him, Cat was nowhere to be found.

Naturally, Mindy and Luke were frantic. They did everything they could think of to try and find Cat and bring him home.

Mindy immediately contacted the Lost & Found Pets - Hampton Roads, VA, Facebook page to have them spread the word on Cat. At home, they placed a litter box and food outside, hoping that the familiar smells might lead Cat home.

They tried everything, but after a while, they began losing hope. 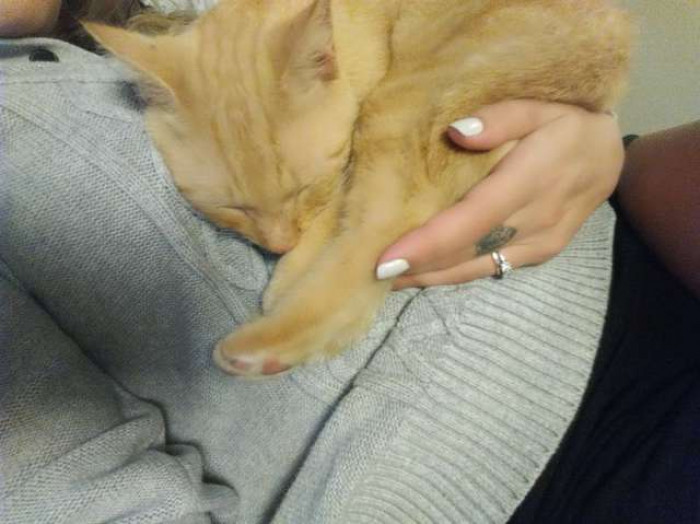 “Weeks turned to a year, then a little more and every day that crack in my broken heart got a little bigger,” Criner said. 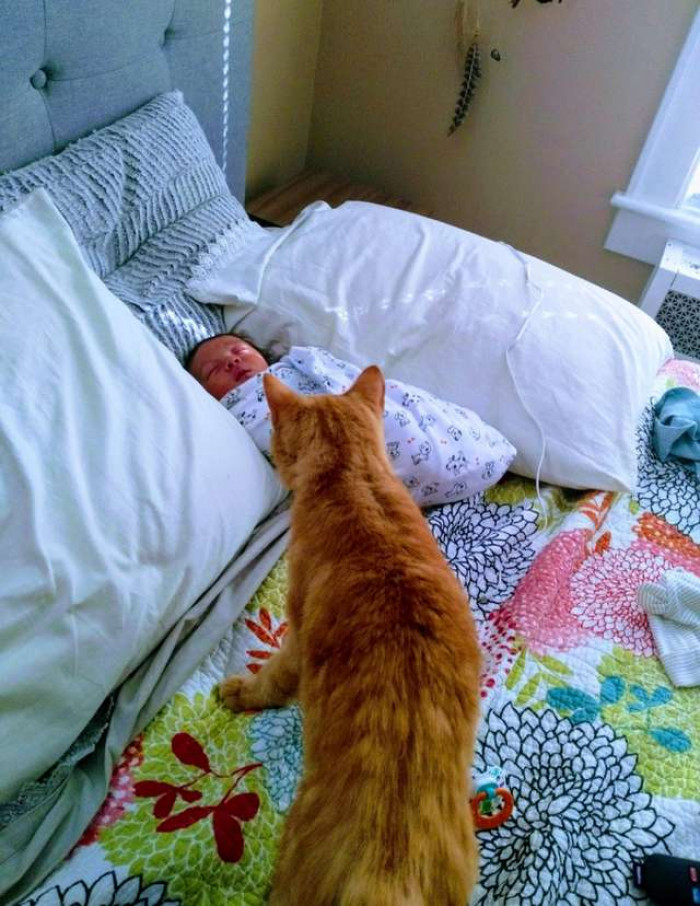 Then, out of nowhere, 536 days after he went missing, Mindy got a call she will never forget. Someone had found Cat! 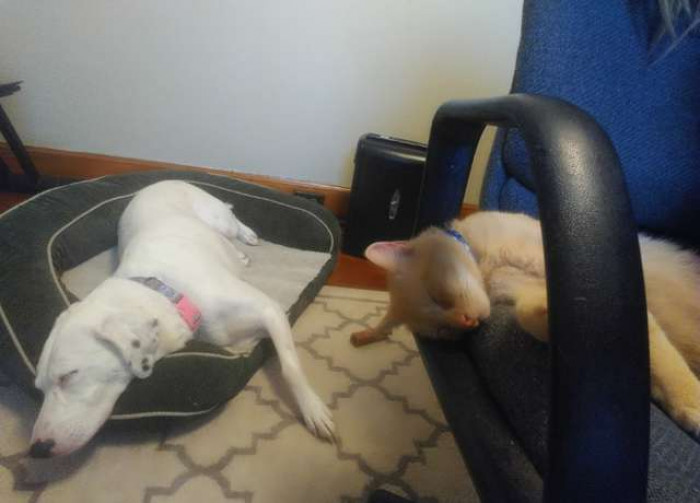 “I thought it had to be a mistake,” Criner said. “The voicemail from animal control said to get in touch with Peninsula Regional Animal Shelter to find him. I drove to that shelter as fast as the law allowed and walked through the door already fighting back tears.”

When Mindy arrived at the shelter, she was told that a man had been feeding Cat for about a year. He thought he was a stray. After Cat had been hit by a car, the man contacted animal control, who then scanned Cat for a microchip and discovered who he belonged to.

Mindy contacted the man straight away and drove over to his house. She saw Cat sitting on the porch having something to eat, and as soon as they saw each other, it was as if they had never been apart.

“I sat on the steps and let him come over to me in case he was scared, and he got right in my lap and purred,” Criner said.

“I started walking towards the car where my husband (who has an incredibly distinctive voice), Luke, was talking to the guy that had been feeding him and Cat purred louder than I knew possible and gave me that first super long head boop. It's like he nudged that little piece of my broken heart back in place.” 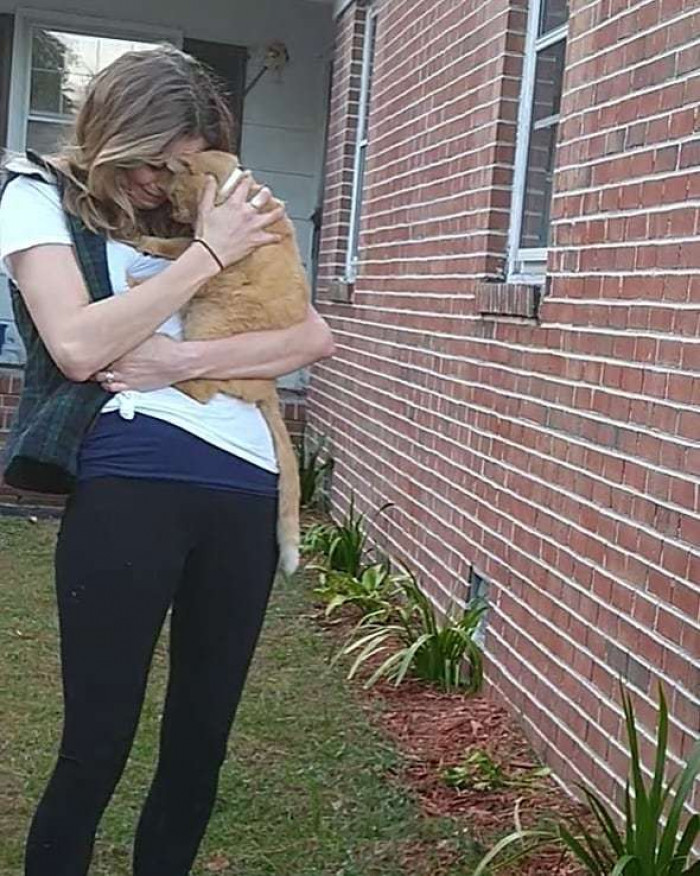 Cat knew he was going home where he belonged, and he couldn't have been more happy!

Cat settled straight back in at home almost immediately, even getting along with his new furry siblings and claiming back his old spots in the house as if he'd never left. 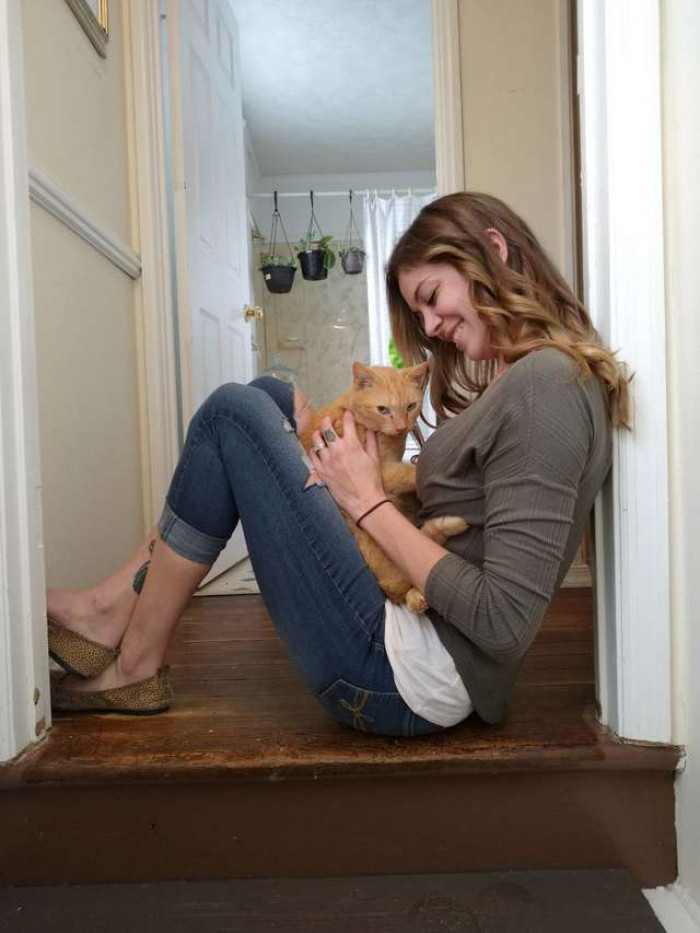 “I hope that our story will give others missing their pets hope, and maybe those who have unknowingly taken in someone else's pet will check to see if they're scanned so that pet can have their happy reunion with their family, and someone else can feel the overwhelming joy we're experiencing,” Criner said. 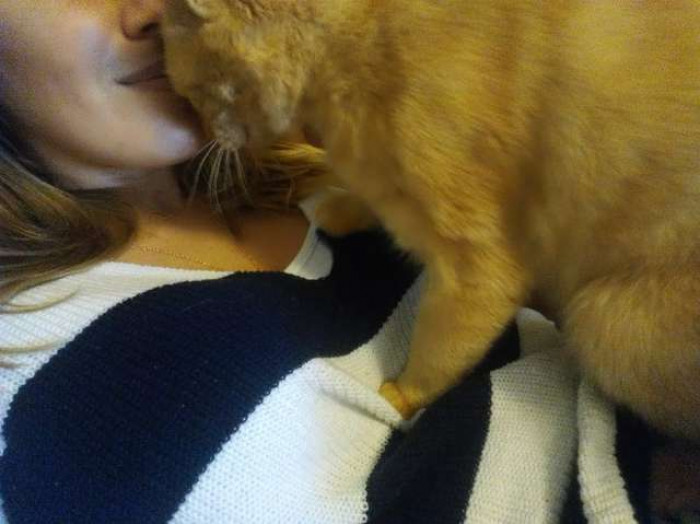