American literature icon Mark Twain was born Samuel Clemens in 1835. Twain was known for many things, most especially his most iconic novels "The Adventures of Tom Sawyer," and "Adventures of Huckleberry Finn." He was lauded as the "greatest humorist this country has produced," and fellow novelist William Faulkner called him "the father of American literature."

Mark Twain's life was colorful and littered with fascinating life experiences, many of which propelled him deep into his career as a writer. The trivia and fascinating tidbits we know about him definitely help us appreciate his skills and talent as a writer but as we've discovered his apparent and undeniable fondness for cats, we suddenly feel a deeper connection... because we all know that love of cats.

Sitting with a kitten, we wonder if Mark Twain found himself conversing with the little mews the same way we do today. 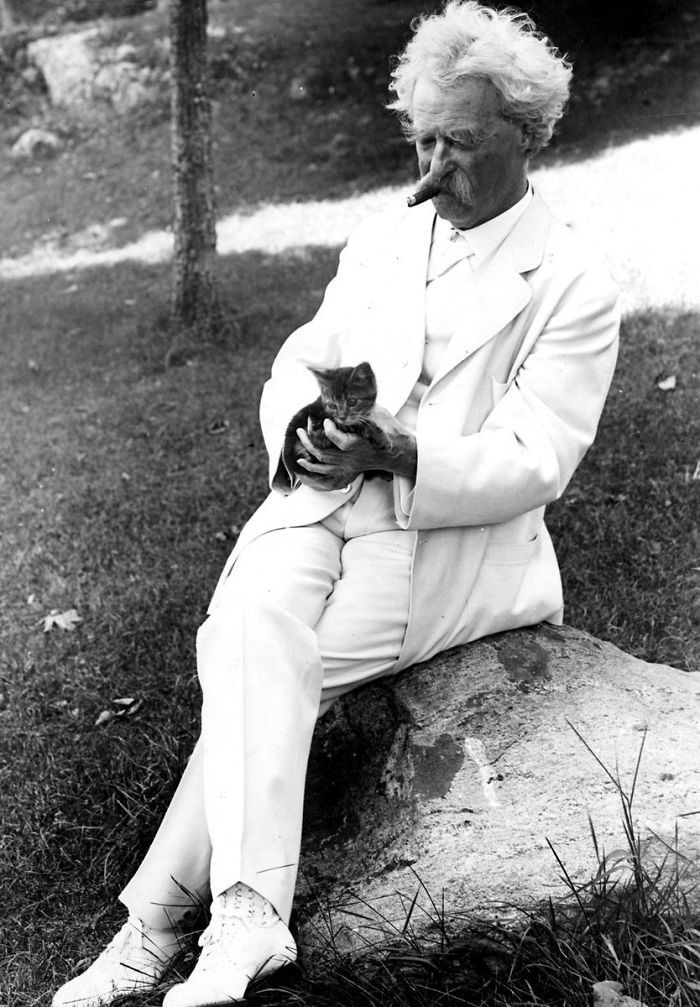 Mark Twain was born shortly after the appearance of Haley's comet. He once joked (or predicted, depending on your perspective) that he would "go out with it" as well; he died the day after the comet returned. 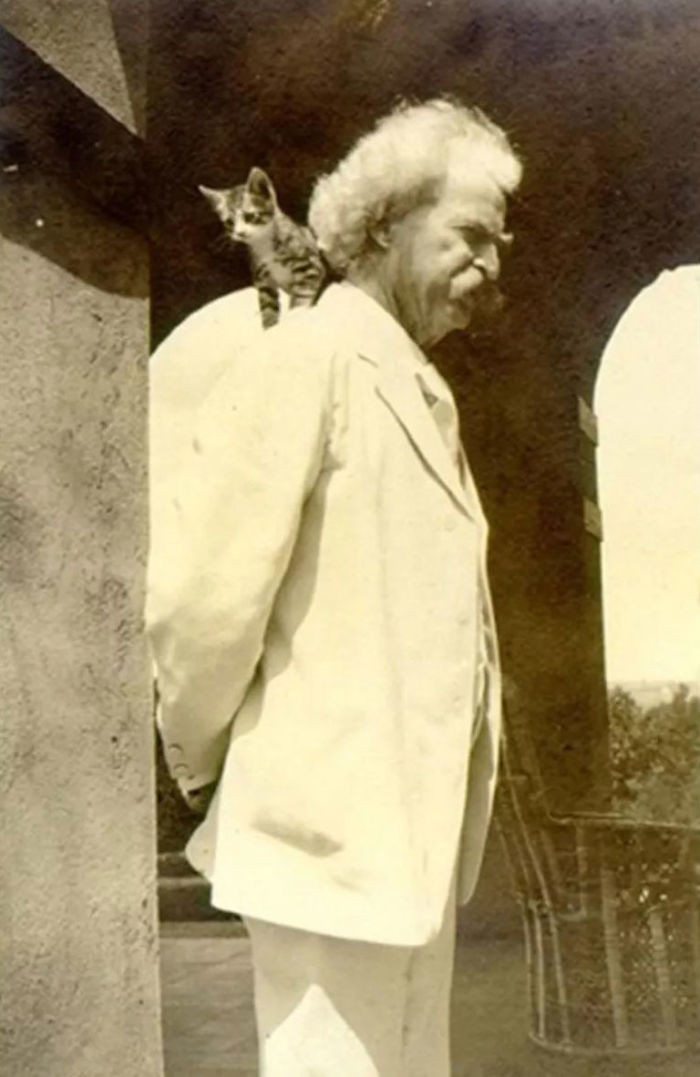 Some of his most famous cat-related quotes:

“If man could be crossed with the cat,” he once wrote, “it would improve man, but it would deteriorate the cat.” 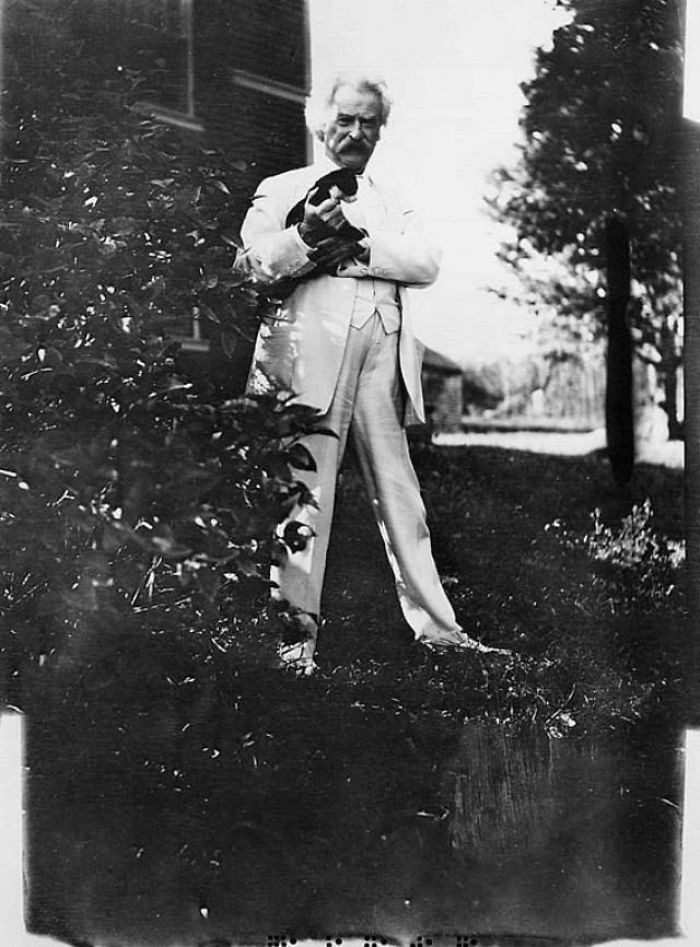 Over the course of his life, he had up to 19 cats and each one had a unique and adorable name: Apollinaris, Beelzebub, Blatherskite, Buffalo Bill, Satan, Sin, Sour Mash, Tammany, Zoroaster, Soapy Sal, Pestilence, and Bambino.

"When a man loves cats, I am his friend and comrade, without further introduction." 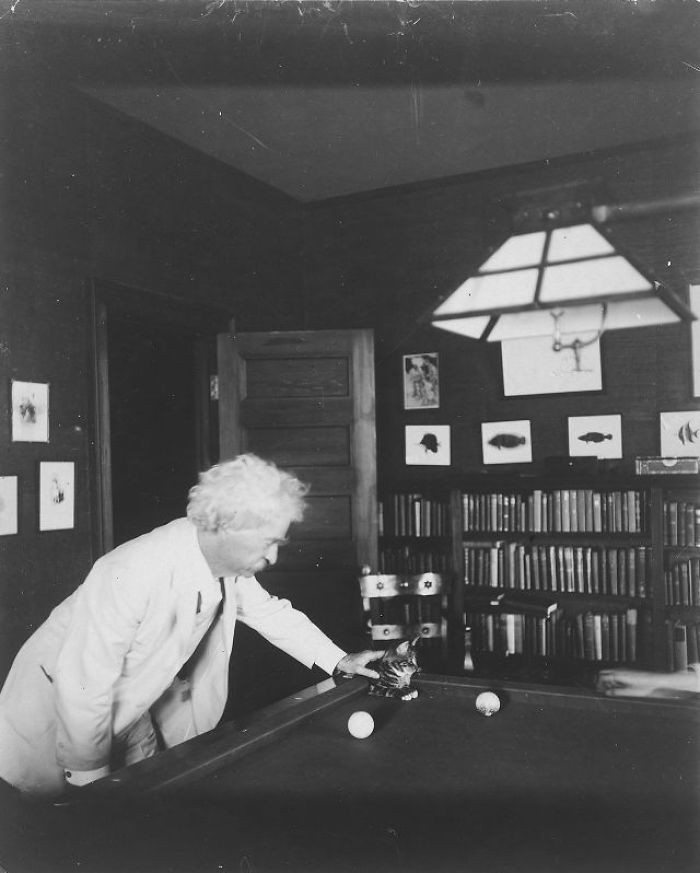 5. Was his love of cats really a secret?

It was more of a lesser known fact but indeed it was known. In 1910, 6 years after his death, Concerning Cats: Two Tales by Mark Twain came out. The book tells two stories about cats and he reportedly would read the stories to his daughters to help them all asleep. 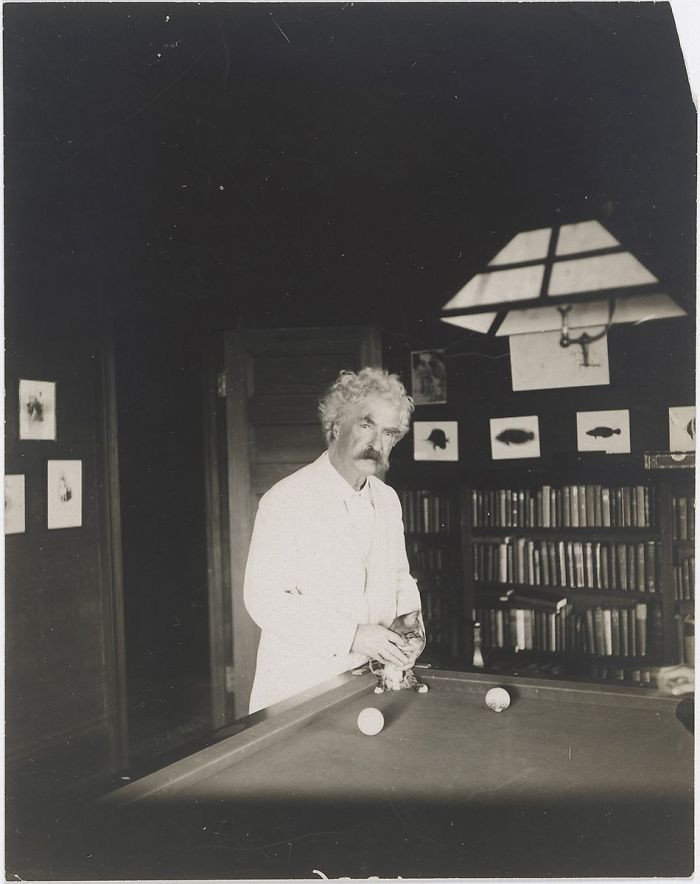 Twain really loved cats, so much so that when he went on vacation he would ask around the community to see if he could "rent" someone else's cats! Albert Bigelow Paine, a biographer who wrote about Mark Twain said that he was there when Twain rented three kittens one summer. He gave them temporary names (one was Sackcloth and the other two were identical so they shared the name Ashes.) Of the cat-renting escapades, Paine said:

He didn’t wish to own them, for then he would have to leave them behind uncared for, so he preferred to rent them and pay sufficiently to ensure their subsequent care. 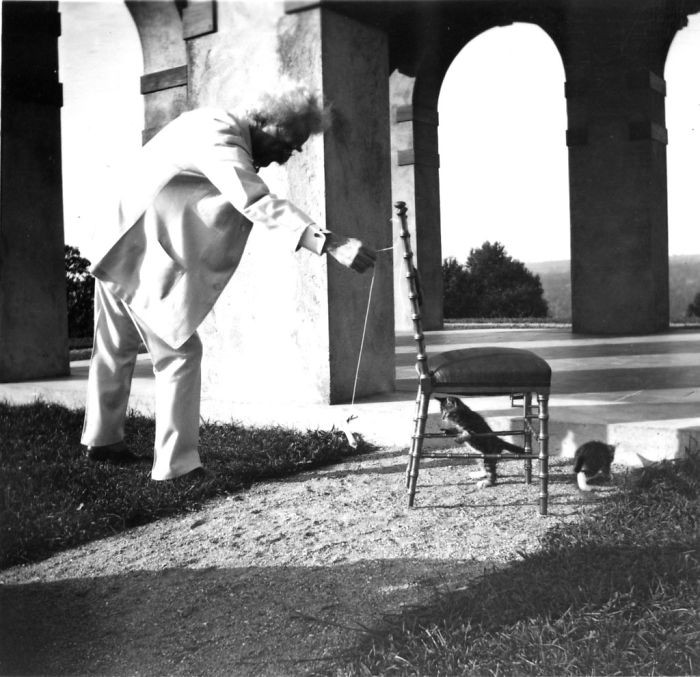 "I simply can't resist a cat, particularly a purring one. They are the cleanest, cunningest, and most intelligent things I know, outside of the girl you love, of course." 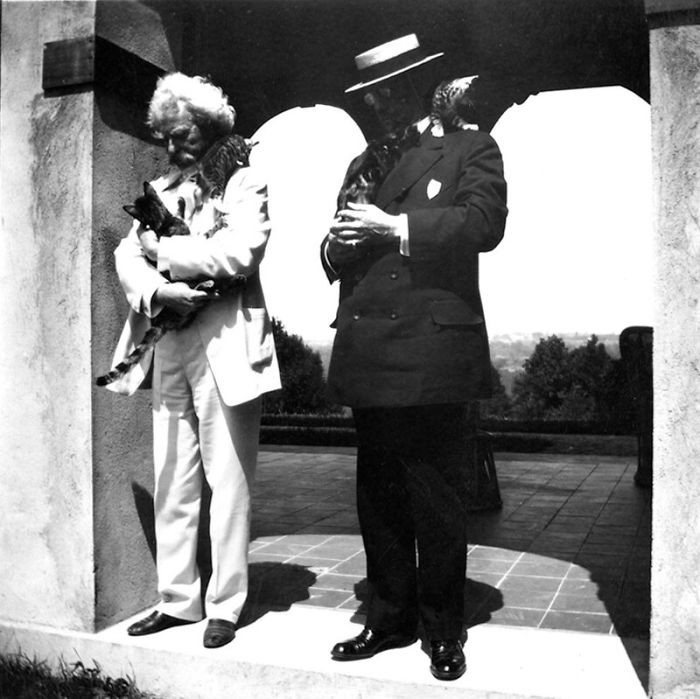 Mark Twain isn't the only 19th and 20th century author to have a distinct fondness for cats. Ernest Hemingway, T.S. Eliot, and Patrica Highsmith were all also known for loving their furry feline friends. 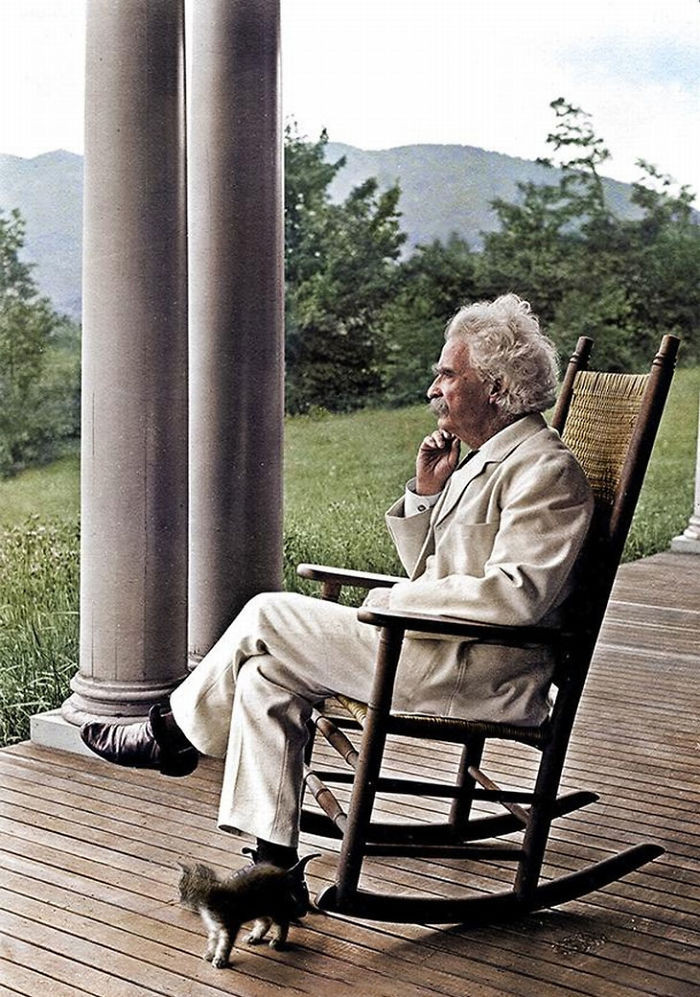 Twain biographer Paine recounted a telling tale of Twain and his fondness for cats:

Once, as he was about to enter the screen door that led into the hall, two kittens ran up in front of him and stood waiting. With grave politeness he opened the door, made a low bow, and stepped back and said, ‘Walk in, gentlemen. I always give precedence to royalty.' 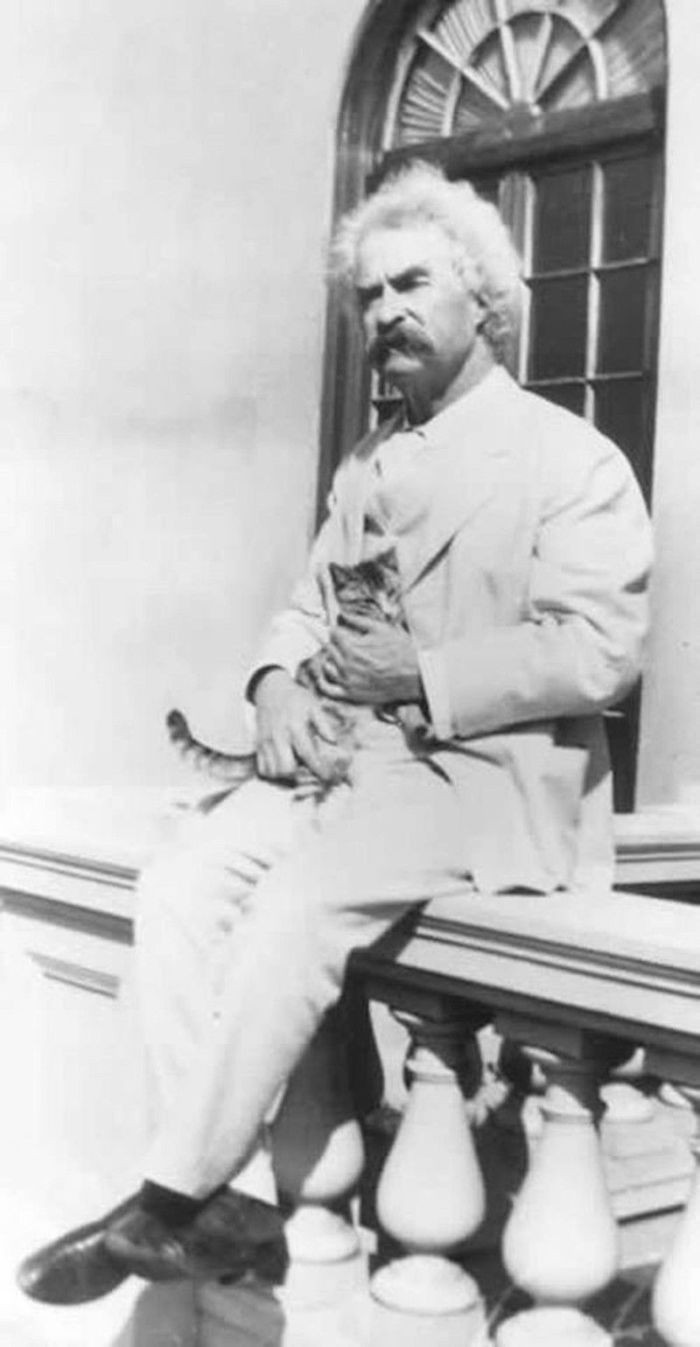 10. Mark Twain wrote about cats more often than we realized.

We love this purr-fect quote from Twain’s 1894 novel, Pudd’nhead Wilson:

A home without a cat — and a well-fed, well-petted and properly revered cat — may be a perfect home, perhaps, but how can it prove title? 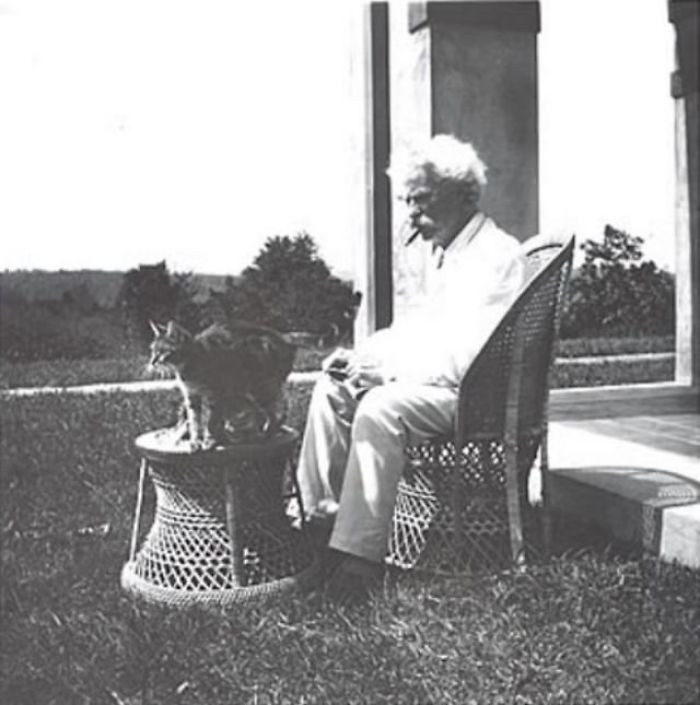 Bambino was one of Twain's cats that originally belonged to his daughter, Clara. One time, Bambino went missing and Twain stopped short of nothing to find the beloved puss:

He “took out an advertisement in the New York American offering a $5 reward to return the missing cat to his house at 21 5th Avenue in New York City,” writes Hutchison. Twain’s description of his beloved pet: “Large and intensely black; thick, velvety fur; has a faint fringe of white hair across his chest; not easy to find in ordinary light.”

Bambino returned on his own. 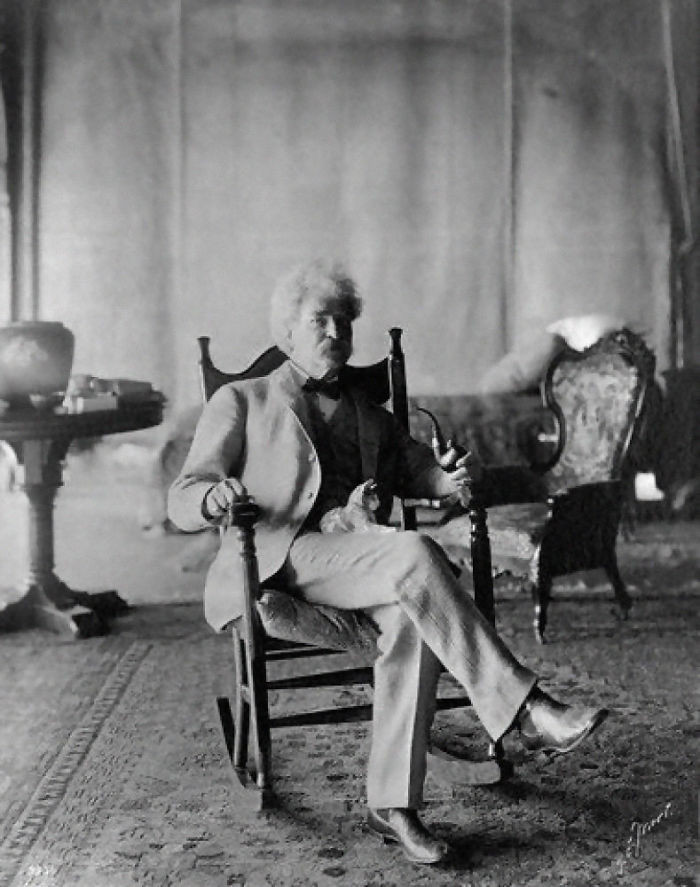 Mark Twain's final resting place is at Woodlawn Cemetary in Elmira, New York. However, we suspect his experience in the potential afterlife must involve frolicking with all the cats who need a love like his. 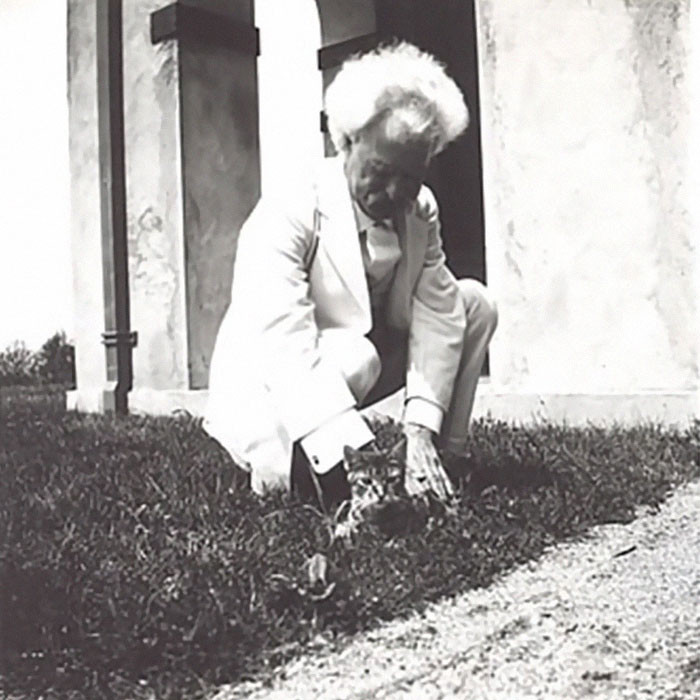 As more people learn about Mark Twain's love of cats, more people are re-discovering their love of Mark Twain. For some, this is just another reason to love the author!

Cats are the purr-fect reason to like anyone more than previously thought.

Of course someone like Mark Twain would love cats, it makes purr-fect sense.

We're sure Twain saw many awful things growing up in the late 19th century, cats are such a happier place.

We'll take this one to heart!

All the love and head boops.

Suddenly, Mark Twain may be a bigger hero to you, too!