Norwegian forest cats are some of the most exquisite and flawless felines on Earth. Their popularity is especially prominent in Nordic countries such as Norway, Iceland, Sweden, and even France and for any cat lover, it's not hard to see why. 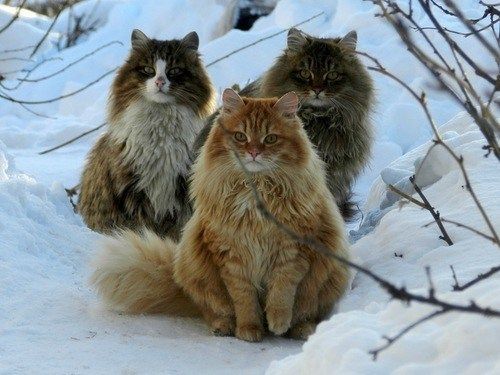 It's not just their popularity that's interesting of course. Their history is definitely fascinating. It's generally believed that these magical looking felines were brought by the Vikings during the early Middle Ages from the British archipelago. From that point, they became accustomed to the harshly cold Scandinavian climate, which in some areas can get as cold as -20 to -40 degrees Celsius. Burr! It's no wonder these cats over time grew fur longer and thicker than typical cat breeds. 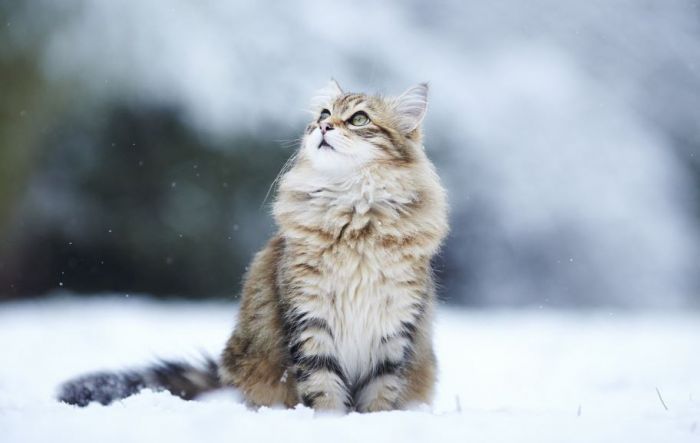 Even more fascinating about this breed's history is their presence in fairy tales, legends, and folklore.

The most famous perhaps being of the Norse God, Freya, whose chariot is pulled by six giant cats.

Freya and some big 'ol kitty-cats. 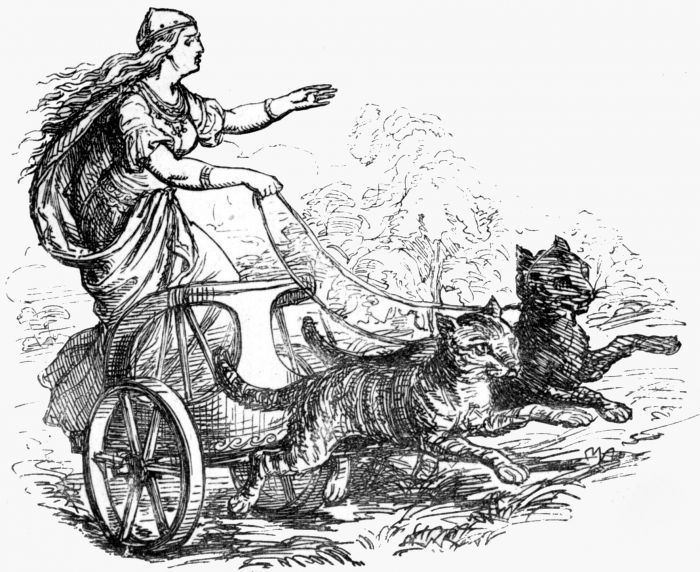 Of course, Freya aside, several Norse legends depict their ancestors as "mountain-dwelling fairy cats with an incredible climbing skill." In fact, the cat ancestors of Norse legends suggest that these large felines served an important purpose on Nordic longboats as mousers while Vikings raided all they could. But of course we also know that as the creatures of legend, they were so much more than mousers.

In fact, in medieval Norway these cats were prized for both their aptitude for hunting and their significant talents in climbing and were quite literally considered indispensable pets on farms.

So, what came after ancient history and how did we end up with these amazing cats around today? Keep reading to find out!

Um, if this isn't THE most beautiful cat you've ever seen then I call your bluff. 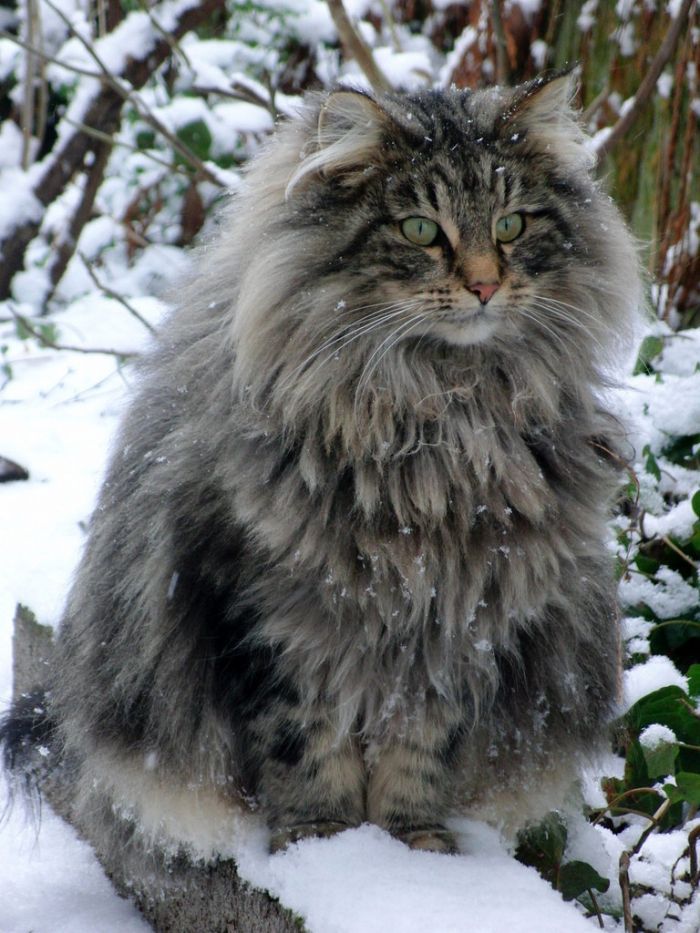 Despite a long-lasting and rich history as cats in Scandinavian countries, these exquisite kitties nearly went extinct during World War II. Thanks to the tireless efforts of

The Norwegian Forest Cats Club, however, they made it through with a rather intentional breeding program and in 1977 they were finally registered as a breed with Europe’s Federation Internationale Feline. Just two short years later a pair of beautiful Norwegian Forrest Cats were transported to the United States for the first time ever and since then they've become an incredibly popular and sought-after breed throughout North America and Europe. 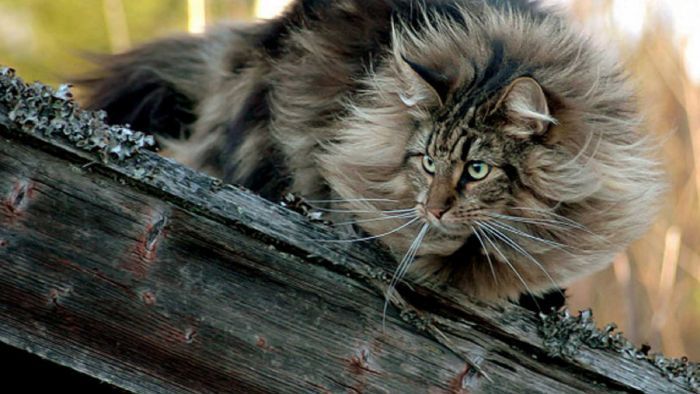 Today, the Norwegian Forest Cat is Norway's National Cat and that's not all there is to this fascinating breed.

They are BIG cats, and we mean BIG. Males can weigh anywhere from 13 to 22 pounds... or more, and females are not far behind in the scales. They typically mature slowly and aren't considered done growing until around 5 years of age!

Large and in charge. 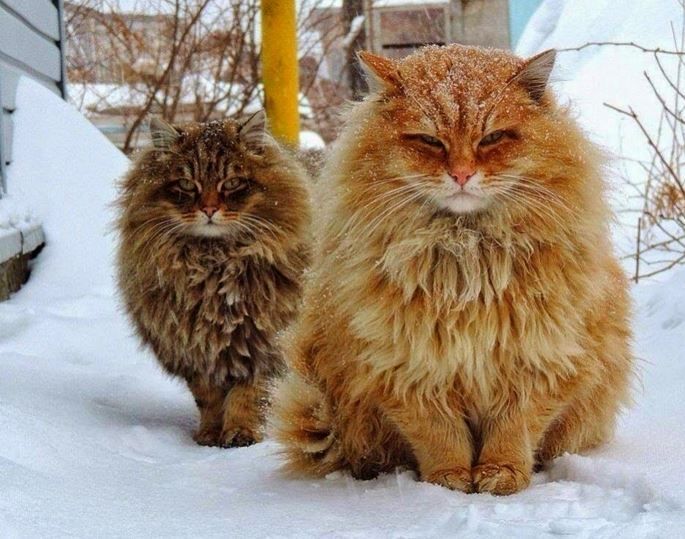 Size aside these cats are not as grumpy as they may appear. Their personalities and dispositions are most frequently kind and gentle and they bond well with their family members. The love they have in their hearts for their human families is ever-present.

They may not always be in your lap but don't be mistaken, they enjoy company quite a bit and are pretty impossible to miss.

By nature, these cats are often alert, as well as considered very intelligent and independent.

They're also phenomenal climbers, that's not just folklore! They will often find their ways to the highest points in your home and if they're outside you'll likely find them up high in a nearby tree, overlooking all they can see.

Let's be real here, folks. They are absolutely beautiful cats and their photos simply don't do them justice. So check out this awesome video! You'll be sure to enjoy every fluffy moment.