Every single day all around the world animals that are abandoned, not cared for and that is unwanted end up in shelters. This means that the shelter needs to care for them now and do their best for the animal, whether it's a dog or a cat so that they can get adopted.

Because shelter life is not the ideal life for any animal because they need the one special human that will love them forever and care for them until the day comes that they need to leave us and go to animal heaven.

It's sad to now people throw away animals and one such incident happened at ACCT Philly which is a local shelter in Philadelphia. They received two orphan kittens that were so malnourished that they needed immediate attention and a good foster home.

One volunteer at the shelter named Shauna immediately offered her help and her home to the two kittens. Unfortunately Loki the weaker one lost his life within 24 hours from arriving at the shelter.

His sister Nebula was a bit stronger and she was still fighting for her life. 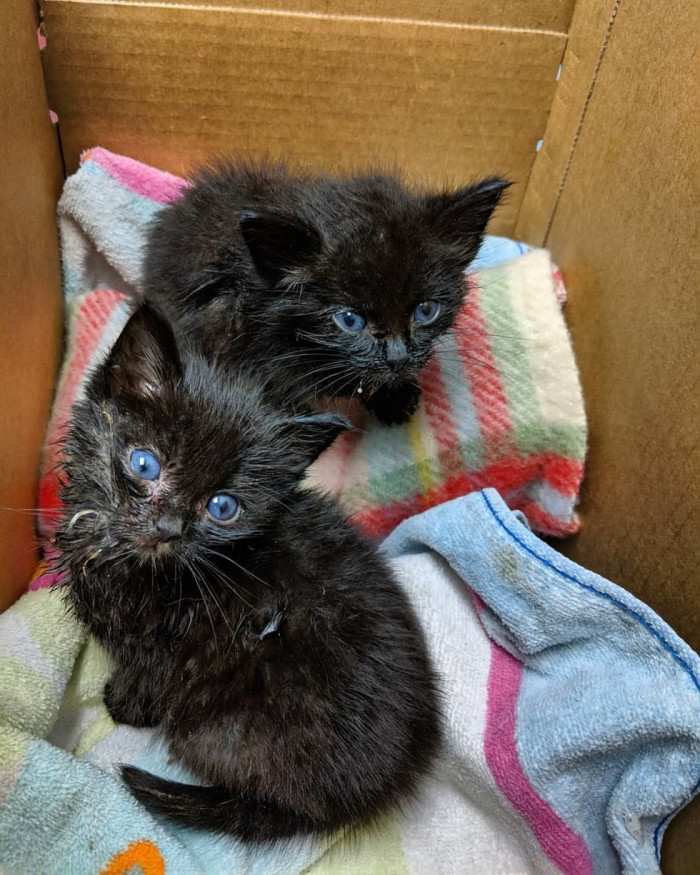 It turns out Nebula was five weeks old and only weighed about 227 grams which are the healthy weight for a two-week-old kitten. It got worse as she didn't want to eat at all and had no appetite.

"I had to syringe feed her for about four days. I was really worried because she was so thin," Shauna said.

She and her brother were orphaned at such a young age, but when she lost Loki she was super lonely. "One day I put the food in front of her and was getting ready to syringe feed her. She literally dived into it and started nursing it." 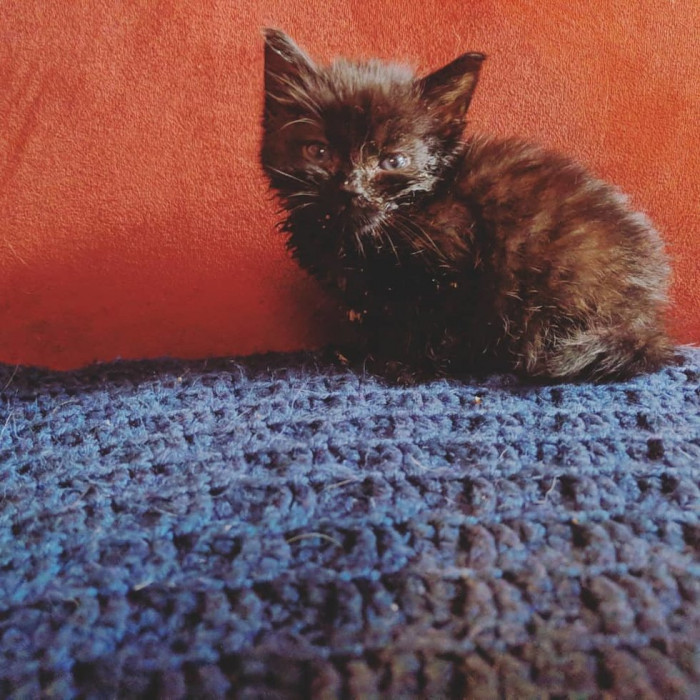 "She would 'nurse' her wet food for comfort. And by nurse, she would shove her whole face and upper body into the food and try suckling on it," Shauna said.

Nebula didn't chew, bite or even suck on her food like normal kittens would, she would just nurse it and ended up covering herself with the food and Shauna had to clean her up after every meal. 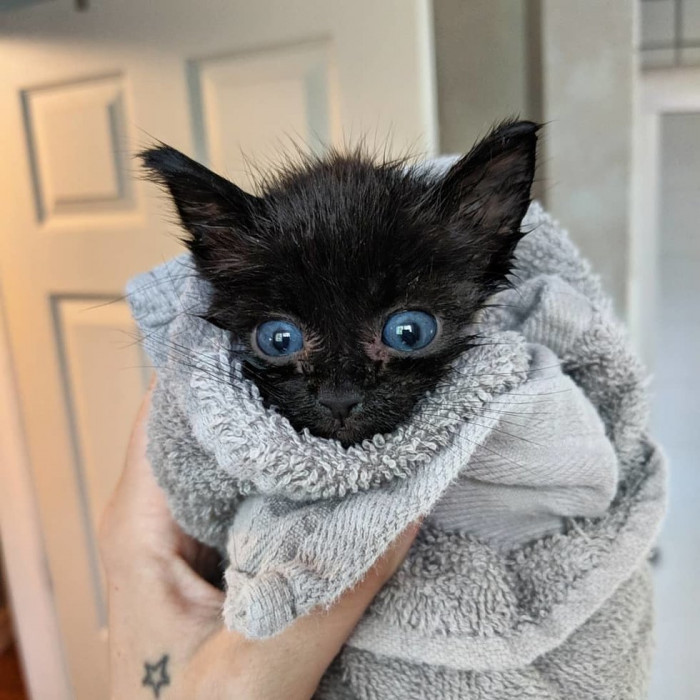 She was very sick and weak so Shauna decided to keep her in a pouch in her hoodie so that she can stay warm and comforted at all times. This led to Nebula always wanting to be with someone. 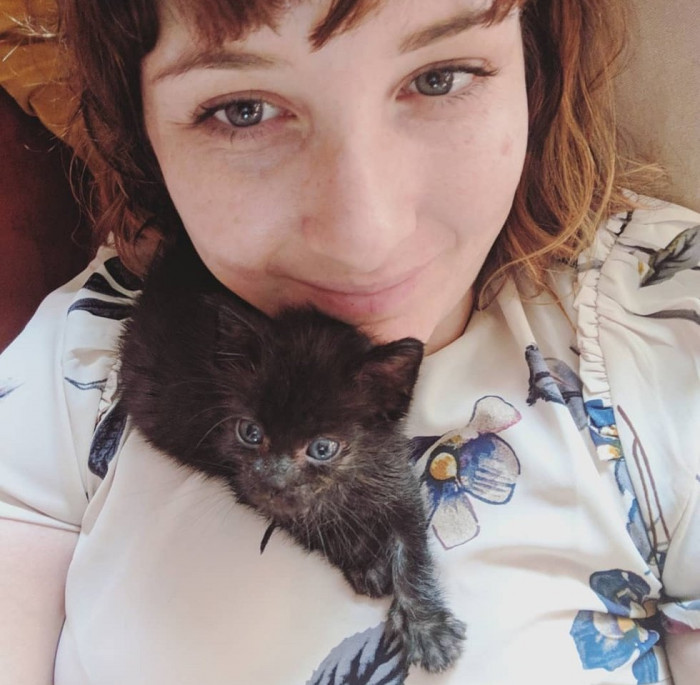 "At first, she would only eat on her own when I held her on my lap and pet her the whole time," Shauna said.

"Later, she just did it all the time. I'd bathed her constantly." 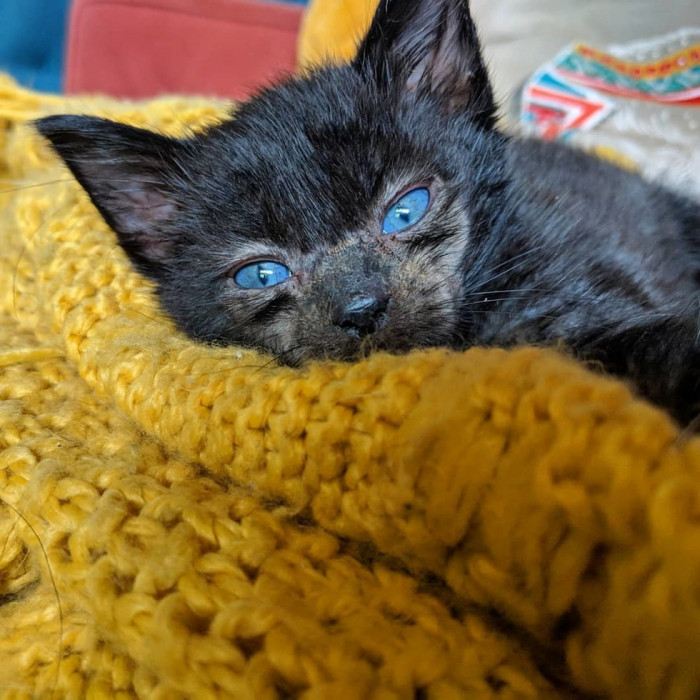 Even though Shauna bathed her after every meal the food caused her fur to fall out around her mouth, "When I noticed the hair loss, I got her to eat dry food and cut the wet food out completely."

That is how eventually the little one learned to chew her food and not comfort it, but something surprising happened then. "That's when the fur started growing back in grey." 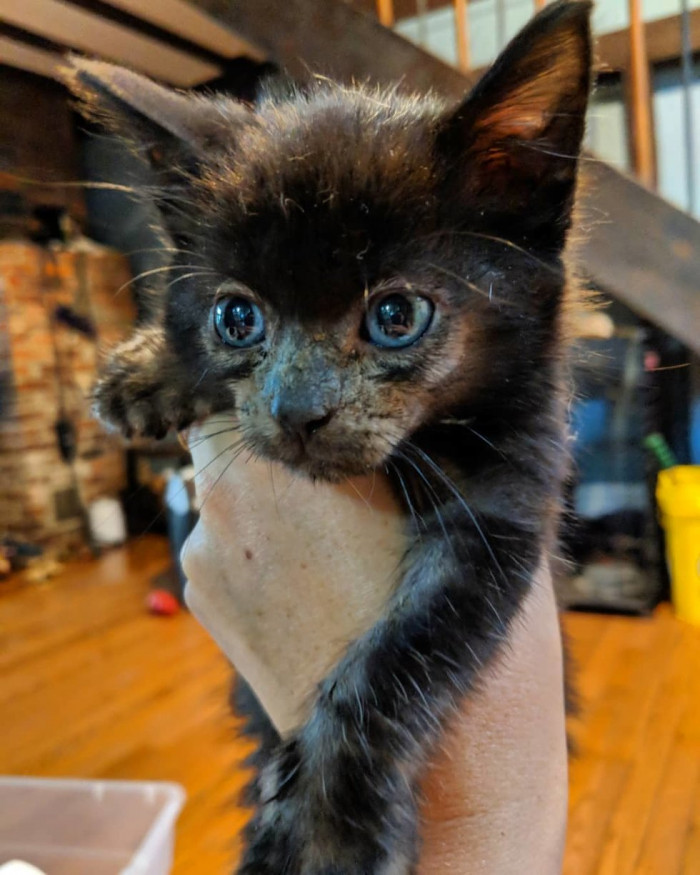 Shauna isn't quite sure why this happened, but only time will tell if her fur will return back to the original color which is black. "Her new fur feels like the rest of her fur. It gives her such a striking and unique look." 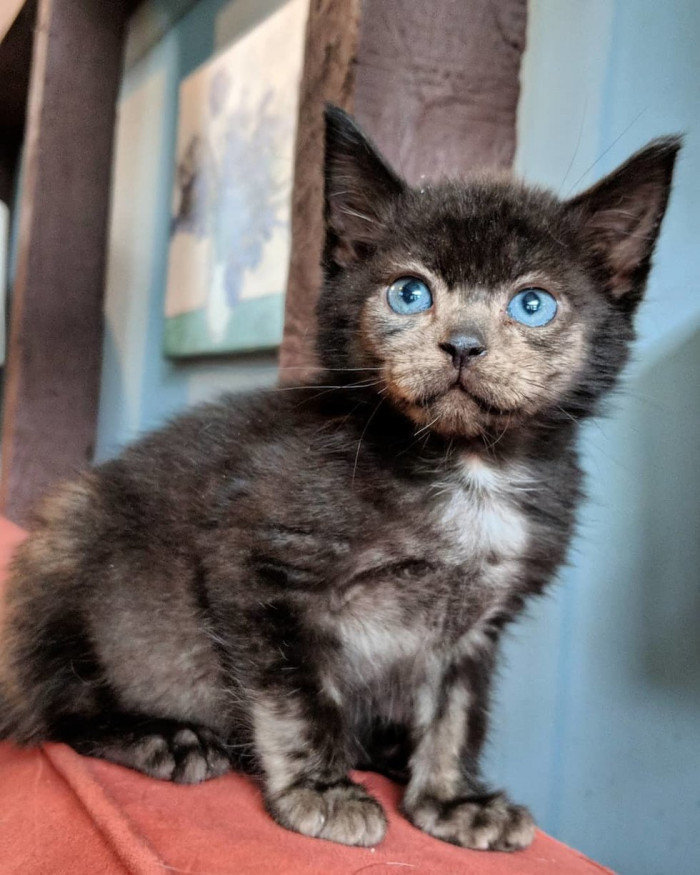 Thankfully Nebula survived her ordeal and is now a happy and playful kitten! "She is extremely active and loves to run around and play. She went from being on death's door when I got her at five weeks old to being absolutely fearless," Shauna said. 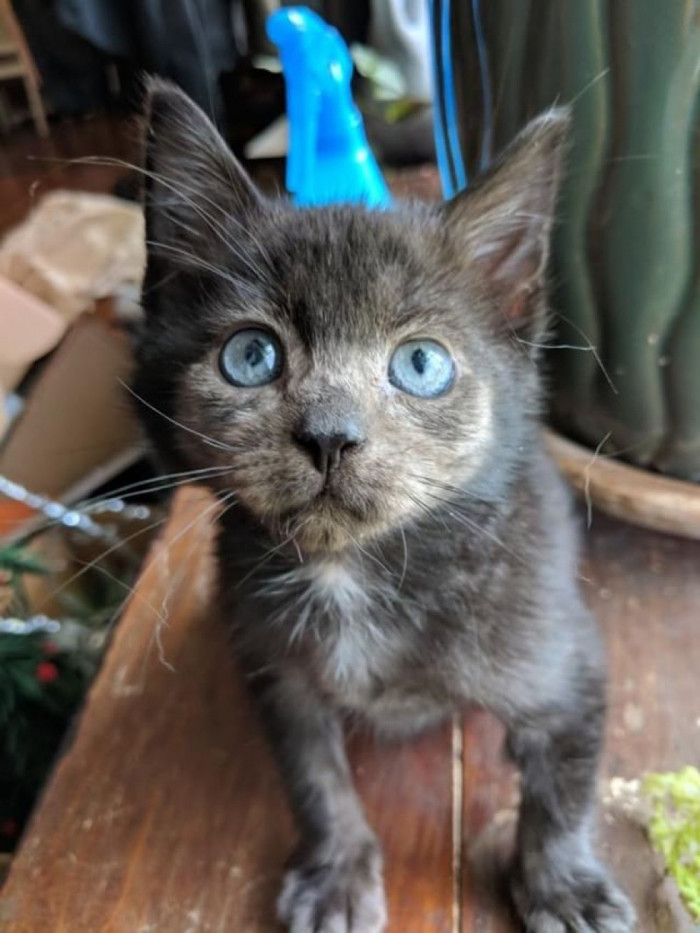 The other great thing about her is that she loves the other kitties that her foster mom fosters. "She has been playing with Edie and Sybil through their pen. She's a little too big and rough for them, but in a couple of weeks they will all be housed together." 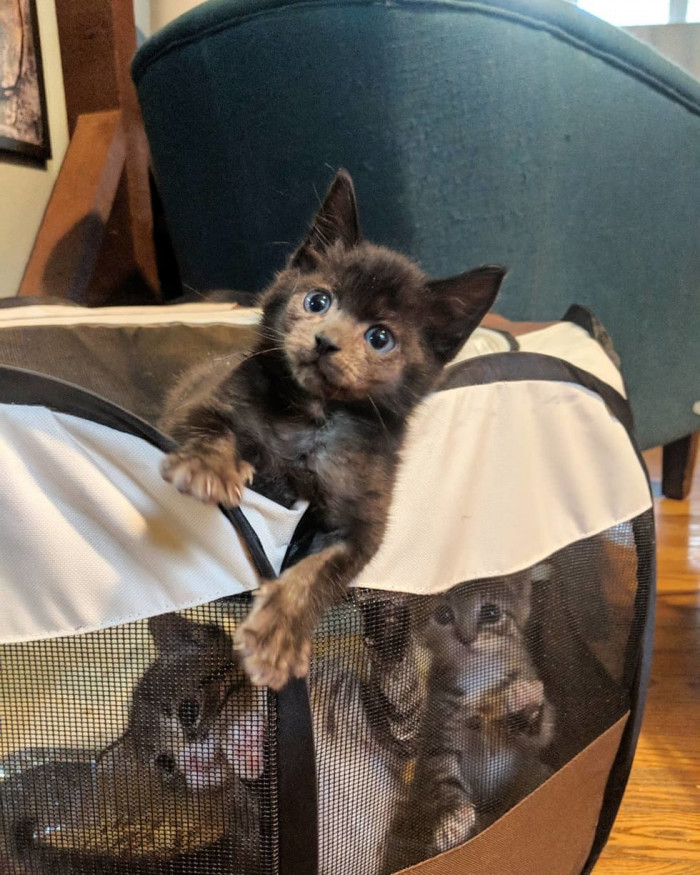 Nebula is now eight weeks old and is weighing a healthy two pounds. She is fun, playful and so loving! She can't wait to go to her forever home. 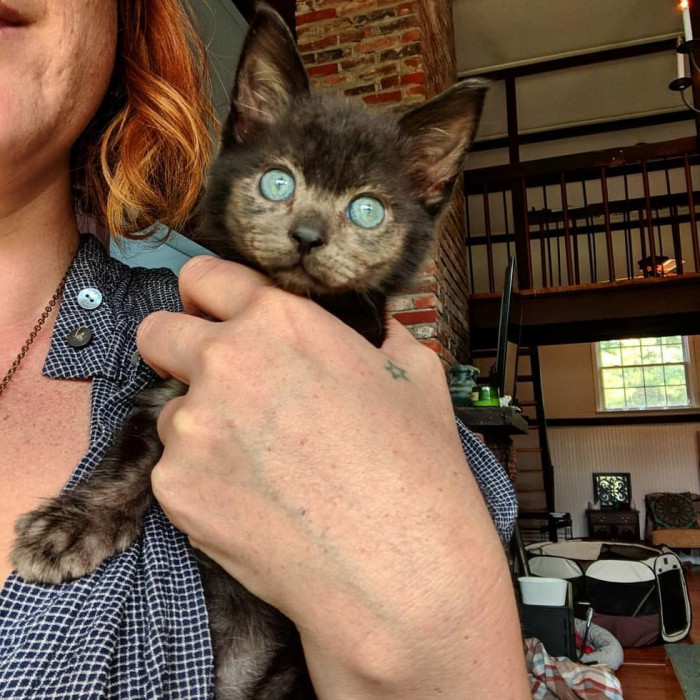 "She has a ton of energy now, and she runs around like a little tornado attacking random objects. She is absolutely adorable," Shauna added. "Now she's so chunky and active. It's amazing how far she has come." 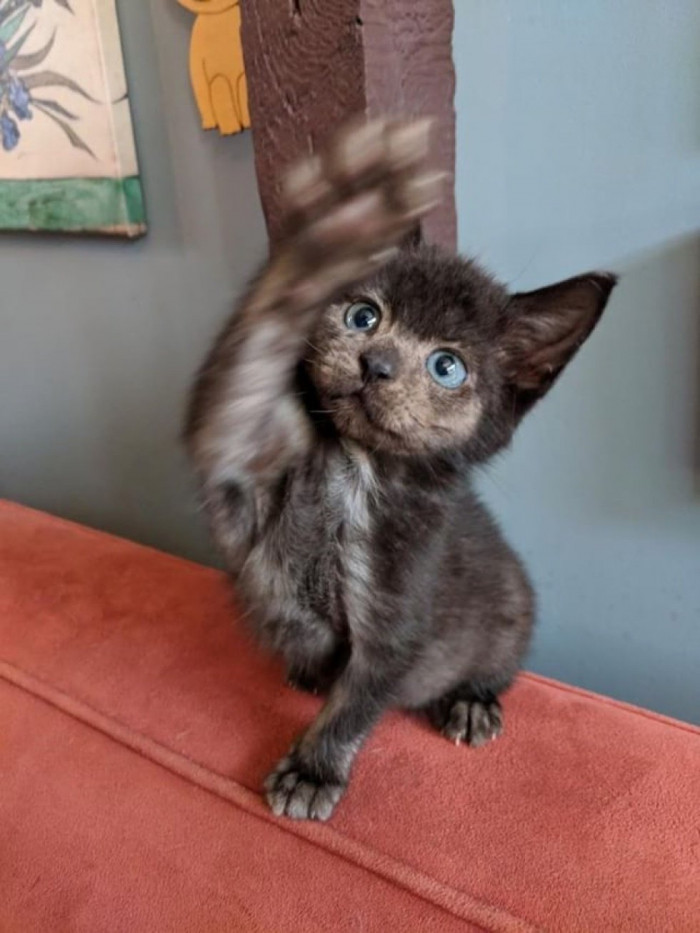