When a pet-owner dies, what happens to their beloved pet? Sometimes the pet is taken in by a family member or friend. But sometimes, there is no one willing or able to take in the poor pet, it ends up in a shelter. This is especially true for older animals, and even more unfortunate that older animals are less likely to be adopted.

It isn't always the case though. This cat, despite only having two teeth and being ten years old, was a very lucky cat. Sadly, other stories don't have such a happy ending, but let's not dwell on that for now; and instead explore Gremlin's tale!

She knew from the moment she saw the grumpy looking cat that she had to take him home and look after him. People tend not to adopt older cats, but Gabriela decided to do so on the spot.

Rather than asking her partner for permission, Gabriela elected to take the cat home, and ask for forgiveness instead!

Look at the difference a month has made!

"It's so wonderful to see him grow, change, and trust us more and more everyday. We call him 'Gramplin' sometimes because of his grumpy expression, but he's anything but the sweetest." 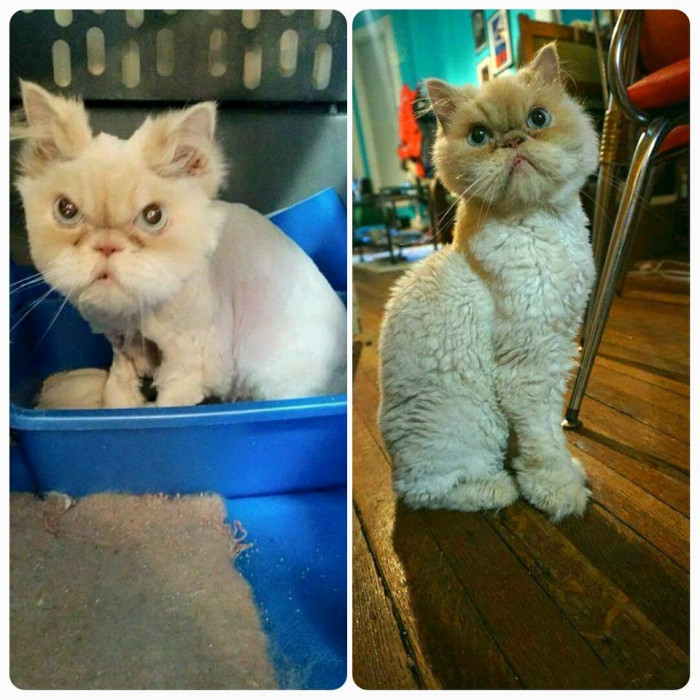 While he hid for the first few weeks, he has now started sleeping on the bed.

Gremlin has now been adopted into Gabriela's family permanently, and has loving siblings, which can be seen on Instagram.